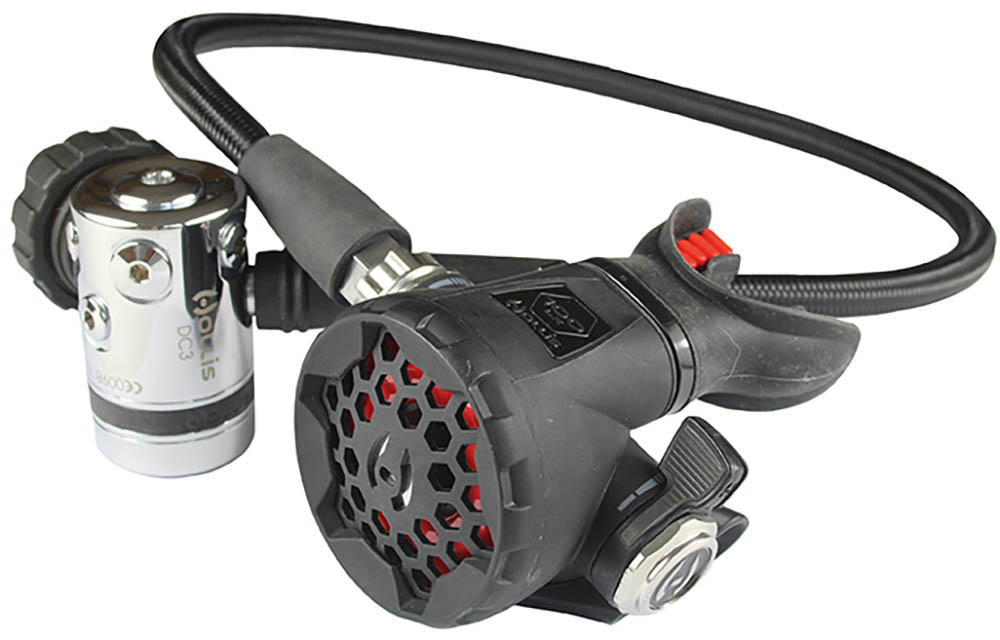 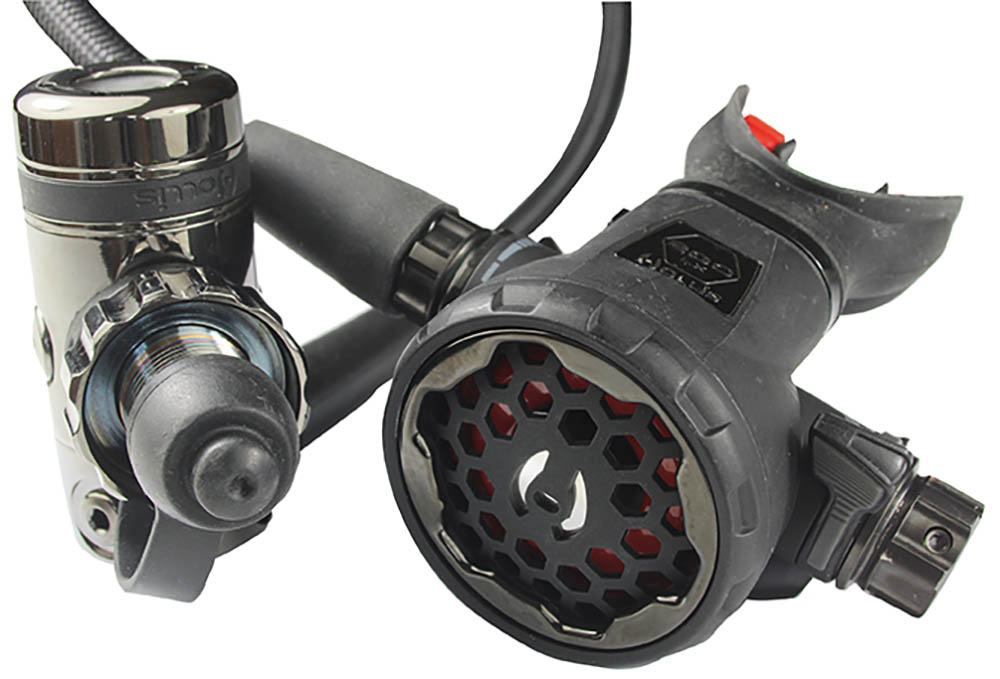 The 2019 regulator market is a fiercely competitve place, with a good number of makers offering finely graded ranges of regulator sets at slowly increasing price-points.

They are differentiated by build-quality improvements as you go up the range, features to set them apart from their competitors and looks to attract new buyers.

Note that I didn’t mention better performance. A few years ago you could buy duff regs. Not any more. These days you can be confident that any reg set you buy will be up to the job of delivering the gas you need.

That’s the reality of the challenge Hollis has taken on with its new LX100 and LX200 regulator sets, and at first sight it has certainly nailed the looks part of the package, with shiny first stages, Miflex lightweight flexible hoses and second stages boasting red highlights on their mouthpieces and behind their purges.

I had assumed that the LX100 and LX200 would be very similar, but they’re completely different products.

The LX100 second stage uses the DC3 first stage. Available in DIN or A-clamp, the DC3 is a pneumatically balanced valve that’s environmentally sealed to prevent internal corrosion, and meets the relevant CE standard for a coldwater regulator.

Four low-pressure and two high-pressure ports are spaced around the outside of the regulator, which means that there’s plenty of room for two pressure gauges, say a manual SPG and a computer sender, plus main, octo, BC and drysuit-inflation hoses.

A couple of the ports do slant backwards a bit, so routeing might not be ideal, but the upside is a compact, lightweight set.

The LX100 second stage is made of black polymer, set off by the red and black orthodontic mouthpiece and the red cover for the diaphragm hiding behind a honeycomb front mesh that forms the purge.

As supplied, the second stage is set up hose-right to run over your right shoulder, but the hose can be swapped over if you wish. Hollis says you don’t need any fancy tools to make the swap, which is always nice.

There’s a simple venturi lever to set pre-dive and dive modes, and that’s it. You could say it’s basic. I prefer to call it simple, where simple equals everything I need and nowt I don’t.

The LX200 is the new Hollis range-topper, and the manufacturer says it is intended for extreme environments. The first stage is the DCX, which offers two hp ports on the barrel of the regulator and a rotating turret with four lp ports around the perimeter and a fifth on the top.

Visually, the LX200 second stage looks very similar to that of the LX100, the only real difference being a breathing-rate adjustment knob in addition to the venturi lever.

Both reg sets looked good when I unpacked them, oozing that all-important shelf-appeal.

The PVD-plated LX200 set was especially cool-looking, with the plating giving a sheen to the metal that made the second stage stand out among chromed valves.

I was a little concerned at first that the black polymer bodies of both the LX100 and LX200 second stages were susceptible to handling marks, but in use that wasn’t the case.

What had initially looked like small marks in the polymer were simply shrugged off.

Had I been shopping at my local dive-shop and seen these regs I would have wanted a closer look, my only reservation being that both the second stages looked a bit long, front to back, making me wonder if they might cause jaw fatigue in the water.

On the other hand, Hollis suggests two-year service intervals, and offers a lifetime warranty and free parts for life.

Looks are one thing, but real-life performance is the only real test, so time to get the regs wet.

I know I should drag it out and keep you guessing with a careful blend of positive and negative comments, but I’m not going to.

Both the LX100 and LX200 breathe beautifully, with a silky-smooth quality to their gas delivery, and were pretty much identical as far as my non-ANSTI-calibrated lungs were concerned. I’d be happy to use either in terms of their breathe quality.

I started with the LX100, which screwed into the cylinder-valve with enviable ease and smoothness. DIN threads can sometimes feel a bit scratchy or bind a bit, but the LX100 was exemplary.

Opening the cylinder-valve can also be a bit of an event sometimes as everything comes up to pressure and the hoses go rigid, but not the LX100. In fact, had the needle on the contents gauge not moved, I wouldn’t have known that the set was pressurised.

As I pulled the BC on I caught the purge of the LX100, and because I’d stupidly left the venturi lever in the dive position it freeflowed lustily until I flipped the lever and shoved a finger across the mouthpiece.

The LX200 will also do this if you have the breathing-resistance knob set at minimum and the venturi lever in the dive position, but it isn’t a fault, just a measure of how finely the cracking pressure of the two second stages is set.

The mouthpiece of the LX100 fitted my mouth and teeth well, with no trace of insecurity and no jaw-fatigue even after an hour in the water. I put this down to the mouthpiece design, because the inner curve of the exhaust T didn’t quite sit on my chin with either second stage.

My preference is for Comfo-bite mouthpieces, and have been known to swap to them even on new regs, but I wouldn’t feel any need to change these Hollis mouthpieces, so my one initial reservation had been neatly dispatched.

In a normal horizontal trim the LX100 breathed very well, cracking at the slightest inhale but not blasting air down my throat, even when it was abused by my panting and gasping as hard as I could.

Going vertical, head-up or head-down, rolling around or laid on my back and taking it easy, the breathe felt equally smooth.

I was having one of those days when my mask, normally dry and tight as the proverbial duck’s wossname, was leaking persistently and fogging continually, so rolling on my back had dribbles of water running around the inside of my nose. This was not nice, but the LX100 certainly wasn’t misbehaving, and simply continued to deliver gas perfectly.

Big tick from me. Like it. Time for big brother.

I’m not going to ask you to re-read all that basic stuff again; take it from me that the LX200 works as flawlessly as the LX100, with extra tunability from the breathing resistance control knob, if you feel the need to twist it.

I might have remarked before that I don’t really understand the point of these knobs. Why drop large amounts of hard-earned cabbage on a high-performance reg set, then de-tune it?

How many Ferrari owners go back to the garage asking for their new car to be made slower?

But I do know there are those of you who will disagree and, for you, the control works well.

Fully open and the breathe is smooth and high-volume without being fierce. Closed, and you need to suck a bit, but never to the point at which you feel as if you’re having your first asthma attack.

If you want a second stage with breathing resistance adjustment, this one works well. That means another big tick from me.

The venturi levers on both second stages were easy to locate and move with a gloved hand, and the BRA knob on the LX200 was equally easy to twiddle even with my Kevlar dipped 5mm gloves.

Both also purged progressively and easily, allowing full control over the amount of gas that the purge swooshed through the second stage.

So that’s it. I’d be comfortable using the LX100 or LX200 for tech or rec, cold or warm water. In fact, the more I reflect on the gas-delivery of these sets, the more impressed I am – there’s a smoothness to the gas-flow that’s hard to describe but makes them very nice to use.

I’d be tempted by the lower price of the LX100, but I really like the idea of the tougher coating on the LX200. Regardless of which you plump for, these are good regs.