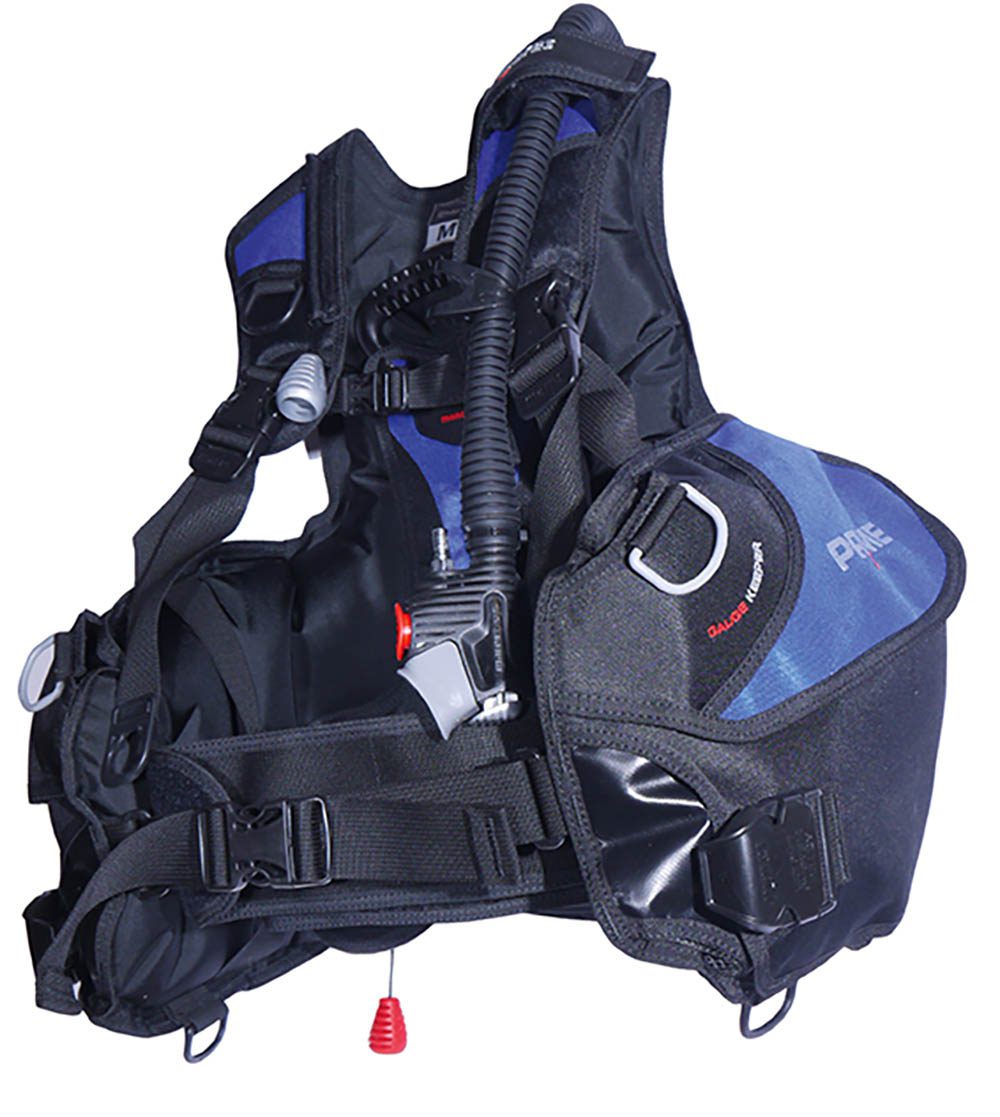 THE MARES PRIME UPGRADEABLE is a low-cost BC from the eponymous Italian company founded by Ludovico Mares in 1949.

Mares is one of the big beasts of the recreational diving industry. Like some other European brands, it began by making equipment for breath-hold spearfishing.

By co-operating with North American companies, it was able to take advantage of their engineering skills and pull ahead of other European competitors still struggling to move into scuba equipment.

From Voit (long gone, but think dive-gear in the classic Bond flick Thunderball), Mares acquired the vortex-assisted design bypass tube that gives Mares second stages their distinctive look. Later it worked to design BCs with Sea Quest, before that company was absorbed into the Aqua Lung group.

To help penetrate the North American market, in 1999 Mares also bought out Dacor, one of the USA’s most innovative manufacturers. The HUB-integrated BC and regulator packages were one line that was sold under both brand names, before Mares dispensed with the Dacor pedigree altogether.

Not content with selling diving kit, 2014 saw Mares take over training agency SSI, which had been successful in Europe and now snaps at PADI’s heels in the UK.

Like other major scuba manufacturers, Mares has footholds in the extremes of technical and freediving as well as its core recreational scuba range, from which the Prime originates.

The name Mares Prime Upgradeable refers to the fact that this product can be upgraded to a weight-integrated BC. In its basic form, the Prime is a single-bladder jacket-style BC with adjustable breakaway shoulder-straps. It’s sold set up for a single cylinder, and its market is recreational, rather than technical divers.

This style of BC is the most popular among single-tank divers, but a twinning set is one of the available options. The jacket is made from 420-denier Cordura, which can be expected to last many years with just a little care.

The backpack has the normal flipover nylon camband that stows easily for transport. There’s a loop to slip over your tank-valve to set the height at which your Prime sits.

The pack has a top handle and is padded down the spine and over the wings that sit over your hips to spread the weight.

The shoulder-straps have fixed-position buckles, and a fixed-position chest-strap and waist-strap fastens over the cummerbund. The releases are standard pinch-clip types.

The cummerbund has touch-fastener closure on its front and can also be adjusted for length where it joins the backpack. This means that if you’re lucky enough to be thin, you can shorten the cummerbund at the back so that it won’t be too long to close over your waist.

When fully inflated, the Prime expands inwards a little. The amount of squeeze is moderate compared to other BCs I’ve tried, but to prevent any breathing restriction it’s best to half-inflate the Prime before snugging up the straps.

The Prime got the longest out-of-water comfort test of any BC I’ve evaluated so far – a full kilometre walk, including two flights of steps, that allowed me to access deep water from the shore for a regulator assessment.

That was just one way – I had to walk back afterwards! Supporting around 19kg, less than other BCs I’ve tested because it was not configured for weight integration, the Prime proved very comfortable.

For an underwater photographer and occasional video cameraman like me, stability is very important. If you ‘re unstable, stills pictures, especially close-ups, are hard to compose accurately, and what should be smooth video footage turns to wobblecam.

Even if unencumbered by cameras you’ll usually want your BC to float you as close to horizontal under water as possible.

This will keep you streamlined, so that you use less energy and consume less gas when swimming, especially into current.

By preventing your feet from dropping down behind you, you are also much less likely to hit coral or kick up silt.

The Prime was very stable under the water, and horizontal trim was faultless. It remains very stable if you come to a head-up position to hang upright or descend or ascend vertically.

Surface flotation is also good. The Prime held me comfortably upright, so I wasn’t expending energy finning to keep myself from pitching forwards or backwards.

When properly weighted with a full tank, the Prime floated me with my mouth about 15cm above the waterline.

This is enough to support a diver who is on the surface in as much swell as sport divers normally contend with, allowing them to breathe with their regulator out, as they might need to do if they’ve run out of gas.

The Prime uses Mares’ standard Ergo inflator. For oral inflation there’s a pipette-style mouthpiece, so it’s quick and easy to inflate this BC orally under water or at the surface.

You might need to inflate orally under water if your direct-feed jams open and you have to disconnect the hose – this can happen if sand gets into the mechanism, for instance.

If you’re out of air at the surface, you might also need to blow up your jacket by mouth in order to float.

The Ergo’s inflate and deflate buttons are easily distinguished by shape and by colour.

In tests, the Ergo fully inflated the medium-sized Prime I used with a volume of 16.5 litres in about nine seconds. This is a little slower than some of its competitors.

I have used both slow and fast inflators and it doesn’t make much difference to routine buoyancy control – it’s more that the user adapts to whatever the rate of inflation is, and getting it right soon becomes muscle memory.

The Ergo isn’t progressive, meaning that it doesn’t fill your BC faster if you push harder.

The Prime is equipped with three dump-valves – pull-cord bum- and shoulder-dumps and one built into the oral-inflation hose-elbow, activated by pulling down on the Ergo inflator.

This BC should dump faster than it inflates, which is a CE standard that any BC must meet, to ensure that a jammed-open direct-feed won’t cause a runaway ascent.

To test this under water, I opened the shoulder-dump, then the elbow-dump in turn while pressing the direct-feed. The Prime passed exactly as it should.

I also wanted to check how quickly a run-away ascent could be stopped. I tested in the usual way by hanging onto a piece of solid shipwreck at 10m, fully inflating the jacket, then letting go as I activated either the shoulder- or elbow-dump.

The previous test proved that the elbow-dump can dump air just as quickly as the shoulder one, but my advice would be to go for the Prime’s shoulder-dump if you need to bring an ascent under control fast. For routine dumping, the elbow vent works fine.

The Prime is equipped to take integrated weights, but these are not included. Mares has its Standard Buckle Weight System, which uses weight-pouches that slot into the BC, behind the pockets. They are jettisoned by simply pulling on the grab-handles.

To protect the bayonet clips from damage, the Prime is supplied with caps.

My buddy Nick Balban, a diver of more than 25 years experience and Diving Officer of my host, Gibraltar Sub Aqua Club, mistook these for indicating that I was diving weight-integrated. This underscores the importance of a buddy-check if you’d like to make it a little easier for your partner to effect a successful rescue.

The Prime does not have rear-mounted trim-weight pockets, although aftermarket pouches could be fitted to the tank-band.

There are five plastic D-rings. The two pockets are closed using touch-fastener flaps. The pockets are tight – you’ll struggle to fit a full-size reel. You can coil your pressure-gauge or octopus-hose into the gussets behind the pockets.

Provocatively, Mares designates the right-side D-ring for the octopus-holder. I wear my octopus on this side, but many will strongly disagree with that.

Perhaps with an eye to the rental market, an oversized label indicates the size, so it’s easy to see on a rack. Sizes range from XS to XL, with lift between 14.2 and 24 litres or kilos. The Prime weighs in at between 2.5 and 2.9kg.

Overall, the Mares Prime Upgradeable is a very creditable performer. It is an extremely stable BC under the water, and also performs well at the surface. As a long-time convert to diving weight-integrated, if I was buying one I’d add the weight-pouches from the start.

My thanks to Nicky Martinez for taking the photographs.