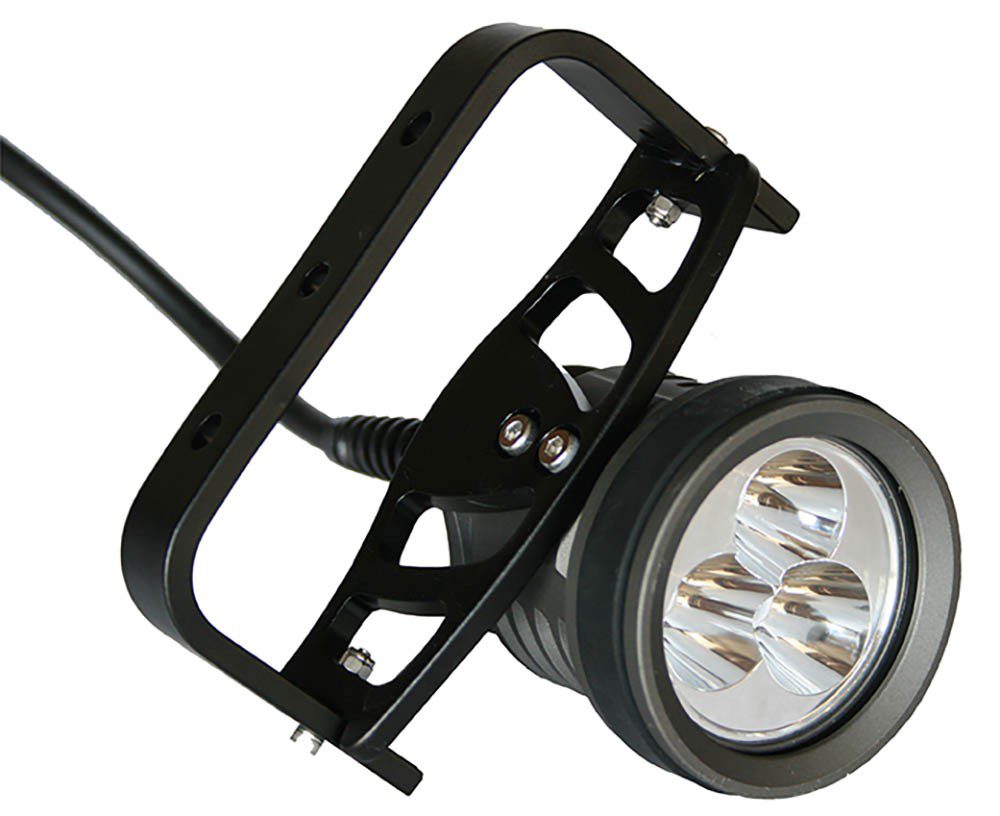 I’VE BEEN DIVING FOR 30 YEARS OR SO, and while I acknowledge that this isn’t so much as a pimple on the rear of the amount of diving some of you have done, I submit that it’s a decent stint and I’ve seen some changes.

The most profound of these has been the universal adoption of computers and nitrox, but the most noticeable has been the revolution in lighting.

One of my odd diving memories is of coming across a Scubapro diving torch lying on the deck of Thistlegorm in the Red Sea during a night-dive.

It wasn’t switched on, which is probably why nobody had noticed that it had been lost, so I picked it up and decided to give it a try.

Off went my old-fashioned torch with its incandescent bulb throwing out not very much yellowish light, and on went the daylight-blue LED Scubapro. Great day in the morning! Who turned the sun back on? It was a revelation.

That Scubapro had a claimed output of just 230 lumens, and used C-cell batteries.

I now have a teeny-weeny little torch claimed to output 300 lumens that runs for a full week of night-diving on three AAA batteries.

Just imagine, then, what 3200 lumens did to my optic nerves. That’s the output of the new Mares XR DCT, one of a set of three new extended-range canister lights, each of which I was sent to test.

Each light comes in a nicely fitted case that also contains the Mares-branded batteries needed to power the lights, a big, chunky battery-charger with all the leads and fittings that allow you to plug it in anywhere in the world, plus a disassembled Goodman handle.

You’ll need to find a camband to strap the canister to your cylinder, but that’s all that’s missing from the box.

The three lights are the XR DCT, which has

All three lights share the same excellent build quality and are almost indistinguishable, apart from the smaller battery-canister on the DCTS and the six-LED head on the DCTV.

The battery-canister simply unscrews when you need to get at the batteries. They’re sealed with three O-rings and you get spares in the kit. The umbilical cords measure 125cm.

The batteries come part-charged, so the first job was to charge them properly. The three-battery models use a charger that lights up to tell you it’s working, with a small screen that shows that each of the three cells is charging correctly.

When charging is complete, the lights and screen go off and the unit sits there in darkness. It’s a personal preference, but I do prefer a positive indicator that something is working. A light to show that the batteries are charged and the unit hasn’t just died would be good. And that’s just what the two-battery model has, with a red light to show charging that changes to green to show charged.

While the batteries were charging, I assembled the Goodman handles. Each light comes with a two-part handle and a bag containing two Allen keys, a small spanner and various spring-washers, set-screws, nuts and bolts to put it together.

It’s not a big job, but I will point out that the lovely fitted case in which each light is supplied is no longer usable when the handle is attached.

Time for the bucket test, in which each lamp was turned on at full power and left to run flat in a bucket of water. All three ran for longer than their claimed burntimes, and didn’t emit much heat. The water in the bucket never got above room temperature.

Recharging the batteries took around five hours using the three-battery charger, and a bit longer for the two-battery unit.

Next up, I measured the light outputs of the lamps. Each has a simple magnetic push-switch. Press once for full power, again for medium, then low, super-low and off. Press and hold the button and the lamps flash. Don’t try this in a small room.

The maximum output of the two spot-lamps seemed to be the same, but was at the very top limit of the light meter I used for the test. Medium and low powers were each around a stop less, which means that the light output halved at each step down.

Super low was a good three stops less bright than low, which equates to an eighth of the output. Both beams had a very bright centre spot, surrounded by a less bright and still tight halo.

The video light measured much less powerful, but the beam was much, much wider. I measured a pretty constant output to around 70°, then a drop of a stop to the claimed 120°.

Use it as a video light and it will show some vignetting at the edges of the frame of your action camera, but not enough to be noticeable in real life.

And then it was time for an open-water trial.

I used a spare camband to attach the battery-canister to the dil cylinder of my rebreather, and ran the umbilical cord over my left shoulder.

If I planned to use the lights long-term, I’d refine the set-up, but the canister nestled beautifully between cylinder and scrubber-canister, and that was all I was looking for to start with.

The Goodman handle supplied was nicely judged for size, easy to hold with either a bare or gloved hand, and the operating switch was easy to locate and push, even with a thickly gloved hand.

The necessity to cycle through the power levels to switch off was a bit irritating, but not too much of a chore.

Lighting-wise, the lamps did exactly what they were supposed to do. The spot-lamps threw a powerful light a long way through the water and delivered more than useful amounts of illumination, even in low vis.

On a deep, dark UK wreck either the DCT or the DCTS would do the business, with enough battery-life for a decent bottom time.

The video light didn’t penetrate as far, of course, but it was broad and even, and as a filming combination the DCTV in one hand and an action-camera in the other is viable.

If you’re in the market, these lamps are more than worth a look.