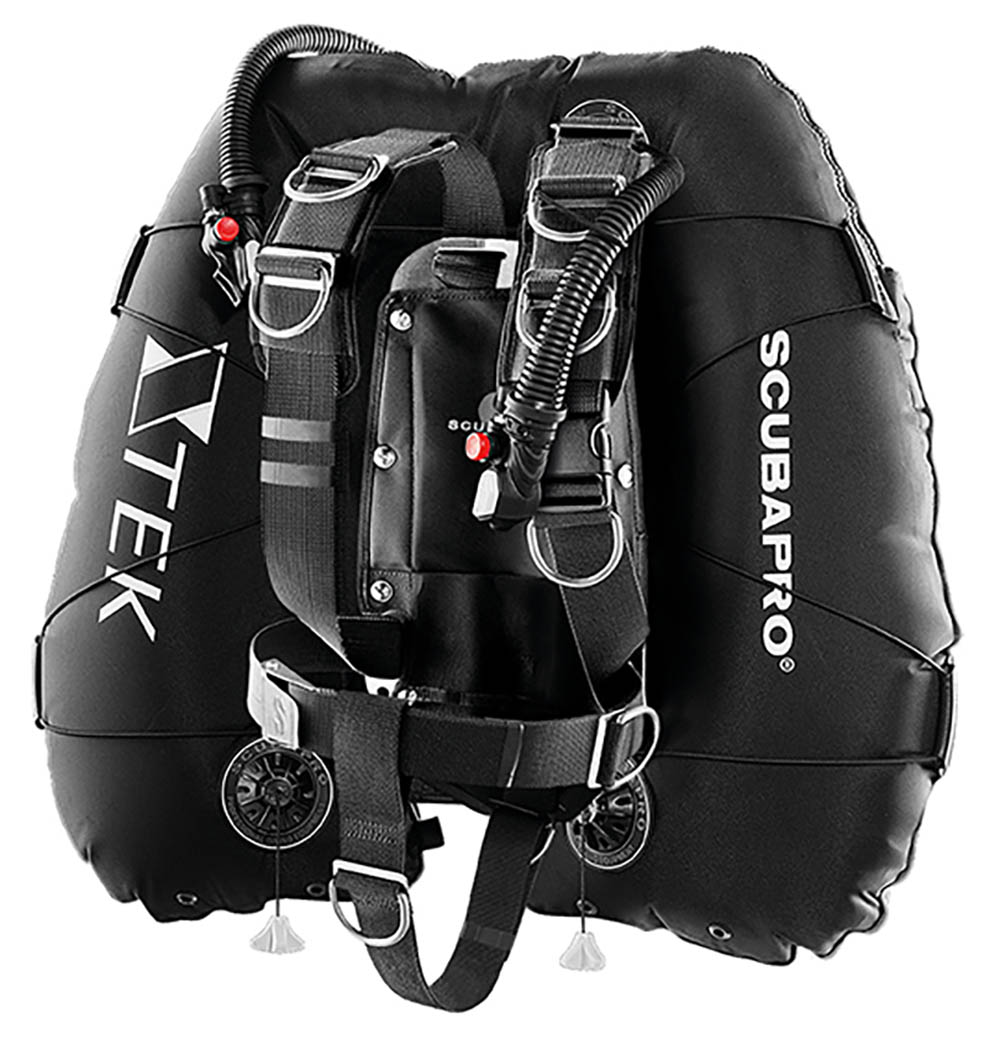 ONE OF MY PET HATES is seeing divers working hard and struggling with neutral buoyancy because they’re overweighted and have had to over-inflate their BC to compensate.

Use as much lead as you need, sure, but as little as you can safely get away with. That way, it’s amazing how little extra buoyancy you actually need.

But, he said, climbing down off his soapbox and looking thoughtful, there are times when you need a big range of buoyancy adjustment. That’s when a big wing’s the only game in town.

Use a twin-set of bottom gas and a pair of stages for deco, pretty much the norm for open-circuit tec, and you can find your weight changing by the best part of 10kg during the dive as you consume the gas. Suddenly a wing with a lot of potential buoyancy makes sense.

Which brings me to the Scubapro X-Tek Pro System Extreme harness and 27kg wing, offered as a package from an extensive Scubapro range of harnesses and wings.

The harness webbing of 50mm-wide ballistic material is threaded through a 2mm stainless-steel backplate all in one piece except for the bit at the bottom of the left shoulder-loop, which features a sturdy pinch-buckle to make de-kitting easier.

I know some people see pinch-buckles as a potential failure-point, but I have never seen one fail. Made of near-indestructible plastics, failure is so unlikely that the thought has never crossed what passes for my mind while diving.

Both shoulder-straps feature some padding. It isn’t thick, but it’s wider than the straps and will help protect the shoulders of your suit and ease the apparent weight of your twin-set, though nobody moves around the deck of the dive-boat any more than they need to once the cylinders are in place.

Two D-rings feature on each shoulder-strap. The left strap has a loop of bungee into which I stuffed the left direct feed to keep it handy.

The waistband has a D-ring ready-mounted on the left side, but there’s no D-ring on the right. Adding one from the spares box was easy, but not supplying one seems a bit naff.

The X-Tek Pro Harness does, however, have two D-rings on the crotch-strap, one front, one rear, and the chunky stainless-steel lever-action buckle on the waist-strap was excellent.

The backplate is nicely shaped to fit your back, has a sufficiently deep V to accommodate the bolts from your twin-set and is long enough to sit on your hips rather than your lower back. I’m five-eight, and there was enough backplate and some to spare.

A padded cover on the inside adds comfort. There’s additional padding at the base of the backplate where it sits just above your bum.

This wing features double bladders for redundant buoyancy. Some argue that a drysuit already provides such redundancy, but plenty will shudder with distaste at the idea of using a drysuit for that purpose. If you dive in a wetsuit, you have no redundant buoyancy anyway.

The wing is the traditional horseshoe shape, with much thicker legs that widen even more toward the bottom to keep as much buoyancy as low as possible when the wing is fully inflated, such as at the surface post-dive.

How to describe the fully inflated wing? You know those reassuringly buoyant tubes on the club RIB? That. Permanently attached bungee-cord keeps the wing tidy when not inflated, and helps squeeze gas out There are two corrugated hoses, each with a Scubapro Balanced Power inflator, one on the inner surface of the top of the wing, the other on the outer surface on the opposite side.

Both will rotate, so you can route the hoses as you prefer, and one has a webbing keeper to make it simpler to dress.

Each corrugated hose features a loop of plastic with a cap to keep the hose from your first stage neat and tidy. The cap covers the nipple on the inflator unit to protect it when not in use. It’s a nice touch.

There are three dump-valves at the bottom of the wing, two on one side and one on the other, with big, chunky, moulded plastic knuckles to grab to dump gas.

To attach the wing to the harness, you pass the bolts of your twin-set through holes reinforced by metal eyelets in the centre panel of the wing, then through the equivalent holes in the backplate, and finally secure them with nuts on the inside of the backplate.

You’ll need to remove the padded cover on the backplate, and Scubapro thoughtfully provides a CD with pictures to help.

You can also thread cambands through slots in the wing and backplate to use it with a single cylinder, but why would you? Use the harness you’ve painstakingly adjusted by all means, but mate it to a smaller wing from the range.

In use, the almost-one-piece harness does require you to spend some time getting the straps adjusted to fit. It’s not a difficult job, but expect to end your first couple of dives with tweaks to make to get an exact fit, and perhaps to trim the straps to length when you’re done.

I’m not saying the straps are over-long, but you’re unlikely to run out of length, whatever your shape and size. Scubapro provides lots of elastic straps to tidy trailing ends of webbing.

Once adjusted, the easiest way to get into a harness like this is to spread the shoulder-straps open, stand with your back to the set and your arms held behind your back and then sit down into the set with your arms sliding into the straps.

You may need a bit of a shimmy to get the straps on your shoulders, and still need to pull the crotch-strap up front and centre and thread the waistband through before buckling up.

Even deflated the wing looks big, but empty there’s no buoyancy to speak of, and the stainless backplate more than compensates.

Add your twin-set and you’ll find yourself taking weight off your belt.

The other thing the extra bulk suggests is greater water-resistance, making swimming harder work. It hasn’t and it isn’t.

This wing has the most remarkable attraction to a perfect horizontal trim I have experienced. I could go head-up or head-down easily enough, but it really wanted to be horizontal and level and kept me there with no effort. Perhaps I happened to be the exact size and shape the designers had in mind, but I’ll take that result.

The inflator responds best to a firm hand, and the size of the wing means that you’ll need to stay on top of adding or venting gas to control your buoyancy, but I was easily able to make a controlled buoyant ascent midwater and to hold depth comfortably, deep or shallow.

I did find that using the corrugated hose to dump gas allowed more water into the wing than I was expecting.

As for surface support, remember those tubes on the club RIB? There’s nothing to match the feeling of being supported well out of the water by a proper big wing, as I was by this one.

If you want a wing with dual bladders and high volume, you won’t regret buying the ScubaPro X-Tek Pro System Extreme.

And if 27kg of buoyancy isn’t enough, you can get yourself a 40kg wing.