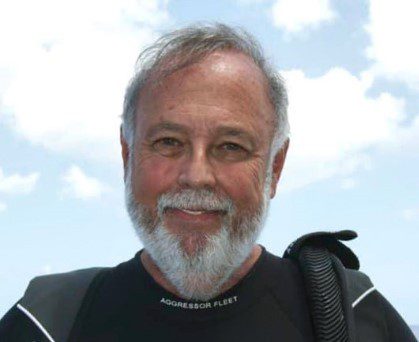 One of the best-known names in the international scuba world, US diver and liveaboard operator Wayne Hasson, has died of cancer at the age of 70.

Hasson started scuba diving in 1967 and became an instructor in 1971 and a boat captain the following year. During eight years spent as a US marine, serving in Vietnam, Japan and North Carolina, he taught some 500 fellow-marines to dive.

Hasson became owner and captain of early charter liveaboard the King Mac in North Carolina in 1976 and in 1980 relocated to the Cayman Islands to manage the Casa Bertmar Dive Resort.

In 1984 he teamed up with diver Paul Haines, who wanted to convert his oil-industry crew-boat into a dive yacht, and so became first captain of the Cayman Aggressor.

In 1988 the two re-purposed another oil-crew boat as the Belize Aggressor and started a franchise operation that would grow into the world’s biggest dive-liveaboard fleet. As co-founder, Hasson has been described as the “father of liveaboard diving”.

When Wayne Brown bought Aggressor Fleet in 2007 Hasson became a minority shareholder and president of the company, which expanded the following year when it acquired the Dancer Fleet. Today Aggressor operates 23 diving liveaboards around the world.

Hasson was an instructor-trainer for several training agencies, an SSI Platinum Pro diver with more than 10,000 dives logged, and a keen underwater photographer.

Environmental concerns led him to organise the first permanent mooring sites for dive-boats in the Cayman Islands, and he extended the concept to other parts of the world, including Belize, Turks & Caicos, Honduras, Hawaii, Palau and Chuuk.

Hasson was also recognised for his mentoring of young people and was a director of the Sea of Change and Oceans For Youth foundations. Accolades included Diving Pioneer, Legend of the Sea and Sea Hero awards and induction into the Cayman Islands’ International Scuba Diving Hall of Fame.

He met his wife Anne when he taught her to dive in the Caymans in 1981, and she worked with him to develop the Aggressor operation, continuing today as reservations, advertising & marketing vice-president. They lived with their family in Naples, Florida.