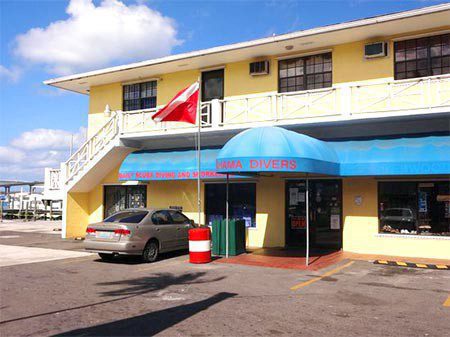 One of the Bahamas’ longest-established dive-centres has been forced to cease trading as a US $9 million compensation claim for a US diver’s death some 17 years ago has finally been enforced.

Bahama Divers, based in Nassau, New Providence, had been resisting enforcement of the Bahamas Supreme Court judgment for the past 12 years. Owner Matthew Whiteland, who took over the business started by his father in 1965, claimed that he had consistently received legal advice during that period to the effect that such a penalty could not be imposed on a business with relatively low income.

Whiteland told local publication Tribune Business that court bailiffs had arrived at Nassau Yacht Haven to seize the company’s assets the day after its July re-opening following the coronavirus lockdown.

He said that with annual gross sales below $2m even in normal circumstances, Bahama Divers’ liquidation would not come close to meeting the the full $9m award. Its bank and landlord were also claiming back debts from the company, but Whiteland said that the liquidation costs alone could exceed the company’s net worth.

Fifteen staff, many of whom were said to have been with Bahama Divers for 20 years and more, were being made redundant and there was doubt about whether they could receive full severance pay. Whiteland said that while he hoped to re-enter the dive business and re-employ some of his staff, this would be challenging in the current circumstances.

He explained that in the early 2000s a qualified scuba diver had gone out with friends on a dive to less than 8m with Bahama Divers. He had signalled that he was heading back to the boat but had failed to return and was later found dead.

The diver’s family had taken legal action in Florida and the $9m judgment had been upheld by the Supreme Court in 2008.

Whiteland argued that the timing of the seizures following the extended lockdown in which no revenue had been generated made no sense if the aim was to maximise recoveries.

“It’s a big mess, and I don’t know how they’re going to figure out all of it, who’s going to get paid and who isn’t,” he told the Tribune. “They might have seized everything, but it’s far from over for whoever has to liquidate everything and recover the money.

“My dad, who is 84, has pretty much bankrupted himself to pay the legal fees to continue the court work. The lawyers kept saying don’t worry – it’s too much money to wind you up.”