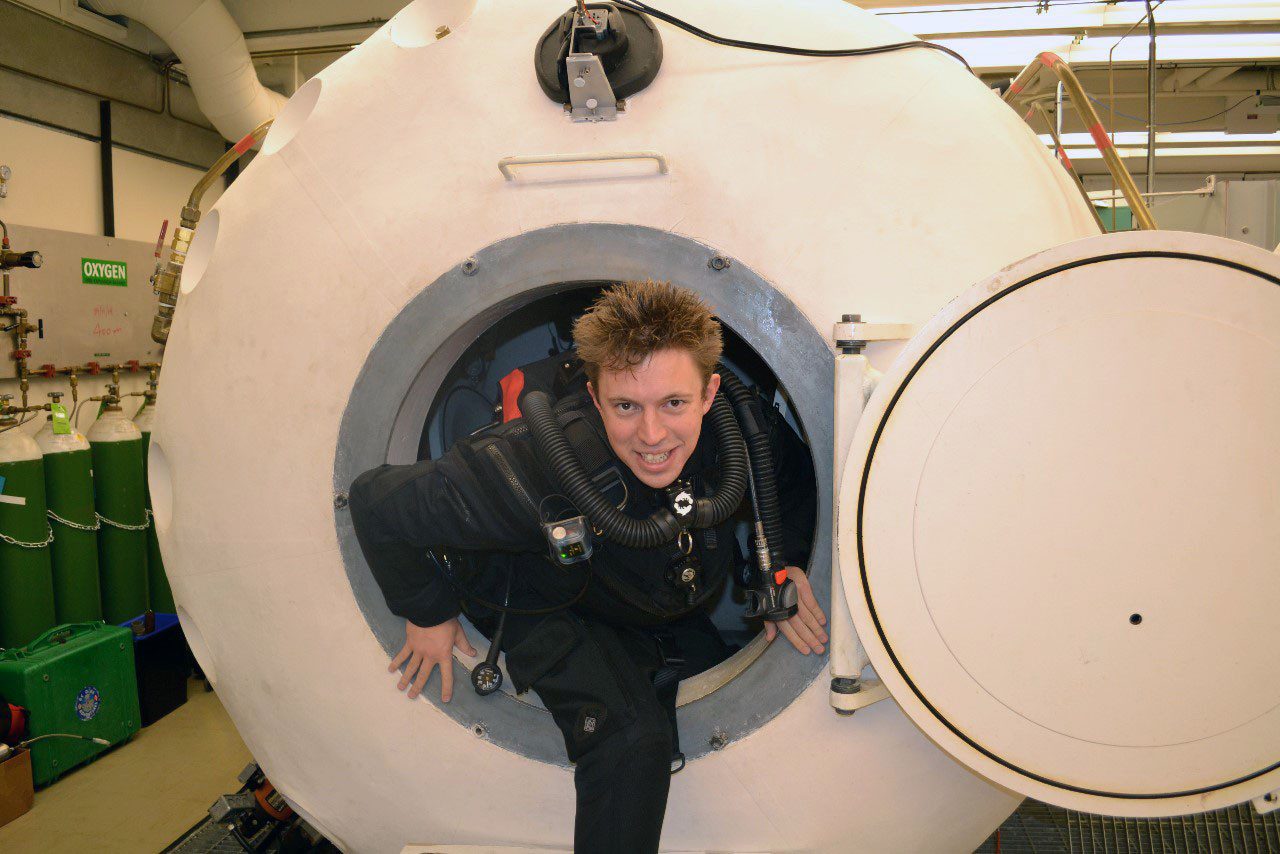 Dr Reynolds has switched his attention from CCR diving to his initiative to transform some of the thousands of commercial aircraft now grounded close to population centres by the Covid-19 pandemic into hyperbaric oxygen chambers to treat sufferers.

“At the current casualty rates, if the treatment proves effective one day’s difference in response speed could mean a difference of thousands of lives saved,” says Dr Reynolds.

At present fewer than half of Covid-19 patients placed on ventilation survive the virus. Hyperbaric oxygen therapy (HBOT), the breathing of oxygen under pressure, could prevent patients deteriorating to the level at which they require ventilation, says Dr Reynolds – but shortage of HBOT chambers has been preventing serious consideration of such treatment.

“I’m sure this idea will have occurred to lots of divers – in fact we often talked about it before the crisis became truly serious,” he told Divernet.

“If oxygen helps, why not have more oxygen? However we, like everyone else, assumed that ventilators would be enough to cope as long as we had enough of them, and didn’t give it serious thought.”

As Lungfish became involved in ventilator design to help cope with the coronavirus crisis, Dr Reynolds asked clinicians why ventilated patients had such a low survival rate, even using top-end kit.

“When we heard the answer – that they died of multiple organ failure through chronic hypoxia, despite being ventilated – we immediately considered that hyperbaric O2 might be a solution.

“We began consulting with our contacts in hyperbaric medicine as to whether it might work, and with contacts in aerospace, and other areas such as civil engineering to find a way it might be scaled up.”

Commercial airliners can be pressurised to around 1.6 times atmospheric pressure – the required level for potentially effective treatment.

“We’d imagined to start with that the treatment might be akin to the long stays at pressure used in treating decompression illness. However, it seems at this stage that the effect of HBOT in suppressing inflammation could be just as important, if not more, than overcoming the diffusion barrier of a compromised lung,” said Dr Reynolds.

Dr Reynolds maintains that aircraft used as makeshift HBOT chambers could relieve pressure on hospitals by treating large numbers of patients in a non-invasive way to prevent them requiring full intensive care. The therapy could also benefit the developing world, where fewer treatment facilities are available.

“I was feeding this idea to UK government through contacts in the civil service as soon as I was reasonably sure that both the treatment and the scale-up (aircraft) could be practical, around 10 April,” Dr Reynolds told DIVER. “I know that others have continued doing this, through different channels into the Cabinet.

“We believe that the government is aware of it but has not yet acted on it. We think this is due to the lack of a conclusive clinical trial.”

He believes there are three main reasons why clinical trials have not taken place.

Firstly, the hyperbaric industry issued guidelines against treating patients with Covid-19 for fear of unknown complications or spreading the virus. “The guidelines are absolutely not a ban on trials ‘for’ Covid-19, however they give that impression, despite the fact that expert medical opinion is quite the reverse,” says Dr Reynolds.

He also says that in the UK the hospital-based chambers best suited to clinical trials are now closed, with staff occupied in treating patients.

Overseas, “imminent” trials had been held up by finance, approval and patient-recruitment issues. “Should the technique prove effective, several thousand people will have lost their lives in the meantime,” he says.

However, the aircraft industry was taking “positive steps” to implement the plan quickly should the clinical trials prove successful.

“We have been offered both aircraft and hyperbaric chambers with which to do the trials and treatment, and at least one major airport, currently closed, has signalled willingness to help.”

A clinical trial is due to start shortly at a Canadian hospital, and Lungfish’s campaign to secure trials in the UK can be found here.