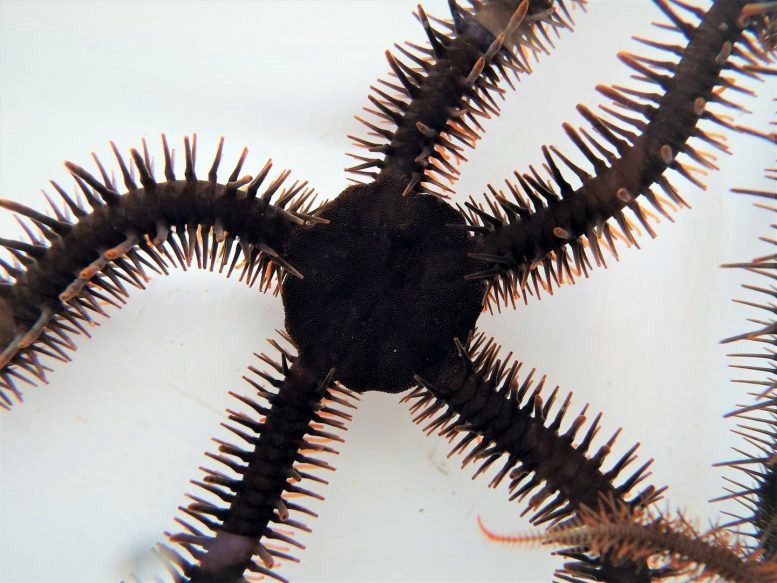 Brittlestars have no eyes but one species has been shown for the first time to be able to see – thanks to its ability to change colour from day to night. It is only the second-known example of vision in any eyeless animal.

An international team led by Lauren Sumner-Rooney of Oxford University Museum of Natural History have established that the red brittlestar Ophiocoma wendtii is able to see its way around Caribbean coral reefs.

The species, which changes colour from bright red in daytime to beige at night, was known to be covered in light-sensitive cells and to appear averse to light.

The researchers ran hundreds of behavioural experiments on the brittlestars to show that during the day their coarse form of vision allowed them to distinguish areas of light contrast. This enabled them to shift to areas they believed would provide better protection from predators.

However, the team were surprised to find that the responses vanished at night, even though the light-sensitive cells still appeared active.

They traced this to the day/night colour change. A paler brittlestar, Ophiocoma pumila, that was also covered in light sensors didn’t change colour at night, and appeared unable to see.

Using digital models of both species’ light-sensing cells, the scientists showed that during the day the pigment in O wendtii restricted light reaching the sensors to a narrow angle. Without this pigment, as in O pumila or at night in O wendtii, light could reach the sensors from a far wider angle, rendering vision impossible.

The scientists will now test whether a single species of sea-urchin – the only other animal known to see without eyes – also changes colour in response to light levels.

Also involved in the study were the Smithsonian Tropical Research Institute in Panama, Berlin’s Museum für Naturkunde, Lund University and the Georgia Institute of Technology.