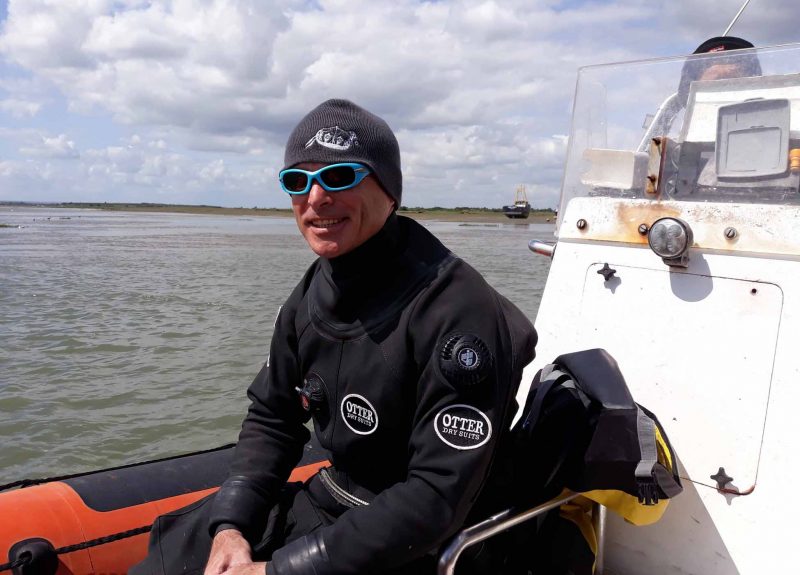 Mark Beattie-Edwards heads out to the London wreck-site. (Picture: NAS)

The Nautical Archaeology Society is set to present a series of 12 free online lunchtime talks billed as “self-educating while self-isolating”. It says it wants to “share important work being undertaken in our discipline with the wider world – and give everyone something exciting to learn about while we’re all stuck at home!”

Inspired by TEDtalks, CovEDtalks will be standalone half-hour webinar presentations on Tuesdays at 12.30pm. “We have lined up a range of speakers on topics related to underwater archaeology, maritime heritage, foreshore archaeology – anything wet and old and interesting!” says the NAS.

The first talk, on 31 March, is delivered by the society’s CEO Mark Beattie-Edwards and titled “Discovering The London”.

The historic wreck blew up in the Thames estuary in 1665. Protected in 2010 by Historic England, it is now under threat from erosion and its proximity to a shipping channel.

Two small-scale excavations have taken place but regular work is undertaken only by the small team of volunteer-divers from the London Shipwreck Trust. Beattie-Edwards will discuss their work to date, and the plans to create a facility to house and display the site for the public.

Register once here for free access to all 12 talks until the end of June – though the NAS says it hopes the series will continue beyond the suggested 12-week isolation period.

Also worth catching up with online during isolation is Greenpeace’s five-part “Ocean Witness” magazine-style documentary series, which has been reporting weekly from a pole-to-pole voyage. Presented by Sophie Duker and Simon Watt, the latest episode focuses on the Antarctic, but the whole series can be viewed here.

And back with shipwrecks, a film that divers will want to watch is the TV premiere of “Lost Ships – the Hunt for the Kaiser’s Superfleet”.

It details the recent discovery by British underwater archaeologist Mensun Bound of the wreck of German WW1 cruiser SMS Scharnhorst.

The flagship of Rear-Admiral Graf von Spee’s East Asia Squadron, the wreck was found in the South Atlantic and provided clues to its sinking, as reported in December on Divernet.

The film goes out at 8pm on 6 April on the Smithsonian Channel, but will also be shown on Channel 5 in early May.