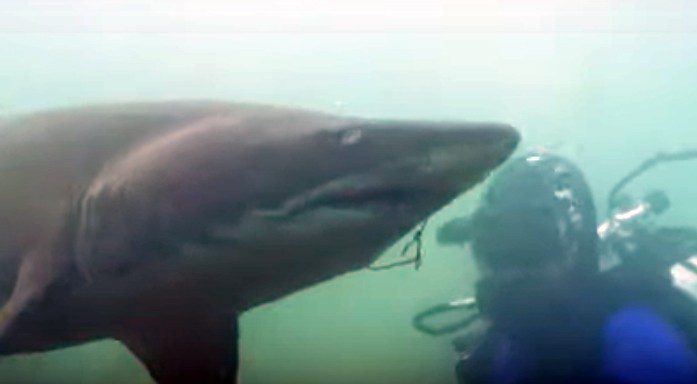 A juvenile grey nurse shark has retained full use of both eyes thanks to the action of scuba divers from the Sea Life Sydney Aquarium in Australia.

The team of five divers was dispatched to Bushrangers Bay after a member of the public reported that the shark needed help. They located the shark, a female, and an initial inspection showed that she had a “gang” or multiple-hook rig caught between her eye and jaw. If left, the hooks were likely to have caused infection or led the shark to be snagged on debris or netting, said the aquarium.

Grey nurses, known elsewhere in the world as sand-tiger or raggedtooth sharks, are classed as Critically Endangered.

The divers returned to the bay equipped with a large custom-made “sock” to enable them to handle the shark. Despite what were reported to be difficult conditions, they eventually managed to herd her into the container, and it then took the aquarium’s resident vet Dr Michael Cannon only a minute to remove the hooks.

“It is always heartbreaking to hear of animals in distress, particularly when dealing with the young female of an endangered species,” commented aquarium marine scientist Rob Townsend. “Predators such as grey nurse sharks rely heavily on their vision, so to be able to save the sight of this animal was really rewarding for all involved.

“After the rescue, we administered the shark with antibiotics and vitamins before she swam off beautifully and healthily into the ocean.”

“Gang hooks are a common tackle used by fishermen and sadly can have devastating impacts on wildlife,” said Townsend.

The aquarium wants anglers to avoid using stainless-steel tackle and to use barbless circle hooks.