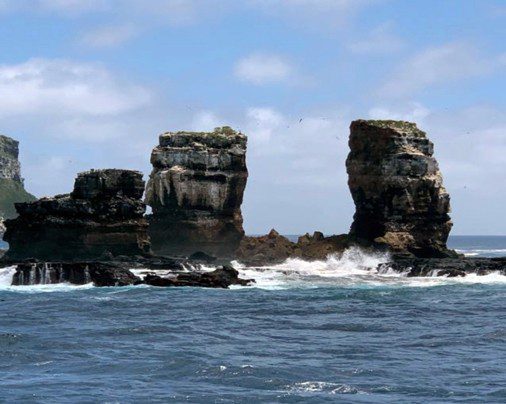 The iconic rock formation Darwin’s Arch in Galapagos, a landmark for visiting scuba divers over the years, has collapsed through natural erosion.

Ecuador’s Ministry of Environment & Water confirmed the demise of the natural structure yesterday (17 May).

The arch lay 1km south-east of uninhabited Darwin, the northernmost island in the Galapagos archipelago, and would at one time have been connected. Remote Darwin is “considered one of the best places on the planet to dive and observe schools of sharks and other species” said the Ministry.

The feature was named after Charles Darwin, who studied Galapagos wildlife from his vessel the Beagle while forming his theory of evolution. It is situated in an area of notable seismic activity, which would have stressed the structure.

Although the lintel of the arch has fallen into the sea, what were the two supporting columns remain. One side of the site includes an 18m-deep viewing platform

Diver Jason Borkland of Fins Attached Marine Research & Conservation, who was aboard the research vessel Sharkwater the day before the collapse, posted pictures of the then-intact arch, describing them as “probably the last photos of an iconic symbol”.

“Darwin’s Arch is likely the most famous dive-site in Galapagos, and is the one that guests look forward to,” write the dive-team of the Galapagos Master in the 2021 Diver World Liveaboard Guide, which is set to appear in the July issue of DIVER magazine.

“This wall-drift, surprisingly, has an average depth of only 9m. Medium to strong currents are to be expected but these bring large numbers of hammerhead, blacktip, silky and Galapagos sharks with them.

“Schools of jack are a common sight, along with turtles, angelfish and moray eels. Occasional sightings of tiger sharks, manta rays and bottlenose dolphins make for a thrilling time spent here. Whale sharks can also be seen between May and November.”