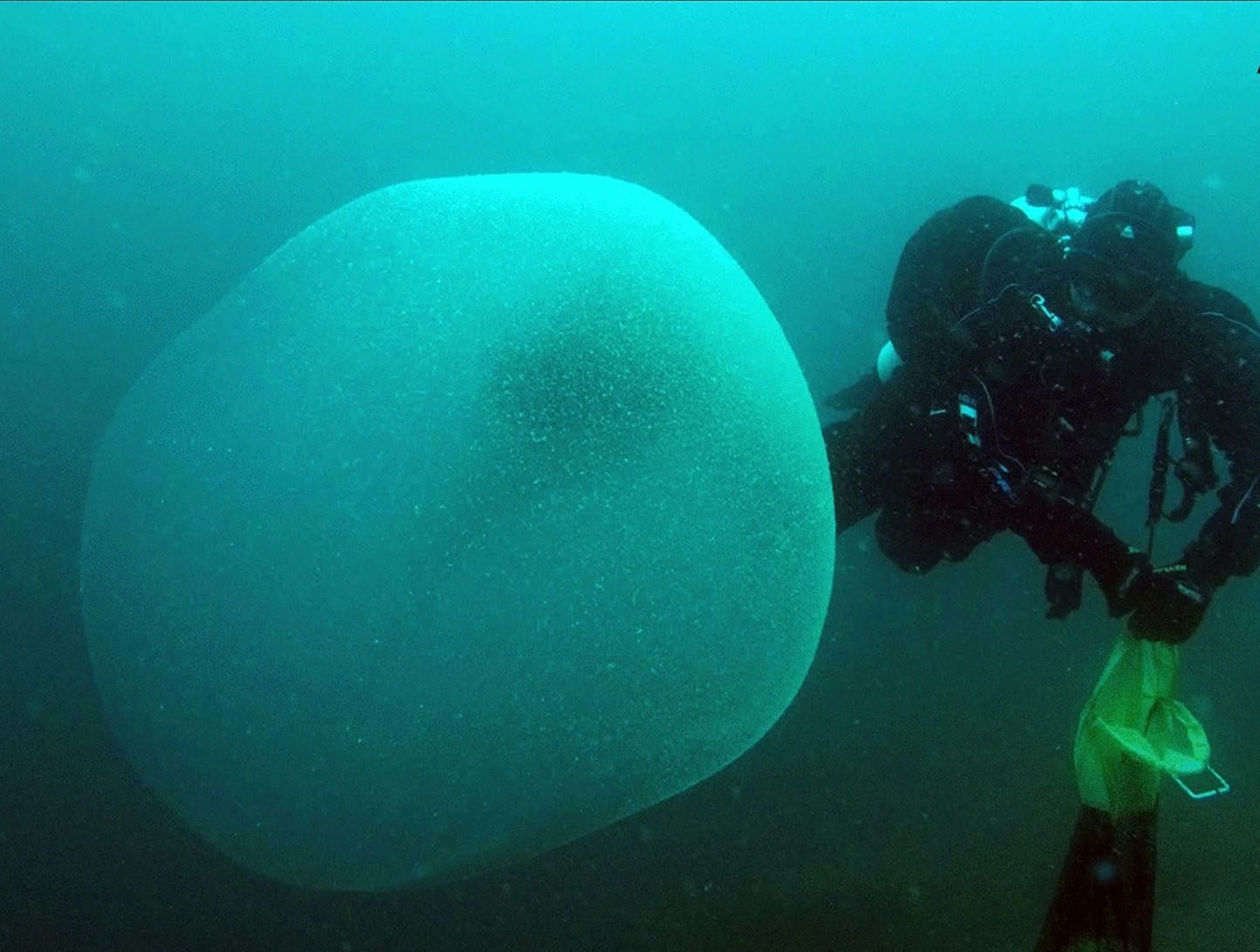 The identity of this mysterious 1m-diameter “blob”, one of a number spotted by scuba divers in north-east Atlantic waters over the past 36 years, has finally been revealed in a new study.

Ninety such gelatinous spheres had been reported, especially around Scandinavia and also in the Mediterraean, but only now have they been confirmed as containing embryos from the broadtail shortfin squid, at various stages of development and encased in a disintegrating bubble of mucus.

The sightings had been recorded from the surface to as deep as 70m, in temperatures from 8-24°C, and the spheres usually appeared neutrally buoyant, with more than half of them having a dark streak running through their centre.

For decades a lack of tissue samples hampered scientific identification. Then a citizen-science campaign was launched by the leaders of the international study, Halldis Ringvold of marine-zoology organisation Sea Snack Norway and Morag Taite of the National University of Ireland.

They put out a request on social media to dive-clubs and centres in the UK and Ireland as well as Norway, Sweden and France, Spain, Portugal, Italy, Malta, Cyprus and Croatia.

Their call was answered when in 2019 divers managed to secure small tissue samples from four such spheres off Norway. Containing eggs and mucus, the samples remained intact after being collected in bottles and kept in home refrigerators.

DNA analysis confirmed the egg masses to be those of the broadtail shortfin squid (Illex coindetii), a member of the Ommastrephidae family. It is now estimated that each sphere could contain hundreds of thousands of eggs in various stages of development.

Ommastrephids are the most abundant and widely distributed family of cephalopods, from sub-Arctic to sub-Antarctic seas. They also represent 70% of cephalopod catches by commercial fisheries.

Broadtail shortfin females are said to be “intermittent spawners”, laying eggs several times over periods of a few days and sometimes a few weeks. The female stops growing at this time and dies shortly afterwards – their natural lifespan is thought to be no more than a year.

Fertilisation takes place during spawning, and the mucus generated by the mother is thought to be intended to keep the eggs both buoyant and secure from predators.

The dark streak is thought to come from ink released as the eggs are fertilised, and to be present only if they were recently spawned. One theory is that this creates a visual illusion of a large fish, as a way of warding off predators.

Going back through previous reports of spheres matching the description of those analysed, the researchers cautiously concluded that their similarity in shape and size made it likely that many were from the same species.

Their study is published in the journal Scientific Reports.