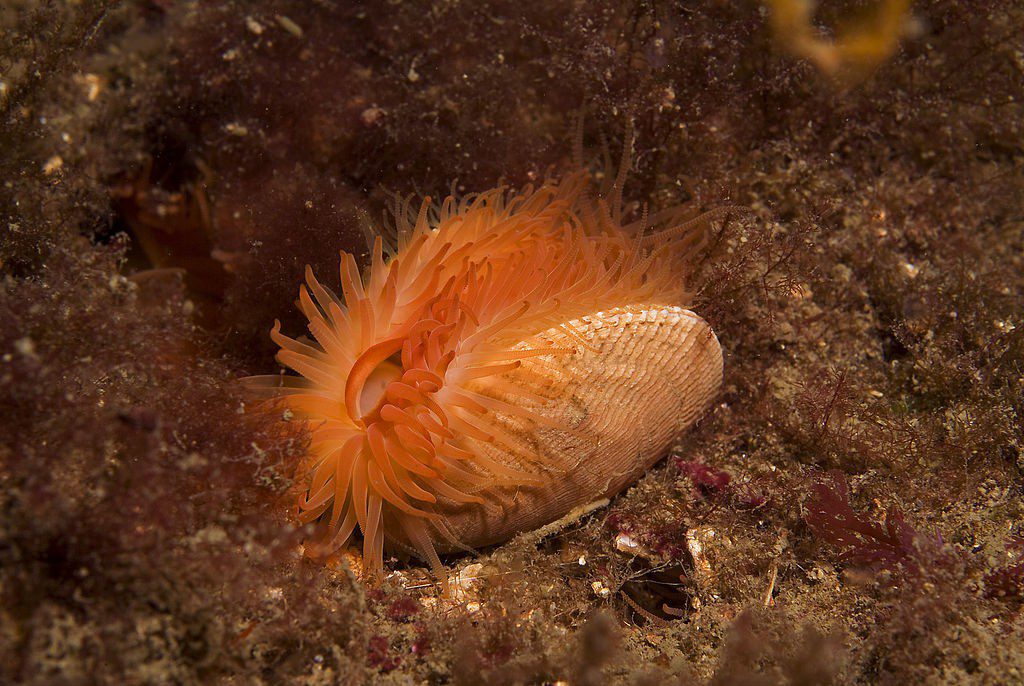 A surprising reef based on the nests of rare flameshells has been discovered by local scuba divers off the Isle of Arran in the west of Scotland.

Flameshells are small saltwater clams with orange flame-like tentacles protruding from their pair of shells.

They produce thin but strong byssus threads that “knit the seabed together to build a nest that supports a large variety of other marine life,” according to COAST (Community of Arran Seabed Trust), the conservation charity that has engaged Arran divers in its citizen-science projects.

Arran is the biggest island in the Firth of Clyde, which once supported seven large flameshell reefs, but only one of these had until now been thought to have survived as a “remnant reef”.

Over decades bottom-trawlers and scallop-dredgers were believed to have ripped up the seabed habitat beyond repair, but the newly discovered reef lies in the South Arran Marine Protected Area (MPA), which COAST pushed to be created.

The flameshell reef covers at least 10,000sq m – about the size of 30 tennis courts – says the charity, which describes the discovery as “significant and exciting” for biodiversity interests throughout Scotland.

“Living reefs like this create an important habitat and enhance biodiversity in the area,” says COAST, adding that they provide “key nursery grounds for juvenile fish and commercially important scallops” and form “vital blue carbon stores” helping to increase resilience to climate change.

The Clyde’s other remnant reef, at Otter Ferry in Loch Fyne, survived only because sub-sea electrical cables made the area too dangerous to fish, and COAST says that 265 animal species have been recorded there.

“This discovery re-ignites the possibility that, with adequate protection, the once widespread Clyde flameshell beds could one day fully recover along with wider marine and fisheries improvements,” said marine biologist Prof Jason Hall-Spencer of Plymouth University.

“I cannot commend the community on Arran highly enough for the dogged determination to recover the seas around their island and the wider Firth of Clyde.”