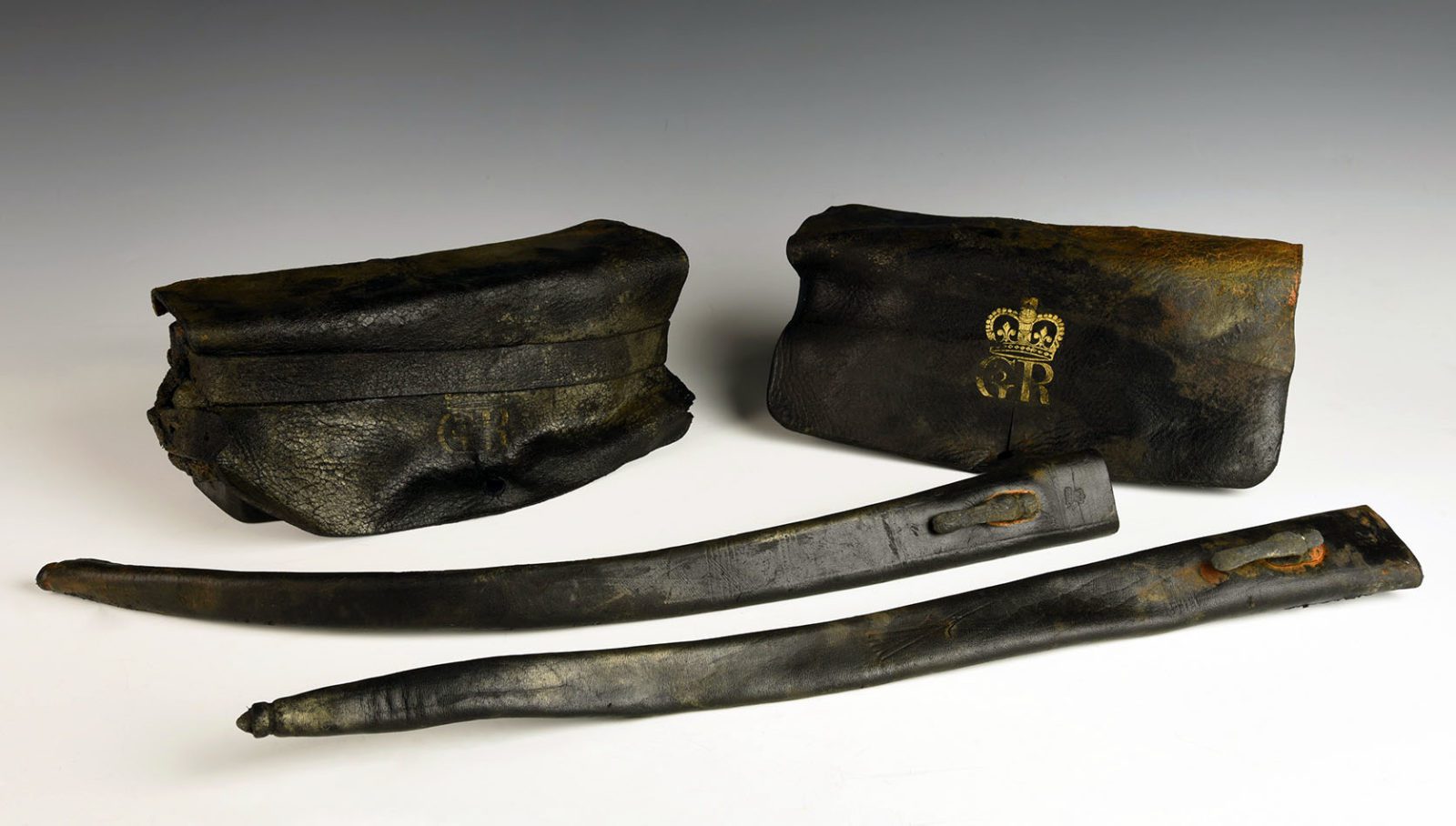 The wreck of an 18th-century British warship off the Netherlands’ North Sea coast has revealed a number of well-preserved artefacts, including cannon, leather cartridge pouches and bayonet sheaths.

The discoveries have been reported by the local archaeological organisation Archeology West-Friesland.

The fifth-rate frigate HMS Apollo had been on patrol on 6 January, 1799, when a navigational error resulted in it stranding in shallow water near an uninhabited island called Noorderhaaks. Captain Peter Halkett tried to save his vessel by jettisoning its 42 guns along with the ship’s stores, but he was unable to float it clear of the sandbank.

The 270 men aboard were rescued by a Prussian frigate, which jettisoned most of its cargo of wine to make space to carry them back to England.

The vessel sank deep into the sandy seabed, which now lies at a depth of 7m, but recently the preserved lower deck re-emerged as the result of extensive natural erosion at Noorderhaaks. “Many tens of metres per year disappear into the sea and shipwrecks that have perished there are exposed,” says Archeology West-Friesland.

“Governments and amateur divers monitor the wrecks and take measures to protect the site or – if that is not possible – the disposal of exposed objects.”

A group called North Sea Divers of Breezand was asked to investigate the wreck of HMS Apollo last summer. Alongside the divers’ excavations, sonar-scanning of the wreck-site was carried out by Periplus Archeomare on behalf of the Cultural Heritage Agency of the Netherlands.

Many of the guns thrown overboard were recovered, along with well-preserved artefacts belonging to Royal Marines on board. These included two leather cartridge pouches that would have hung from belts. Their flaps were printed with King George III’s coat-of-arms in gold.

The bags were each designed to contain 18 cartridges in wooden holders. Each cartridge was a gunpowder-filled paper roll with a lead musket-ball.

Also found on the wreck were two leather bayonet sheaths with iron clips. The sheaths were stamped with the Royal Navy’s “Broad Arrow” mark and a crowned “GR”. “There are many other objects on the wreck,” says Archeology West-Friesland.

The 45m Artois-class HMS Apollo was launched in September 1794, but it had not been fully tested in the hasty effort to reinforce the fleet against expected French attack and had faulty navigation equipment, says the organisation.

The recovered artefacts are currently being conserved. Although officially British property, it has been agreed that the province of North Holland should retain charge of them, and there are plans to exhibit them at the local Museum Kaap Skil this summer if coronavirus allows.