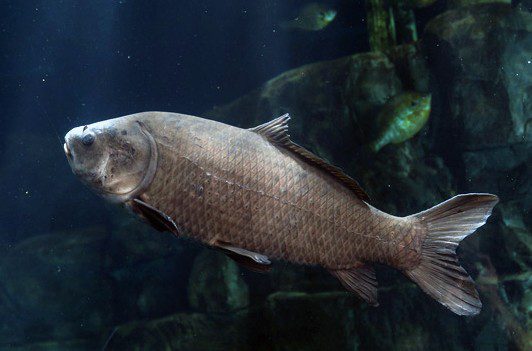 The longest-living marine vertebrates, the Greenland sharks, can survive for many centuries, but until now freshwater fish have not been known to live much beyond the age of 70.

Now a far longer-living freshwater fish has been identified, with one specimen of the North American bigmouth buffalo (Ictiobus cyprinellus) found to have made it to 112 years old. The upper age limit of the species had previously been estimated as 26.

Over a seven-year period a team of marine biologists led by Alec Lackmann of North Dakota State University caught and recorded large numbers of bigmouth buffalo, which can grow up to 1.25m long and weigh up to 36kg.

Most of the fish were tagged and released back into the wild, but nearly 400 were dissected to enable examination of their otiliths, structures in the ear that help to maintain balance in fish.

Otiliths accumulate additional layers of calcium carbonate at regular intervals so that, as with tree-rings, counting them can provide a reliable estimation of age.

The researchers found that an upper age range of 80-90 years was common in bigmouth buffalo, well beyond the previous record age of 73 years for a freshwater drum.

The finding was verified using bomb carbon dating, a method based on the mid-20th-century atomic bomb tests that temporarily doubled carbon 14 content in the atmosphere, leaving detectable traces in the otiliths.

In some of the bigmouth buffalo populations studied, more than 90% of the fish were more than 80 years old. The biologists believe that this is the result of dam-building on rivers in the 1930s restricting the fishes’ access to their natural spawning grounds, preventing them from producing young.

Predated on by anglers (not to mention biologists) and without natural replenishment of their stocks, the elderly bigmouth buffalo populations are now in decline.

The research is published in Communications Biology.