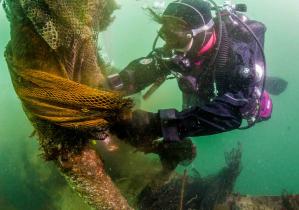 At present divers taking part in organised marine-litter retrieval and boat-users who facilitate such operations require a licence.

But a six-week consultation just launched by Environment Minister Thérèse Coffey is intended to lead to their being exempted from licensing – leaving them free to tackle the estimated 640,000 tonnes of ghost-gear abandoned annually.

“Diving communities play an important role in protecting our marine environment and tackling the litter and ghost gear that blights our oceans,” said Coffey. “We want to make it easier for divers and other sea-users to play their part, which is why we are looking at how we can cut red tape while still maintaining the highest protections for our precious marine life.”

The current rules, introduced in 2011, were intended to limit the environmental impact of activities such as construction and dredging, but caught up environmentally minded divers, especially when it came to using boats or equipment such as lifting-bags for clean-ups.

“As divers we see first-hand the damage to the marine environment done by abandoned and lost fishing gear, along with other marine litter,” commented British Sub-Aqua Club Chair Alex Warzynski. “Anything that Defra can do to make it easy for divers to clean up without fear of doing the wrong thing will help.”

The proposals will also allow harbour authorities to remove all marine litter, instead of being limited to removing only objects that present an immediate risk of obstruction or danger to navigation.

Its overall plan to tackle marine litter includes a ban on microbeads and proposed bans on sale of plastic straws, stirrers and cotton-buds, as well as a drinks bottle and can deposit-return scheme.

The litter-clearing consultation runs until 14 December – have your say in an online survey here.