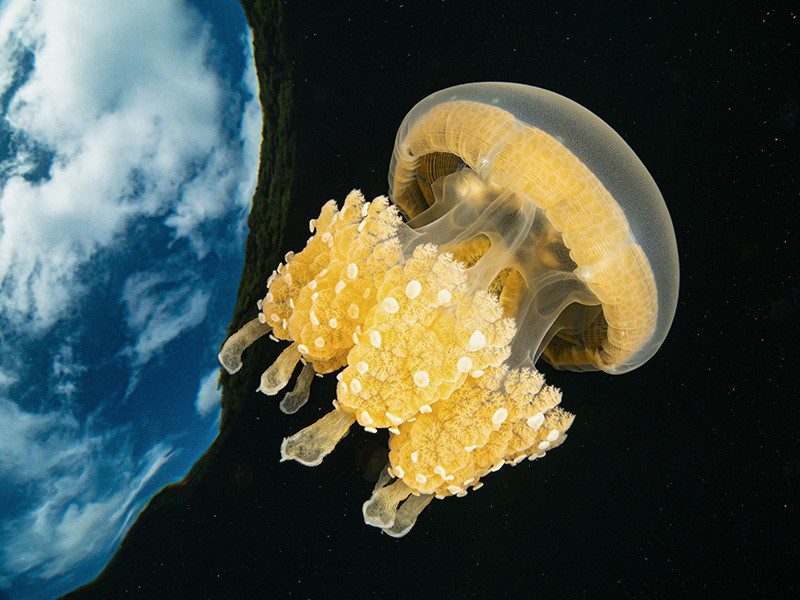 This image of a golden jellyfish was taken using a compact camera and has won German underwater photographer Enrico Somogyi the Best of Show prize in the 2020 DEEP Indonesia Underwater Photo Competition.

“A beautiful, surreal approach to a common subject,” was how Ellen Cuylaerts, one of the judging panel, summed up Somogyi’s photograph, which also took first place in the Compact Cameras category. “Looks like an outer space scene, with marine life taking time out from planet Earth, but keeping a close connection. It caught my eye and made me dream of exploration!”

The “Winners of the Winners” in the annual competition, announced today (6 April), are said to share more than US $45,000-worth of prizes of dive-packages and equipment. Somogyi, whose shot was taken not in Indonesia but Palau, won a 10-day Lembeh Strait and Bangka dive package with Critters@Lembeh and Lembeh Resort.

Like the recent Masters competition, reported in Divernet News last month, the international DEEP Indonesia contest, which is linked to a Jakarta marine and ecotourism trade show, is organised by US-based websites DivePhotoGuide (DPG) and Wetpixel. Fifteen per cent of entry proceeds are donated to marine conservation.

More of the winners’ work can be seen here.