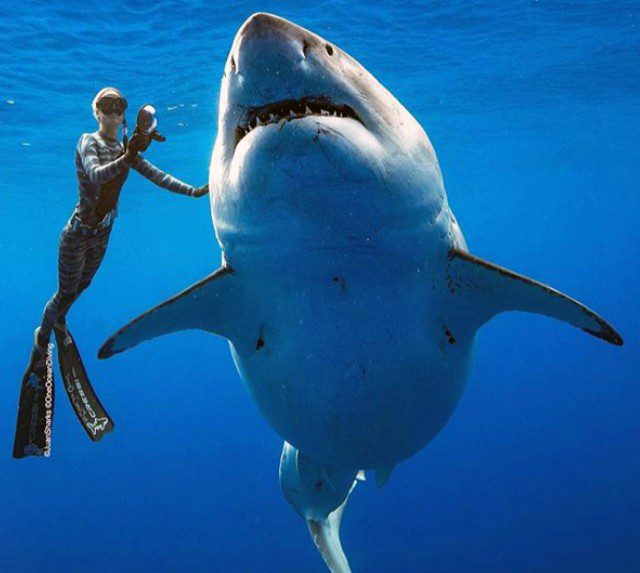 Shark freedivers in Hawaii have encountered a female great white that they believe is one of the largest ever seen.

The One Ocean Diving freediving team, which organises shark-snorkelling trips, collects data and campaigns for shark conservation, were monitoring sharks feeding on a sperm-whale carcass off the island of Oahu.

They had been observing tiger sharks feeding in the early hours of the morning when the great white showed up, and stayed throughout the day.

They reckoned the giant shark to be 6m long, making it at least 50 years old, and to weigh as much as 2.5 tonnes. The average female white shark measures less than 5m, about a metre longer than the average male.

Marine biologist and shark conservationist Ocean Ramsey, who posted images of the encounter on Instagram, believes that the shark could be one she had previously encountered off Guadalupe island in Mexico, dubbed Deep Blue. She says that older females are the safest great whites to encounter in open water as their behaviour is more predictable.

Great whites are rarely seen in the relatively warm waters around Hawaii, but Ramsey believes that the giant is likely to be pregnant and forced to venture further afield than usual in search of sustenance.

The Hawaii Department of Land & Natural Resources has warned other divers or swimmers to stay away from the area in case of accidents while sharks are feeding on the whale carcass. It is investigating reports of a man from a boat caught on video standing on the dead whale.

For Ramsey, the giant shark sighting is significant: “I’ve been trying to get the bill reintroduced in Hawaii to ban the purposeful killing of sharks and rays, and this just feels like the biggest sign to keep pushing forward for more protection for them,” she says.