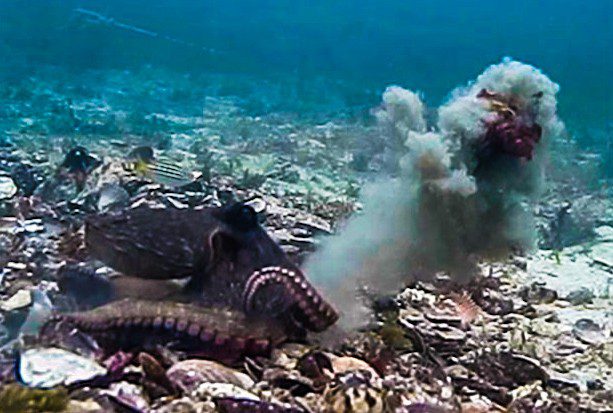 Wild octopuses in eastern Australia have been seen engaged in an activity unusual among animals – hurling shells, silt and algae at other individuals of the same species in what appear to be targeted attacks.

A scientific team led by Prof Peter Godfrey-Smith of the University of Sydney believe that the behaviour is most often used as a warning signal from female octopuses to aroused males that their sexual attentions are not wanted.

Their study was based on 21 hours of video captured between 2011 and 2018 at an 8sq m site populated by an unusually high number of common Sydney octopuses (Octopus tetricus).

The molluscs are able to collect and propel materials using their arms, at the same time emitting a powerful jet of water from the siphon held under their arm-web to boost its momentum.

The most vigorous throws – those most likely to connect with the targeted octopus – usually involved silt, and were accompanied by uniform or dark body patterns that signalled aggressive behaviour.

Sometimes the octopus would also angle its body to get more power into its shot, and was capable of achieving distances of several body lengths.

Of 101 throws observed in one year, females were responsible for 90, with two intimidating individuals responsible for two-thirds. On one occasion a female was seen to hurl silt at a persistent male five times in a row.

The males would either try to dodge the projectiles or ward them off with their arms, though they succeeded only about half the time. They might also throw materials themselves in what seemed to be a sign of frustration, though never towards the female.

Targeted throwing of objects is uncommon behaviour in animals, say the researchers.

Where it is employed among creatures such as primates, elephants or birds, it is usually against prey, to release inaccessible food or to ward off threats from other species but it is rarely directed against animals of the same species, except among chimpanzees.

The study, which has yet to be peer-reviewed, has been published by bioRxiv.