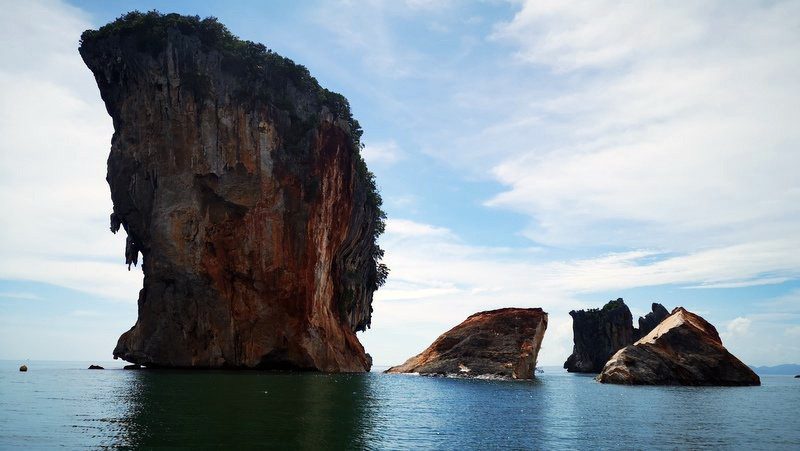 A coral reef in the Andaman Sea in southern Thailand that was damaged by a massive rockfall a fortnight ago has been closed off to scuba divers for at least two years.

Koh Mae Urai in Phang Nga Bay, between Phi Phi island and the Krabi mainland, had been a popular dive-site, but part of the towering island sheared off and fell into the sea during the night of 15 October in stormy conditions. The collapse deposited an estimated 30-50,000 tonnes of limestone rock onto the reef.

A Phi Phi National Park patrol reported the collapse the next day. The fallen rock had itself broken in half, with the two detached sections resting on the 16m-deep reef and protruding above the surface.

The two sections were each reckoned to measure about 50 by 70m when divers from the national park and the Ministry of Natural Resources & Environment inspected the area yesterday (27 October), according to local press.

Hampered by poor visibility on the two dives, they reported that some 300sq m, or a fifth of the reef, had been damaged, affecting among others staghorn, star, ring, floral and brain corals.

Heavy rainfall in the preceding two months might have contributed to the rockfall, officials believe. They said that closure of the reef was for the safety of tourists and local fishermen, because it was feared that further collapses could occur. The area has been cordoned off to boat-operators, and patrols were to be carried out.

The Koh Mae Urai dive-site is described as a group of soft-coral-covered pinnacles of similar height surrounding the main island, and is noted for its swimthroughs and seahorses living in yellow seafans.

A project to restore the reef was due to begin next week.