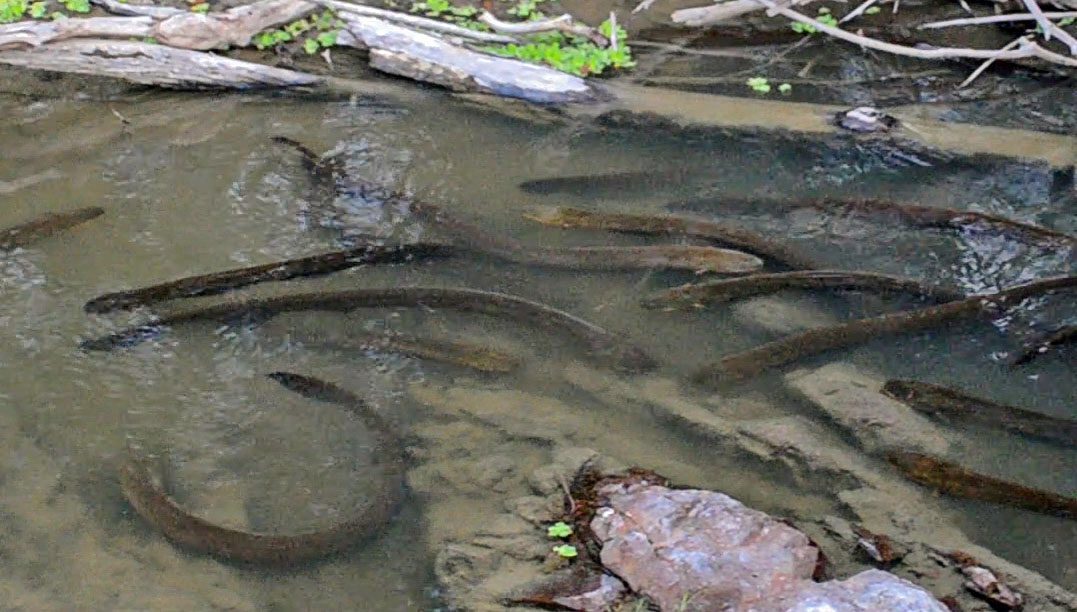 Electric eels have always been thought to be solitary night-hunters, but now they have been observed for the first time working together in large groups to kill prey. Individual eels of the new species being studied are able to emit more electricity than any other known creature – enough to power 10 light-bulbs.

Volta’s electric eels (Electrophoris voltai) are not true eels but a type of knifefish, and can grow up to 2.5m long. The rare co-operative hunting group, many of them more than 1.2m long, were found living together in a small river-fed lake in Brazil’s Amazon basin.

A scientific team has run a series of expeditions over nine years to study the phenomenon, led by C David de Santana, fish research associate of the Smithsonian’s National Museum of Natural History in the USA.

The lake was found to contain more than 100 adult Volta’s electric eels. For most of the day and night they would lie motionless in the deepest (3.5m) part of the lake, surfacing occasionally to breathe.

At dusk and dawn, however, they would hunt for about an hour at a time, corralling 2-5cm tetra fish into tightly packed balls in water less than 1m deep.

From time to time groups of up to 10 eels would split from the others and, surrounding the baitball, launch simultaneous electric attacks. The shocks would send the tetras flying out of the water before landing stunned for the eels to consume. Each hunt would include 5-7 of these attacks.

“This is an extraordinary discovery,” said de Santana, senior author of a study into the behaviour just published in the journal Ecology and Evolution.

“Nothing like this has ever been documented in electric eels. Hunting in groups is pretty common among mammals, but it’s actually quite rare in fishes.” Only nine other fish species are known to co-operate in any comparable way when hunting.

The Volta’s 860V shocks are the strongest electric discharge measured in any animal, and 210V higher than any previously recorded.

“If 10 of them discharged at the same time, they could be producing up to 8600V of electricity,” said de Santana. “That’s around the same voltage needed to power 100 light-bulbs.” The shock lasts only about 1/2000th sec but would be enough to fell a human.

“This is the only location where this behaviour has been observed, but right now we think the eels probably show up every year,” said de Santana.

“Our initial hypothesis is that this is a relatively rare event that occurs only in places with lots of prey and enough shelter for large numbers of adult eels.” Normally electric eels feed alone at night by zapping sleeping fish.

The team have now launched a citizen-scientist programme in Brazil in the hope that users will report further examples of the behaviour.

They are also planning another expedition to collect tissue samples, measure voltages and radio-tag individual eels, hoping to determine whether they use low-voltage shocks to communicate with each other – similarly to how whales and dolphins use sound to co-operate when hunting.