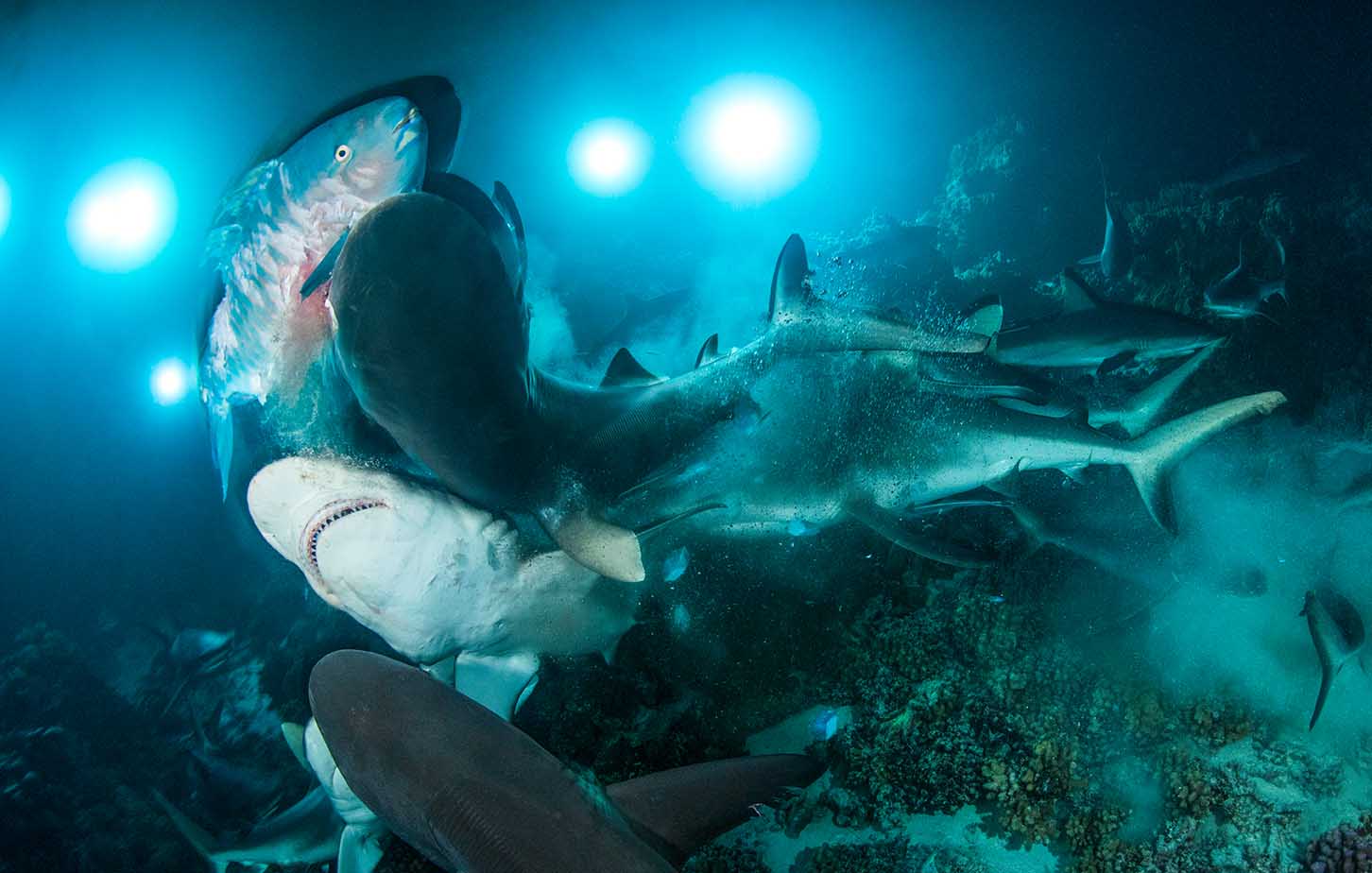 An image capturing the exact moment a pack of grey reef sharks catch and devour a parrotfish has seen British photographer Richard Barnden named Underwater Photographer of the Year 2019. His exciting picture triumphed over 5000 others, entered by divers from 65 countries.

“The Gauntlet” was taken late at night at Fakarava South Pass in French Polynesia.

“As I descended, hundreds of sharks covered the bottom,” said Barnden. “This unlucky parrotfish flinched, and that tiny movement alerted the swarm of sharks.

“The mayhem hurtled straight towards me and I instinctively pressed the shutter. Moments later, all that remained was a rain of parrotfish scales in the darkness, and this photo on my camera.” Barnden, 40, is originally from Brighton but now lives on Palau in Micronesia.

“Photography is about preserving moments, and what an unforgettable instant this is,” commented chair of the judging panel Alex Mustard, who writes the monthly Be The Champ! column about how to win photo competitions in DIVER magazine.

“Using a wide-angle lens, the photographer takes us into the full drama of the hunt, as a melee of grey reef sharks rise like a breaking wave to tear apart their prey, truly revealing the ocean’s wilder side.”

The image, which won the Behaviour category of the competition, was taken using a Nikon D810 with 15mm Sigma lens in a Nauticam housing, Inon Z240 strobes and Dive Pro/Big Blue video lights, 1/8th @ f/8, ISO 1000.

Spanish photographer Eduardo Acevedo from Tenerife was named Marine Conservation Photographer of the Year 2019 for a photo showing a loggerhead turtle entangled in a discarded plastic fishing-net.

“The turtles come to the Canary Islands by crossing the Atlantic Ocean from the Caribbean and have to avoid many man-made dangers, like plastics, ropes and fishing-nets.” he said. “This individual was one of the lucky ones because we were able to free it and recover the net.”

Underwater Photographer of the Year is an annual competition, based in the UK, that seeks to celebrate photography beneath the surface of the ocean, lakes and even swimming pools.

British photographer Phil Smith was the first Underwater Photographer of the Year back in 1965, when the competition was started by DIVER magazine founder Bernard Eaton, and following a long hiatus the event was revived in 2014/15.

Today’s competition has 13 categories, testing photographers with themes such as Macro, Wide Angle, Behaviour and Wreck photography, as well as four categories for photos taken specifically in British waters. The judges alongside Mustard were experienced underwater photographers Peter Rowlands and Martin Edge.

You can find the full results of the competition here.