Sharks at home in the forest

Sharks at home in the forest 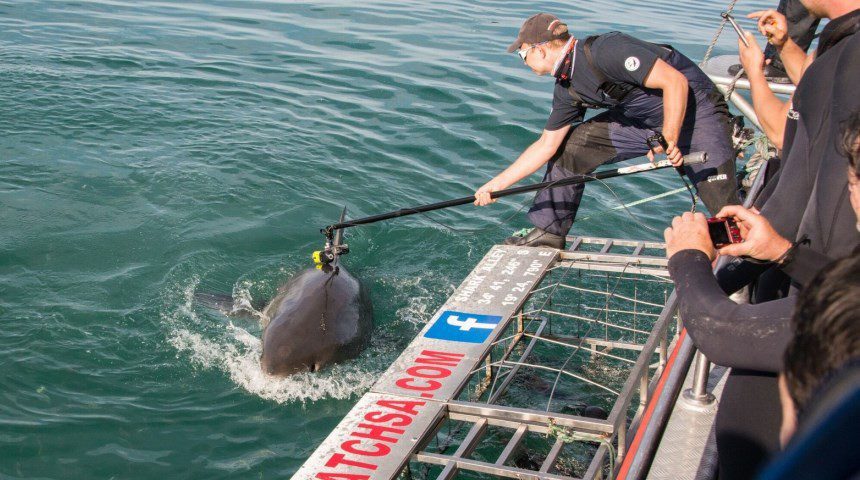 Great white sharks were always thought to lurk at the edges of kelp forests in hopes of ambushing emerging seals, rather than venturing their bulk inside the dense vegetation.

But now it seems that the seals have no hiding place. Cameras attached to sharks’ dorsal fins have revealed for the first time just how well equipped they are to navigate through tight channels or barge through the forest fronds when on the hunt.

Eight sharks were tagged in the Dyer Island Marine Reserve in South Africa by a collaborative team of scientists from Stanford University and Monterey Bay Aquarium in California and Murdoch University of Western Australia.

Chum and seal decoys were used to bring the sharks within tagging-rod’s distance of the boat to attach the camera and motion sensors.

“At times we would have to spend many hours at sea, perched over the side of a boat to deploy these tags, with no guarantees to even see a shark – but the incredible data made it all worthwhile,” said expedition leader Dr Taylor Chapple of Stanford.

“Not only can sharks be tricky to find, attaching the clamps to animals that manoeuvre through kelp proved equally challenging, as the kelp often dislodged the valuable instrument.”

Team-member Oliver Jewell from Murdoch said that the sharks were “able to make some pretty spectacular 180 degree turns in the kelp forest. In the past we would have to guess – we would track sharks to the edge of the kelp forest but then lose the signal.”

The 28 hours of footage also revealed Cape fur seals in the kelp displaying evasion techniques such as blowing bubbles if a shark was present, but no kills were recorded.

It has yet to be established whether sharks patrolling kelp forests off California and South Australia behave in the same way as those off South Africa.

Dr Salvador Jorgensen of Monterey Bay Aquarium said that some of the camera tags used were test models depth-rated to 1500m.

“In the future we hope these cameras will be used to study the sharks’ mysterious behaviour in the open ocean, where they dive repeatedly to great depths,” he said.

The research is published in Biology Letters.