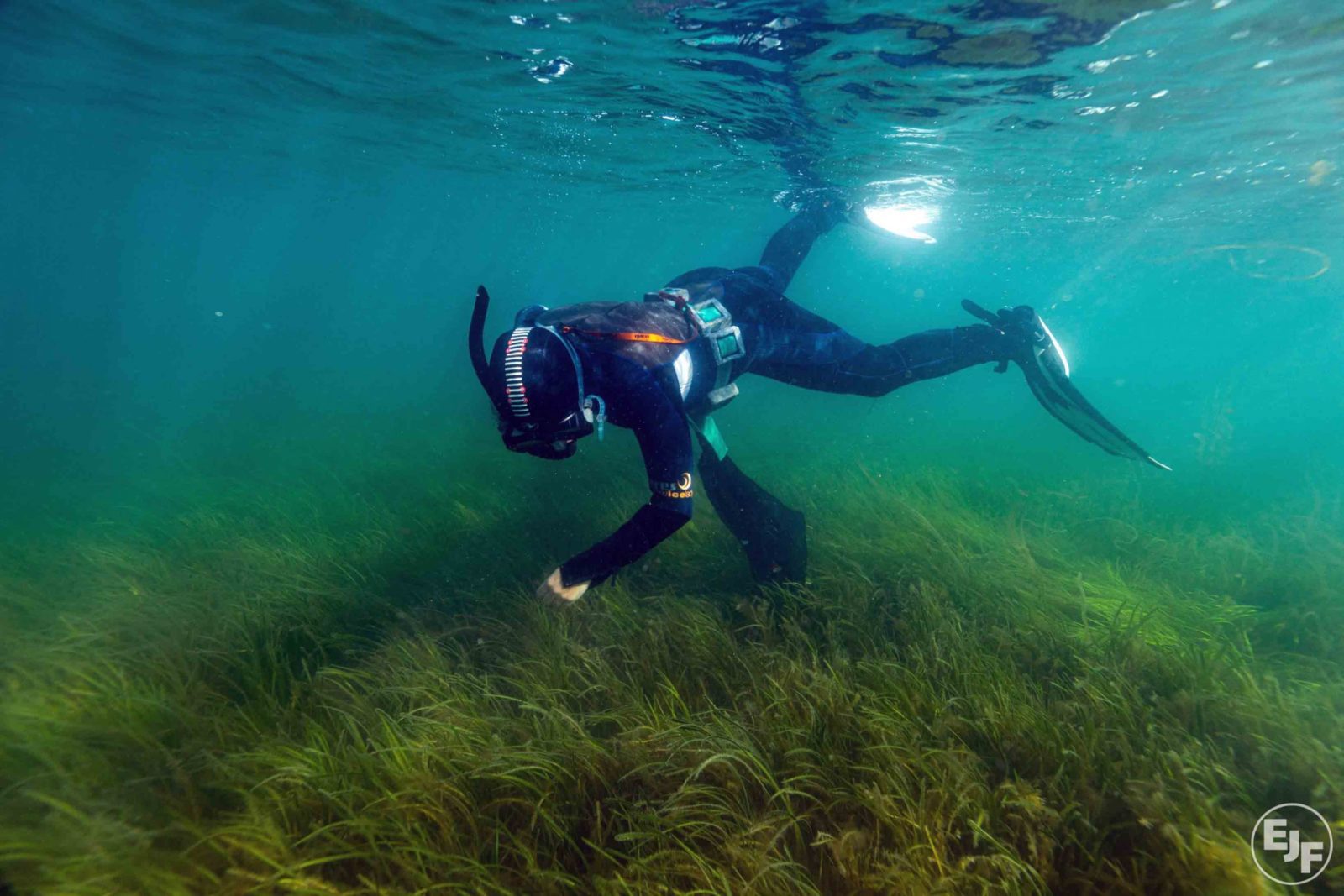 Diver over seagrass in north Wales.

More than 3000 scientists, politicians and public figures have so far added their names to a call to world leaders for international climate policy to include protection and restoration of ocean and coastal ecosystems.

The open letter, led by the Environmental Justice Foundation (EJF) and supported by 66 partner NGOs, is to be presented to governments around the world in September ahead of the COP26 climate talks in Glasgow. Scuba divers are asked to join others in adding their signatures.

Protecting the “blue carbon” contained in thriving ocean ecosystems is key to tackling climate issues, says the letter. The oceans contain around 49 times more carbon than is in the atmosphere, and more than half of biological carbon is captured by marine wildlife.

This presents a major risk if left unprotected, as it is now. Annual loss of seagrass is estimated to release around 299 million tonnes of carbon every year, rising to 450 million tonnes for coastal wetlands. The UK has lost 92% of its seagrass meadows to pollution, dredging, bottom trawling and coastal development, as reported on Divernet earlier this month.

The letter makes three demands on national leaders: to set specific legally binding targets to protect and restore blue carbon environments; to commit to the 30×30 ocean protection plan, which would designate 30% of the ocean as ecologically representative marine protected areas by 2030; and to agree an international moratorium on deep-sea mining.

Restoration and protection of marine habitats has to take place alongside ambitious decarbonisation across all sectors, says the letter.

“The ocean gives us every second breath we take, and absorbs around a third of the CO2 we pump out,” says EJF executive director Steve Trent.

“Nature-based solutions like restoration and protection of marine habitats will both help us meet global decarbonisation goals and prevent the worst impacts of global heating, while also protecting the lives and livelihoods of the 3 billion people who depend on marine biodiversity around the world.

“Our political leaders must recognise the urgency of the climate crisis and take truly bold, transformative action to reach a global zero carbon economy.”

Blue carbon is in every part of the marine ecosystem, says the EJF, from the coasts, where mangrove forests store up to four times more carbon per hectare than tropical rainforests and seagrass meadows store nearly 20 gigatonnes of carbon worldwide, to the open sea, where the great whales sequester huge amounts of carbon each year.

“Marine ecosystems must be moved to the heart of international climate policy now,” says UK Green MP Caroline Lucas. “We need policies and action that reflect their importance to both people and planet and give them the protection they deserve. Most importantly, this must be additional to – and not instead of – decarbonisation on land.”

The open letter can be read and signed here.