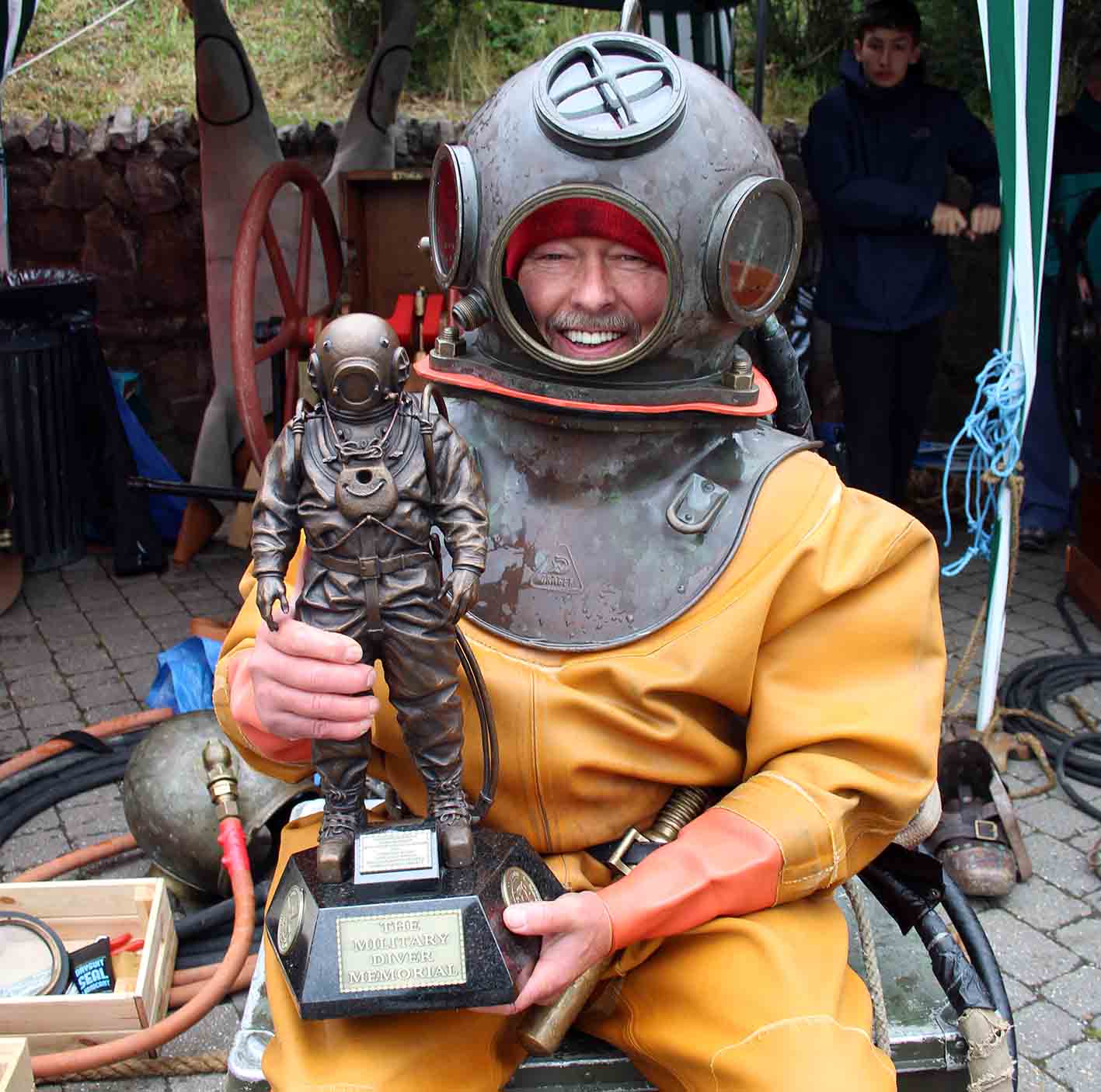 Paul Guiver with one of the statuettes. (Picture: RNCDA)

Divers are being asked to help support a campaign to fund a memorial to British military mine-clearance divers. “These are often unsung and unseen heroes who undergo some of the most arduous military training there is,” say Paul Guiver and Tony Sexton, who came up with the initiative. “On average just 40% make it through the course.”

The two former clearance divers are members of the Royal Navy Clearance Divers Association (RNCDA) which, with the British Army Divers Association, is behind the project to recognise the work of military divers past, present and future.

They plan to erect a 3m-high bronze statue of a diver wearing an Admiralty Pattern Siebe Gorman Standard dress six-bolt helmet in the grounds of the National Memorial Arboretum in Alrewas, Staffordshire – and to pay for this by selling 300 miniature bronze versions of the memorial.

The two world wars saw the biggest period of maritime mining in history, and clearance divers have worked ever since to combat the continuing threat, say Guiver and Sexton.

“It’s estimated that more than half a million sea mines were laid during WW2 alone. Add to that the amount of unexploded munitions which ended up in the sea, and there are millions of dangerous items that shouldn’t be there.”

The first men ashore on D-Day in 1944 were frogmen tasked with clearing away underwater obstructions and mines, so that Allied assault craft could land troops on the beach. RN and British Army clearance divers have been involved in every major British conflict since their inception, most recently seeing action in Iraq, Afghanistan and Libya.

Units operate permanently in the Middle East and have provided an Underwater Force Protection element since 2001. They are responsible for demolition and clearance of obstructions, search and recovery of critical equipment, inspection and classification of bridges and piers, port infrastructure repair and maintenance and mobility support to land operations.

To fund the proposed memorial, the RNCDA commissioned sculptor Greg Polutanovich to create a 54cm clay version from which to produce a strictly limited edition of 300 individually numbered bronze statuettes. More than 120 of these were sold in advance, each one priced at £2995.

Each 21kg statuette comes on a black granite base with an individually numbered commemorative coin and a piece of the ceramic mould, broken up after the statuettes have been cast. The buyer’s name will also be engraved on a plaque mounted on the base of the full-size Military Diver Memorial when it is unveiled in 2021.

Owners will be invited with a guest to attend the unveiling of the memorial and a celebratory banquet. Find out more here