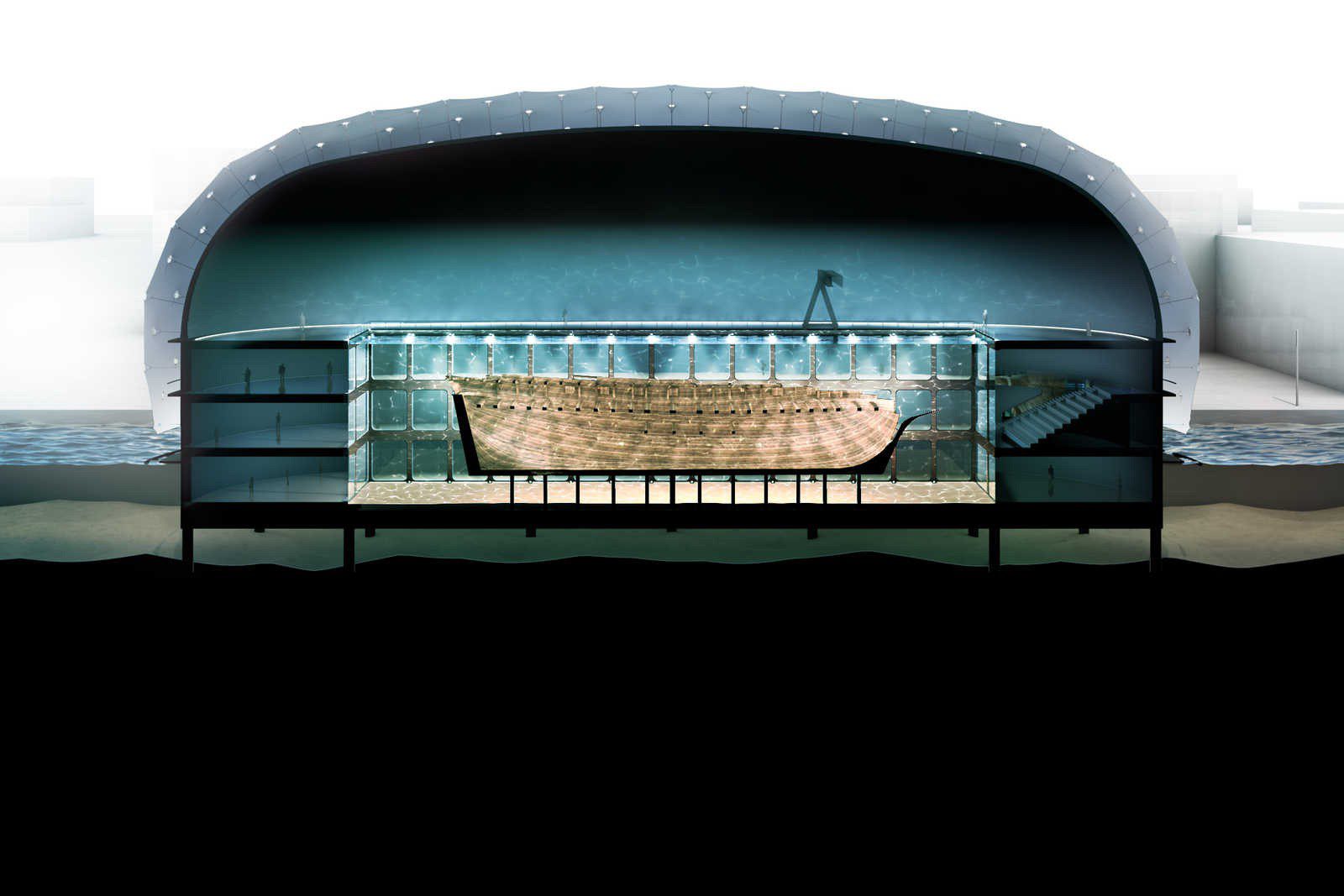 Cutaway view of the Docking the Amsterdam museum. (Picture: ZLA)

An ambitious underwater museum called Docking the Amsterdam is to be built in the Netherlands to house the wreck of the historic shipwreck that now lies in the bay of Bulverhythe near Hastings.

The 40m-long wreck is reckoned to be the best-preserved Dutch East India Company ship ever discovered. It was returning from Batavia (now Jakarta) with a mixed cargo on its maiden voyage on 26 January, 1749, when it lost its rudder in a Channel storm and was wrecked on the Sussex coast.

The ship’s 335 crew and troops escaped unhurt and some contents including chests of silver coins were salvaged. Lying in an area with a wide tidal range and strong currents the Amsterdam’s superstructure was subsequently destroyed, while its hull and remaining contents sank 8m into the sand and clay to remain largely intact.

The wreck was rediscovered in 1969 when its ribs were exposed by a low spring tide, and some excavation work was carried out by scuba divers in the mid-1980s. Some of their finds can be seen at the Shipwreck Museum in Hastings. Designated a Protected Wreck since 1974, the Amsterdam is managed by Historic England.

The new museum, to be built in the city that gave the ship its name, has been commissioned from architectural studio ZLA by the VOC Ship Amsterdam Foundation, which has unveiled the plans to relocate the wreck while keeping it preserved under water.

The Amsterdam will be lifted from the seabed in one piece using a huge steel “salvage dock” or basin, retaining as much sediment and water around it as possible. The dock will then be sailed to a site in Amsterdam where the ship can be kept in a glass tank, surrounded by a fabric canopy that appears to be modelled on a sea-urchin shell.

Visitors will enjoy 3D views, including from an overhead walkway, and be able to watch as maritime archaeologists investigate the wreck in their secure environment.

Surrounding galleries will contain recovered artefacts and are promised to highlight the story of the Dutch East India Company, including its involvement in slavery. Laboratories and training spaces for the archaeologists will be included but hidden from public view.

The project is expected to be completed by 2025.