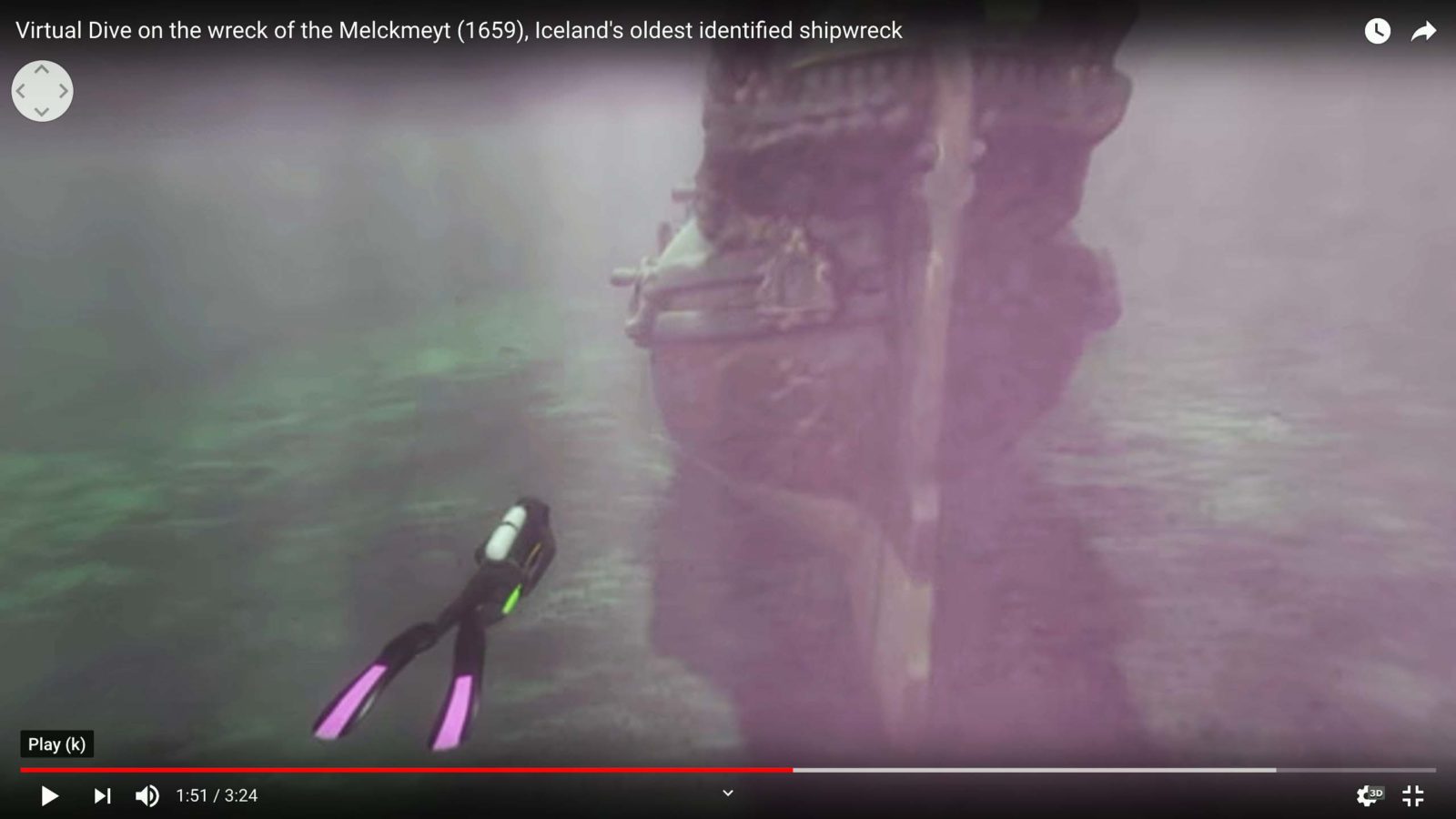 To mark the 360th anniversary of Iceland’s oldest identified shipwreck, an Australian digital archaeology specialist has collaborated with maritime archaeologists in Iceland to produce a 360° virtual dive-tour that includes a recreation of the ship.

The 33m Dutch merchant vessel Melckmeyt (Milkmaid) was originally built as a type of whaling ship known as a flute. It was wrecked while carrying a full cargo of fish during an illicit trading mission on 16 October, 1659.

The wreck was discovered near remote Flatey Island off western Iceland by local scuba divers in 1992. Its lower hull was found to have been unusually well-preserved by the cold North Atlantic waters.

The 204-second virtual dive, based on a 3D survey of the site carried out by divers, includes a realistic swim over the wreck followed by a digital reconstruction of how the upright ship might have appeared to a diver on the seabed shortly after sinking.

Melckmeyt was part of a fleet of unlicensed ships sent by Dutch merchants to trade illegally with the Icelandic population for fish and other goods under a false Danish flag. It was caught in a remote harbour by a sudden storm during which one crewman died. The survivors had to shelter in the wreck’s highest point for two days.

In 2016 Kevin Martin of the University of Iceland began a detailed high-resolution 3D survey of the Melckmeyt with a dive-team that included archaeologists from the Netherlands’ Cultural Heritage Agency.

John McCarthy, a maritime archaeologist at Flinders University in Australia, was later funded by the Netherlands to create the virtual dive, based on Martin’s survey and a scanned model of the original ship.

“We have even based the stern painting on a real contemporary Dutch painting, Vermeer’s famous Milkmaid, painted just one year before the ship was wrecked,” says McCarthy.

“As it is one of the oldest-known historic wrecks in this part of the world, it shines a light on a fascinating period of Icelandic history, when Denmark ruled the island and had a monopoly over trade here for a period of 200 years,” says Martin.

“We have also been able to directly embed a 3D survey of the seabed with full photographic texture. In theory, a member of the public viewing this might even spot something on the wreck that we have missed during our dives on it!”

Originally created for an exhibition now at the Reykjavik Maritime Museum, the 360° dive-tour can also now be viewed online.