a salute to… HMS otranto

A salute to… HMS Otranto

More than two million US service personnel were successfully transported across the Atlantic to England and France during World War One, and for the USA the sinking of HMS Otranto was the worst troop-transport disaster of that conflict. PETER KENDRICK reports on the recent Otranto 100 expedition to the wreck, which lies off Scotland near Islay 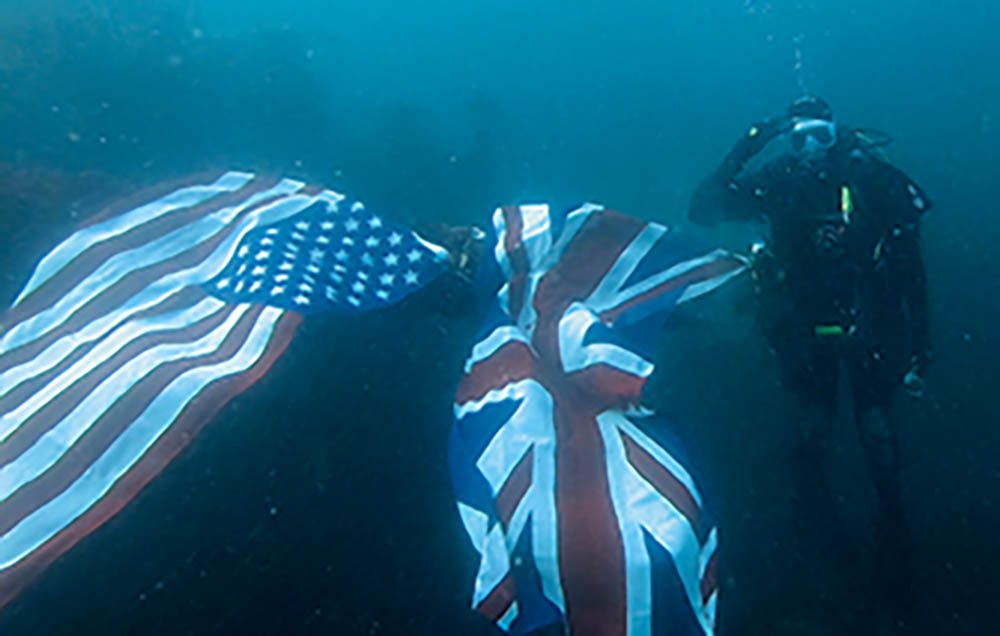 Flags of Great Britain and the USA were hoisted on the barrel of a 6in quick-firing gun on the Otranto.

THE PLAN FOR EXPEDITION OTRANTO was conceived by nine members of St Helens Underwater Group (SHUG) members a year ago. Six days’ diving off Islay, southernmost of Scotland’s Inner Hebrides, were planned for this June, giving each diver the chance to remember and honour casualties and survivors of the sinking of HMS Otranto, on 6 October, 1918.

A century on, the idea was to fly British and American flags from the barrel of the forward gun throughout the week, to survey the wreck and to video it for the first time. We called ourselves Badlads Diving, because with our accumulated age of 459 the mainly male senior members of SHUG were all Basic Air Divers!

Several of our number had been diving Islay wrecks including Otranto since the early 1980s. In those days the Port Charlotte Hotel had offered bunkhouse accommodation and air-fills, and Islay Dive Centre had also offered full-board accommodation ,and a RIB.

When these businesses had closed in the 1990s, diving from Islay became possible only for self-sufficient divers.

This time round we secured accommodation in Ju at Port Charlotte, and booked a ferry crossing from Kennacraig to Port Askaig with Caledonia Macbrayne. We took two 5.4m club RIBs towed by 4x4s and a long-wheelbase van for the gear, including two portable petrol compressors and everything else we would need for an intensive week’s diving.

The passenger liner Otranto was built in 1908 to sail between Britain and Australia, but at the outbreak of WW1 the Royal Navy requisitioned her and converted her into an armed merchant cruiser.

Used mainly to hunt German commerce raiders, she played a part in the Battle of Coronel in November 1914. In early 1918 she became a troopship.

On 25 September she left New York as flagship for Convoy HX-50, carrying US troops to Europe.

But storms were whipping up in the Atlantic during the crossing, and were eventually reported as Force 11, with mountainous seas. With accurate navigation impossible, the convoy could proceed only by dead reckoning.

A rocky coastline faced the convoy 3-4 miles to the east when morning broke on 6 October. Most of the crews thought, correctly, that this was the Scottish coast, and turned south, but Otranto’s officer of the watch read it as the northern Irish coast – and turned north.

This placed her on collision course with HMS Kashmir, another liner turned troopship, about a half mile north. Attempts by the vessels to avoid collision cancelled each other out, and Kashmir rammed Otranto on her port side amidships. A deep hole was punched in Otranto, below the waterline and directly between boiler-rooms, both of which instantly flooded, killing most of the crew in those spaces.

When the engine-room flooded shortly afterwards, Otranto lost all electrical power and began drifting towards the rocky coast of Islay, a few miles away.

The water pressure caused bulkheads to collapse, quickly flooding other spaces below the waterline and giving the ship a massive list to starboard.

The high winds and heavy seas prevented the launching of lifeboats, and Captain Davidson decided to postpone abandoning ship in the faint hope that some passengers and crew might be able to swim ashore once the ship got closer.

ABOUT 30 MINUTES AFTER the collision, the British destroyer HMS Mounsey, which had been searching for the convoy, appeared.

Despite Davidson’s order to stand clear, Mounsey’s captain, Lt Francis Craven, positioned his ship on Otranto’s lee side to allow her men to jump aboard.

Several times the two ships struck each other, holing the destroyer’s hull, smashing her bridge, flooding two of the three boiler-rooms and breaking many hull-frames. Yet Craven kept his small ship close and rescued 300 US troops and 266 of Otranto’s officers and crew, though many men had been washed from the decks or crushed between the ships.

Mounsey made it to Belfast safely, although she was too badly damaged to return to her home port against the storm.

About three hours after the collision, a large wave dropped Otranto onto Old Women’s Reef, about three-quarters of a mile offshore near the entrance to Machir Bay. Unfortunately the vessel missed a sandy beach just north of the reef.

The action of the enormous waves quickly broke the ship in half, then ripped her bottom out. Of the 489 or so men left aboard after Mounsey had had to depart, only 21 were able to swim ashore, two of whom later died of their injuries. The islanders were able to help rescue some of these men.

By the following morning the liner had been demolished by the heavy seas and the coastline was strewn with wreckage and hundreds of bodies. The best estimate of the casualty toll was 460, including 12 officers and 84 crew, one officer and 357 American enlisted men, and six French fishermen.

After the war, most of the American bodies were reinterred at Brookwood American Cemetery & Memorial in Surrey or repatriated to the USA.

And a 24m stone tower was built on the Mull of Oa by the American Red Cross to commemorate the men lost aboard Otranto and also the Tuscania.

WE MADE THE 370-mile journey north, landed in Port Charlotte, got the compressors running, pumped the 15-litre tanks and launched the boats.

The weather forecast looked good, dry with sunshine and an 8mph south-west wind. The Otranto is very exposed to anything westerly but as long as the wind stayed below 14mph we would be OK.

The first divers descended the 15m and fastened the buoy-line close to the 6in forward gun. Visibility was such that it was possible to see the RIBs outlined at the surface as kelp was cleaned from the barrel.

Two more divers were put in by the propeller-shafts and fastened a second buoy at the stern – the two fixed points would give access to all areas during the week.

The very broken wreck covers a large area of about 100 x 100m, bigger than a football pitch but heavily covered in kelp, known locally as tangleweed.

The second wave of divers continued to strip the kelp back from around the gun until it was clear enough for the flags to be fastened. As they flew in the current, it was a moment to pause and reflect. It was an honour and a privilege to be part of the raising of the flags.

The team spent the rest of the week scouring all areas of the wreck. The thick kelp would sway in the swell and occasionally waft across our masks and blank our vision.

We concluded that when Otranto had been stranded on the reef her bow had been facing north. She had broken her back in two places, forward of the front boilers and behind the back boilers, the bow and stern swinging to the east in the mountainous swells and turning towards the shoreline, almost meeting each other. This was supported by the debris we were finding.

We started naming the areas: Bow, Stern, The Pit, The Boilers, Engines and Cordite Alley. Four large intact boilers towered 5m over the seabed, the lower parts free from growth, perhaps because they had been rocking in the winter swells. The engines were less clear to see, but behind the kelp con-rods, cylinders and the block were visible.

Large sections of the hull inner and outer bottom could be seen, and shining a torch inside revealed narrow passages as far as the eye could see, and twin steel prop-shafts almost a metre in diameter.

By the stern section the massive steering A-frame stood 4-5 high, and at its side lay the huge rudder.

We saw many live 6in shell warheads, two deep in places, and small-arms ammunition concreted in 100 years of sand and sediment.

In the bow area two 6in guns sat on their pedestals, barrels pointing into the open water. Below them lay large steel hull-plates, some bent by the force of storms, with their rows of portholes.

Two securing bollards sat upright, and there was general debris everywhere – broken and rotted timbers, wiring, what looked like floor tiles and many 2in hexagon wall-tiles, originally white.

Over in the Pit was debris from where the bow, stern and amidships areas had merged, with small arms munitions and occasionally soldiers’ boots, rotted but clearly identifiable.

Two 6in gun-barrels lay side by side in the kelp, with trunnions pointing skyward and, 6m away, another 6in gun next to several of its warheads.

There was evidence of the toilets and washrooms in the shape of broken sanitary-ware A massive deck-winch sat upright amid broken superstructure, with hull- and deck-plates everywhere.

The good weather allowed us all to complete our two dives a day but the forecast south-westerly Force 10 Storm Hector would, we knew, halt diving by the Thursday.

So we recovered the flags and removed our lines and buoys, leaving nothing but memories to share.

WE VISITED THE ISLAY MUSEUM to see the original flag used for the burials of US troops from Otranto and Tuscania, hand-sewn very quickly by the women of Islay in their honour.

The Smithsonian Institution in America had loaned this flag for the 100th anniversary of the sinking.

The same day we went to visit the monument, taking with us the flags that we had been flying under water all week on Otranto, and allowing them to fly briefly there once again.

A beach-clean in Kilchearan Bay completed the day. Deep emotions felt by the team during this memorable expedition ranged from honour to sorrow.

The 54 hours we spent under water allowed us to complete a map and underwater video showing how the wreck lies today.

The flags are now due to travel to the American Legion in Nashville, Georgia, which holds a remembrance parade every 6 October. This year it plans to display them along with the video footage in the city hall.