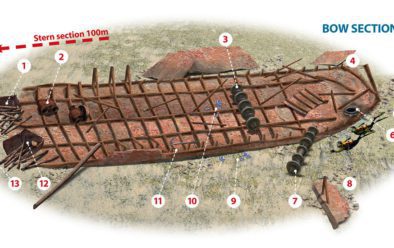 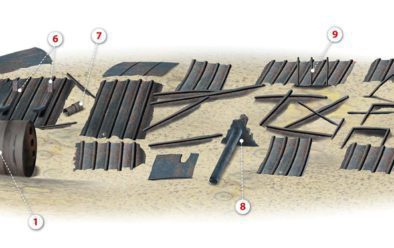 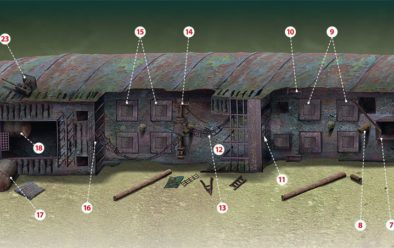 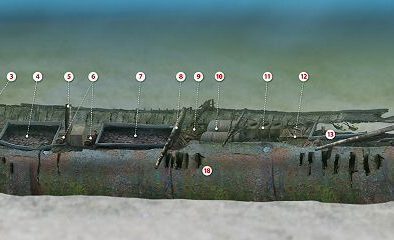 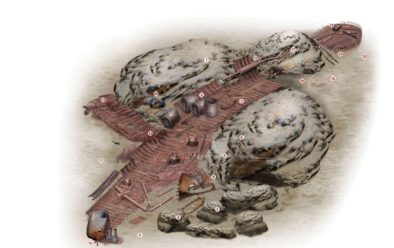 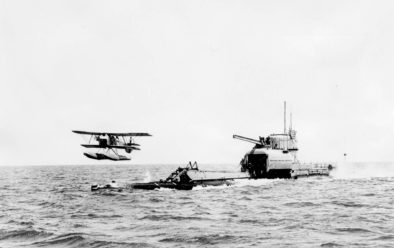 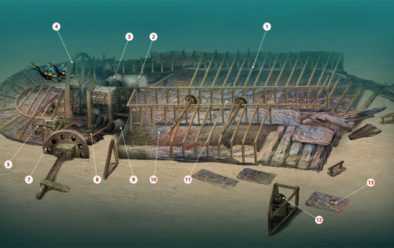 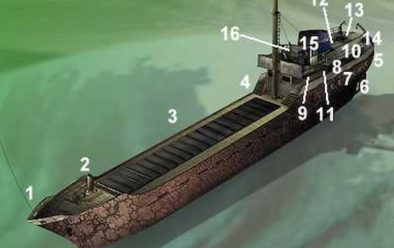 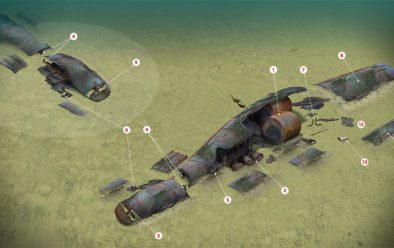 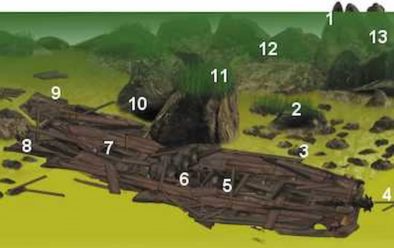 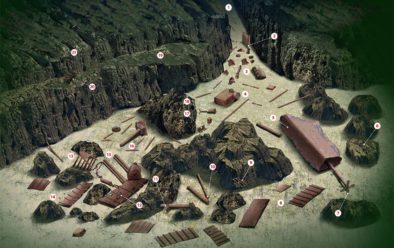 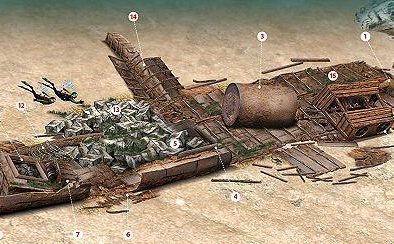 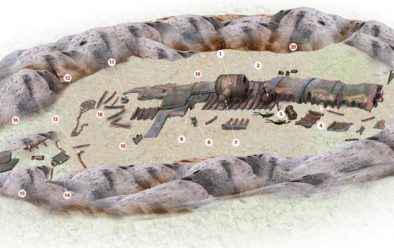 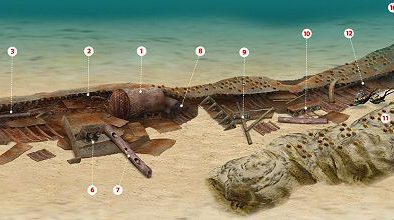 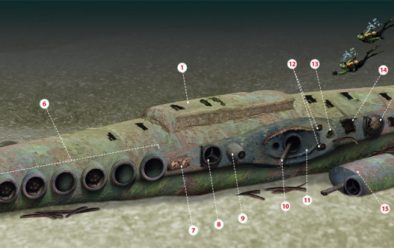 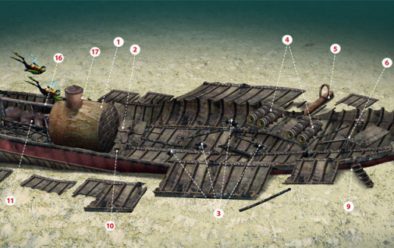 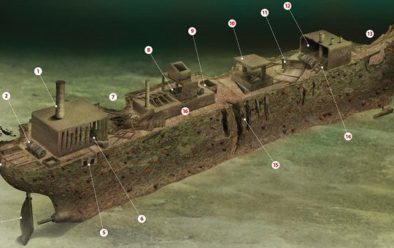 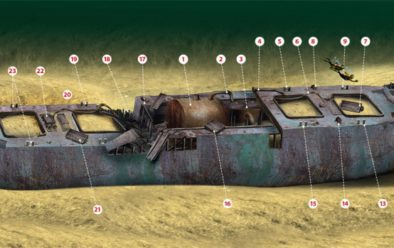 Located off the Isle of Man, this wreck represents a slice of history, as one of the last steam coasters and one of the first mine-laying U-boat victims. JOHN LIDDIARD leads the Wreck Tour. Illustration by MAX ELLIS

THIS MONTH’S WRECK IS ANOTHER CLASSIC steam-powered coaster that has broken its back, although this one was the victim of a mine, and a much newer design than the Vendome, featured last December.

Our tour begins by the aft cabin (1), which is the highest point of a wreck that does not rise that far from the seabed. The wreck leans about 30° to starboard, so orientation aft is achieved by heading for the lower side of the deck and keeping it to your right.

At the stern there is a small scour to 38m. The propeller just shows, with three blades broken close to the hub and one intact (2). Rising above the stern, there is a good chance of seeing a big shoal of pout hanging just off the wreck, with a fair number of larger saithe among them.

The steering mechanism is partly buried in debris (3). I suspect that because the Ringwall was built in 1921 it was enclosed below deck, and that the debris is the remains of the deck above it. To either side of the deck are small pairs of bollards.

On the aft wall of the cabin, towards the starboard side is a small anchor (4), most likely fouled and lost rather than part of the Ringwall’s equipment. To the port side of the cabin, an intact ladder is fixed to the wall (5), rising to a cabin roof that is no longer there. Between the two are empty portholes ringed with anemones.

The inside of the cabin is easily accessible through the gap where the port wall would have been. Inside, at a level just above that of the main deck, is the top of the Ringwall’s small steam engine (6), although on a ship of this size access below is severely restricted.

Despite being built in 1921, when triple-expansion engines had been the norm for 40 or 50 years, the Ringwall was fitted with a two-cylinder compound engine. This apparently retrograde engineering was a common design compromise on small coasters. Fitting a smaller and less efficient engine left more room for cargo within the same size of hull.

Exiting again through the broken port wall and continuing forward, the single boiler takes up the entire width of the hull and rises just above main deck-level (7). The space forward of the boiler would have been the stoke-hold and bunker space. A section of deck with ventilator hatches bridges this and then, on the port side, a section of the hull is folded inwards (8).

Another cabin (9) with supporting beams either side would have been the base for the wheelhouse. Access is available through the roof or through an open doorway on the port side.

The starboard side is best avoided, because a trawl net complete with beam is draped across it (10). Inside the cabin, a section of black-and-white-tiled deck indicates the location of a bathroom or galley.

Forward from here is the area of the holds (11). With the Ringwall’s back broken, the line of the keel turns approximately 30° to starboard.

The holds are pretty well broken, folded in from the port side and broken outwards to starboard. Staying towards the port side, another trawl-net and beam is fouled against the wreck, this time with the remaining net tangled close to the wreck and of little hazard to divers (12).

From the forward end of the trawl-beam, the wreck begins to regain some structure, with a short section of the port side of the hold remaining intact. Somehow the cargo-winch has managed to fall in below this (13), perhaps tumbled there by the trawl. Above the winch, the deck is reinforced to mount a pair of large mooring bollards (14).

The bow (15) is reasonably intact, like the stern with a 30° or so list to starboard. The anchor-winch is still in place, though at the tip of the bow (16) there are no traces of the anchors. The seabed here is scoured a little deeper, to 42m, with the bow deck at 36m.

More trawl-net is caught over the starboard side of the bow (17), though this time without any beam. Perhaps it was part of the trawl caught across the holds.

Unlike the port side of the holds, behind the bow the starboard side is soon broken to the seabed. The corresponding pair of mooring bollards are adrift on their mounting-plate (18).

ON 27 JANUARY, 1941, the 407 ton British cargo steamer Ringwall became one of the first victims of a German mine-laying U-boat, one of the boats that the Germans built in secret, starting in a Kiel shipyard in 1933.

Ringwall was travelling from Dublin to Silloth in ballast and struck one of the new, highly efficient German mines as it swung south of the Isle of Man, heading for the Solway Firth, writes Kendall McDonald. The mine blew a great hole in its side and it sank quickly – so quickly that all eight of its crew went down with it.

U-boats were built in Germany long before the start of WW2, despite an agreement between Hitler and Britain to restrict German naval building to far less than half that of the naval tonnage of the British Commonwealth.

Unfortunately for British shipping, this agreement excluded submarines from restriction and, 11 days after signing, the Germans openly launched their first new U-boat since 1918. By the end of 1935, their flotillas had 14 U-boats, and at the outbreak of war on 3 September, 1939 that figure had grown to 59, of which 39 were listed as Frontboote (fully operational), and the rest were being used for training or on sea trials.

Some of the new German U-boats were soon laying mines in small fields in the Irish Sea. They aimed to sink the vital sea traffic heading for Liverpool, carrying war supplies and food to Britain from the USA.

The Ringwall was built in 1921 by Day, Summers & Co in Southampton. It was small, just 44m long with a beam of 8m, and was launched as the Mary Summerfield. Owners Wallace Brothers of Liverpool changed its name in 1930.

It had a 60hp two-cylinder compound engine with a single boiler and was meant for coastal trading. The Ringwall was not the size of vessel for which the German mine that sank it was intended.

GETTING THERE: Ferry from Liverpool or Heysham to Douglas with the Isle Of Man Steam Packet Company, 08705 523523.

TIDES: Slack water is essential and occurs one hour before low water and high water Liverpool.

QUALIFICATIONS: Best suited to experienced divers prepared to do some decompression.

PROS: A chance to dive the last evolution of steam coasters before diesel engines became the norm.

CONS: Well out of the way.

Another Isle of Man Wreck Tour on Divernet: Thracian