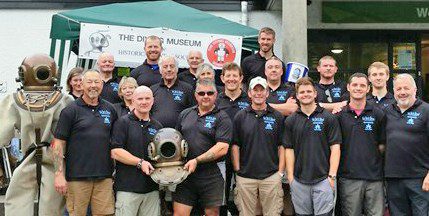 A fund-raising relay team has succeeded in reaching the summit of Ben Nevis, the UK’s highest mountain, while wearing an 80kg vintage diving suit.

Swapping the suit between them for every 100m of the 1350m ascent, the team of six completed the feat in two and a half days – at least a day faster than expected.

The Seabed to Summit Challenge began on Saturday (1 September) at a depth of 5m in nearby Loch Linnhe, as a diver plodded to dry land via a pier. Team-members then completed the 2.5-mile trek via Fort William to the foot of the mountain.

They began the gruelling ascent the following day and had managed to scale 1000m by Sunday night.

Overnight two of the team camped out along with the suit on the mountain while the others descended to stay at Fort William’s Underwater Centre, which provided free support.

Reunited by 9am on Monday, the team completed the climb in under four hours, and celebrated their achievement at the summit.

Their target of raising £4430 – £1 for every foot climbed – was exceeded as they collected around £5000 in online contributions plus cash donated by well-wishers along the way.

The challenge was the idea of former Royal Navy clearance diver and mountaineer Ginge Fullen, 50, who lives in Fort William, and Ty Burton of the HDS, which provided the suit and expert support.

The proceeds of the challenge will be divided between the HDS, Lochaber Mountain Rescue Team and the family of Saman Kunan, the Thai diver who died during the recent Tham Luang cave-rescue operation.