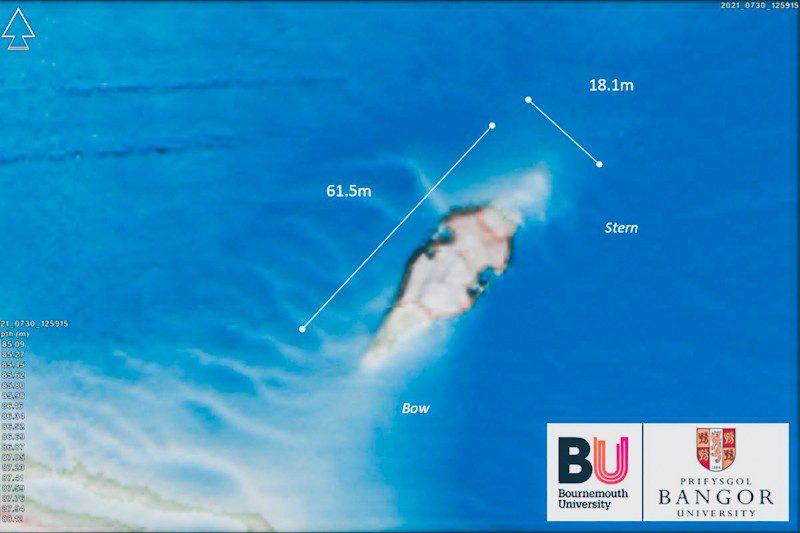 An Irish Sea shipwreck once thought to have been a submarine has been identified as HMS Mercury, a WW2 minesweeper. The 68m paddle-steamer sank in 1940 after being damaged by a mine it was trying to clear off southern Ireland.

Researchers at Bangor University’s School of Ocean Sciences worked with maritime archaeologists at Bournemouth University to make the discovery. They have collaborated for some years to identify Irish Sea wreck-sites through a combination of multibeam sonar-scanning from Bangor’s Prince Madog research vessel and archival examination.

“Once the sonar data had been processed, the wreck resembled a paddle-wheeled vessel with its paddles boxed into the vessel’s superstructure, rather than the characteristic tube-like profile associated with submarine wrecks,” said Innes McCartney of Bournemouth University.

Formerly best-known as a technical diver specialising in submarine wrecks, Dr McCartney has compiled a comprehensive database of shipping casualties in the central Irish Sea. This, he said, revealed HMS Mercury to be the only possible candidate.

Originally named Mercury II, the paddle-steamer with innovative boxed-in wheels had been built on the Clyde in 1934 as an excursion passenger ship for London Midland Scottish Railway, working between Greenock, Gourock and Wemyss Bay.

She was requisitioned by the Admiralty soon after the outbreak of war in 1939 and put into service as a minesweeper.

After her loss HMS Mercury was simply listed as “sunk after damage by own mine south of Ireland”. Research at the National Archives revealed that the incident was initiated off the Saltee Islands in southern Ireland on Christmas Day afternoon, as the ship was sweeping an earlier British minefield.

A mine snagged in Mercury’s sweeping gear and exploded beneath the stern. Two hours later the flooding vessel was taken in tow towards Milford Haven in south-west Wales but, after another two hours, the cable broke and the ship sank vertically, stern-first.

The crew were all picked up, but a court martial found that Mercury’s captain, Temporary Lt Bertrand Palmer, had disobeyed standing orders in tackling the mine.

More than 300 wrecks, described as “almost every wreck site in the central Irish Sea”, have been surveyed under the Bangor/Bournemouth “Echoes from the Deep” project.

“Obtaining high-resolution sonar data from all these sites has been crucial to the research process and we hope this work and collaboration with Bournemouth demonstrates the importance of having these valuable assets available to us here at Bangor,” said the university’s Dr Michael Roberts, who led the multibeam surveys.

“These sunken vessels represent the sacrifices and efforts of citizens who were the ‘key’ and ‘essential’ workers of their time, and it’s important that the final resting place of the vessels they were associated with are identified before it’s too late.

“We hope to secure additional funding to expand on this work and examine wrecks in other UK coastal regions before their remnants become unidentifiable due to degradation through natural marine processes.”