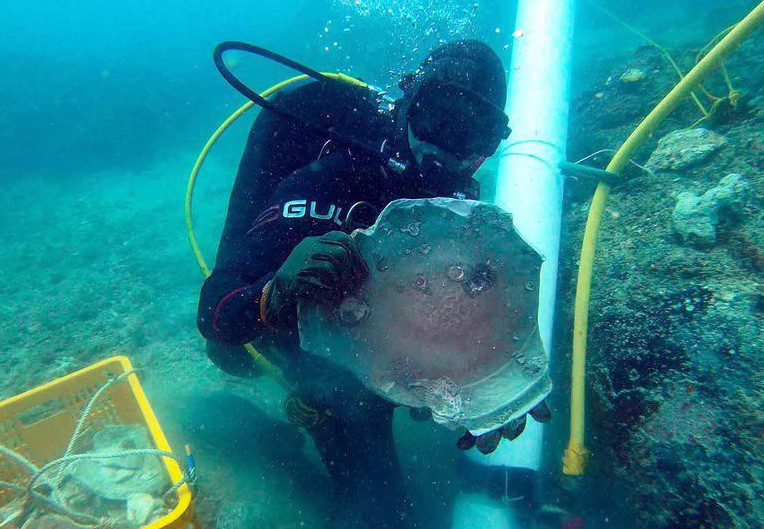 Singapore has a tradition as an east-west trading hub, but without having any historical shipwreck sites. Now a report on the excavation of two adjacent wrecks has changed that, with one of the ships found to date back 650 years or more.

At the end of 2014 a barge ran aground off the city-state’s easternmost island Pedra Branca, where the Singapore Strait meets the South China Sea. It was while clearing debris from the rocky seabed about 100m north-west of the island that commercial divers came across remains of Chinese ceramics.

Plates they brought up resembled those that were being found during a highly publicised excavation on land at the time, so the divers informed the authorities. In 2016 Singapore’s National Heritage Board (NHB) commissioned ISEAS-Yusof Ishak Institute’s archaeology unit to survey and excavate the site.

The work continued until 2019, when widening seabed surveys led to the discovery of a second shipwreck about 300m east of Pedra Branca. Diving on this wreck was only recently completed, and the findings were announced on 16 June.

The archaeologists’ research shows that the two ships sank centuries apart. Blue and white ceramics and celadon greenware found on what was called Shipwreck 1 dated from the time of the Chinese Yuan dynasty (1271-1368), when Singapore was known as Temasek.

Shipwreck 2 turned out to be a much later merchant vessel identified as the Shah Munchah, which sank in 1796 while returning from China to India, where she had been built.

Artefacts recovered from this wreck include a diverse range of Chinese ceramics as well as copper-alloy, glass and agate objects. The archaeologists also found four anchors up to 5m long and weighing 2.5 tonnes, and nine cannon of the sort mounted on East India Company vessels in the 18th and early 19th centuries.

“Apart from a large cargo of Longquan greenware and other ceramics, she carried more Yuan dynasty blue-and-white porcelain than any other documented shipwreck in the world. Many of the pieces are rare, and one is believed to be unique.”

Of the Shah Munchah, he said: “Much of her Chinese cargo would have been trans-shipped in India for the onward voyage to Britain. Had she survived another 23 years, she would almost certainly have called at the re-established port of Singapore.

“Her incredibly diverse cargo provides great insights into the type of goods that would have been exchanged and purchased by the new inhabitants of this fledgling city.”

Retrieved artefacts are being conserved, researched and documented with a view to being exhibited by the NHB next year.