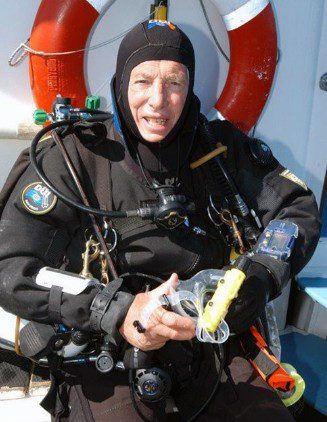 Gregg Bemis, the man who devoted more than 50 years to establishing the cause of the rapid sinking of the WW1 U-boat victim Lusitania, has died a week before his 92nd birthday.

The American ex-venture capitalist became the world’s oldest decompression diver in 2004 when, at the age of 76, he carried out an hour-long dive on the 91m-deep wreck. He also later dived it in a submersible on a National Geographic expedition, one of several he helped to finance.

Bemis owned the wreck of the iconic liner off southern Ireland but, suffering from ill-health, had bequested it to the Old Head of Kinsale Museum last May, as reported on Divernet.

Since 2011 the New Mexico-based businessman had donated many artefacts recovered from the wreck-site by divers working under licence. The bequest was to take effect either on his death or once a dedicated Lusitania annexe of the museum had been completed. He said he believed that the museum committee was best placed to preserve the Lusitania‘s legacy.

The 240m Cunard transatlantic liner was the world’s biggest ship in 1915. She was approaching Liverpool on her way from New York on 7 May when she was struck by a single torpedo from the German U-boat U-20.

The ship had been carrying almost 60 tonnes of munitions along with 1960 passengers and crew, of whom only 760 survived. Her sinking was condemned as an outrage around the world and was thought to have played a significant part in bringing the USA into the war.

In 1968 Bemis acquired an interest in the wreck, lying on its starboard side 11 miles off the Old Head of Kinsale. Fourteen years later he paid one dollar to become its sole owner, with full salvage rights, over which he would later clash with the Irish government.

Describing Lusitania as “the second most famous wreck in history after the RMS Titanic”, he had long expressed his determination to establish the cause of a second internal explosion that occurred soon after the torpedo strike, causing the liner to sink within 18 minutes.

He might have failed to complete that mission in his lifetime, but he was also committed to keeping the Lusitania story alive and exploiting to the full its value to Irish tourism through the museum.

Ireland’s government had placed a national heritage order on the war grave in 1994 to ensure respectful, transparent investigations – causing Bemis later to claim that the licensing conditions attached had frustrated his divers’ bids to learn more about the sinking.

Technical diver Eoin McGarry found four million rounds of small-arms ammunition on the wreck in 2008, and in 2016 retrieved one of the ship’s telegraphs.

Since his friend’s death he has told the Irish Examiner that Bemis “always wanted to find out what caused the second explosion on the Lusitania, and the mantle we have to take on is to find that out. We hope to get an expedition going for a forensic examination of the bow area.

“But the captain of the ship has gone – he was like a father-figure to me,” he said.