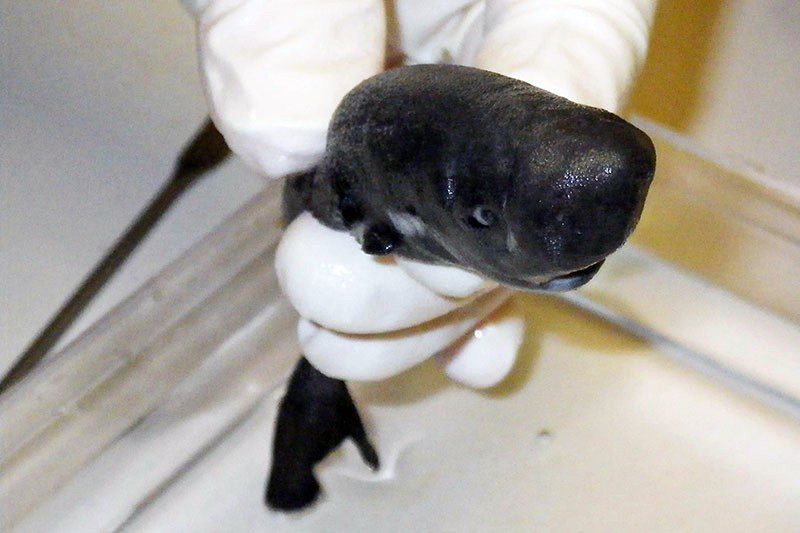 It was discovered nine years ago in the USA’s Gulf of Mexico, one of the only two “pocket sharks” ever found, but now the “glow-in-the-dark” shark has been officially classified as a new species, Mollisquama mississippiensis.

The “exceedingly rare” American pocket shark is only 14cm long, but gets its name not because of its diminutive size but because of the “pockets” located just behind its pectoral fins.

These contain glands that produce a bioluminous fluid which, along with light-producing organs called photophores that cover much of its body, give the deep-dwelling shark the ability to glow in the dark.

The specimen, found in 2010 during a National Oceanic & Atmospheric Administration (NOAA) sperm-whale research expedition, was a young male – and turns out to be a different species from the only other example of a pocket or kitefin shark to have been discovered.

That earlier find, a 40cm female caught at 330m in the eastern Pacific off Chile in 1979, was described in 1984 and is kept at the Zoological Museum in St Petersburg, Russia.

The American pocket shark turns out to have five features not found in the Chile specimen, say the researchers, including the multiple photophores and fewer vertebrae.

The research, just published in Zootaxa, was led by Mark Grace of the NOAA’s NMFS Mississippi Laboratories and Henry Bart and Michael Doosey of Tulane University Biodiversity Research Institute.

“The fact that only one pocket shark has ever been reported from the Gulf of Mexico, and that it is a new species, underscores how little we know about the Gulf,” said Bart.