Whalers did their worst – but their prey are back!

Whalers did their worst – but their prey are back! 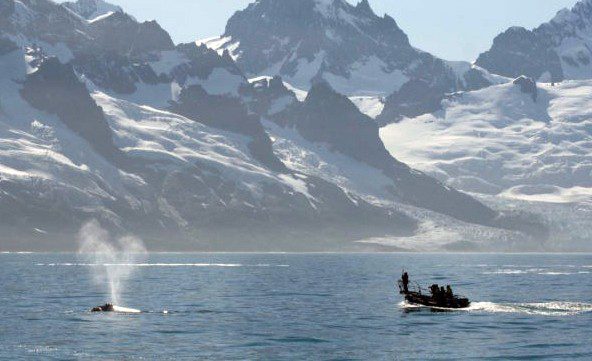 Endangered humpback and blue whales are returning to the south-west Atlantic in unexpected numbers.

A team led by British Antarctic Survey (BAS) recently returned from the last of three expeditions to the sub-Antarctic island of South Georgia. They were investigating how whales have recovered since being given a measure of protection.

South Georgia is a key summer feeding-ground for a number of whale species, says BAS, but the former whaling industry on the island almost eradicated them, killing more than 176,000 over 60 years.

Preliminary results from the expeditions found that humpback whales are now a very common sight in coastal waters, with 790 sighted over 21 days. High densities had been seen in 2019 and 2020, and it is estimated that 20,000 now feed seasonally at the location.

The estimate correlates with those obtained from the humpbacks' winter breeding ground in Brazil, suggesting that South Georgia is one of their most important south-west Atlantic feeding grounds and that they are now very close to full recovery.

A bigger surprise for the researchers was the relative abundance of critically endangered Antarctic blue whales. These had been heard but sighted only once during the 2018 survey – but this year 55 were seen in 36 sightings.

For such a rare species, this is unprecedented, says BAS, indicating that, as with humpbacks,  South Georgia waters remain an important summer feeding ground for blues.

“After three years of surveys, we are thrilled to see so many whales visiting South Georgia to feed again,” said project leader Dr Jennifer Jackson, a whale ecologist at BAS. “This is a place where both whaling and sealing were carried out extensively.

“It is clear that protection from whaling has worked, with humpback whales now seen at densities similar to those a century earlier, when whaling first began at South Georgia.”

The researchers were also able to satellite-tag two rare southern right whales in a bid to determine their feeding areas in summer and autumn. Their movements can now be tracked live here.

Southern rights are slowly recovering from whaling in the south-west Atlantic, says BAS. They were regularly seen during the 2018 survey, but only rarely in 2019 and 2020, suggesting that they have moved on from South Georgia waters.

Early explorers visiting South Georgia reported seeing “hundreds and thousands” of whales there, and the whaling stations that were set up killed humpbacks close to the coast from 1904 to 1920, then blue and fin whales further offshore until 1945, and finally sei whales until 1965.

After that whales were scarcely seen until the 1990s, when sightings began to rise.