You could head for South Africa in the hopes of being in the right place at the right time on the Sardine Run – or you could take a chance off Cornwall, because you never know your luck. HENLEY SPIERS enjoys an auspicious start to his UK diving career 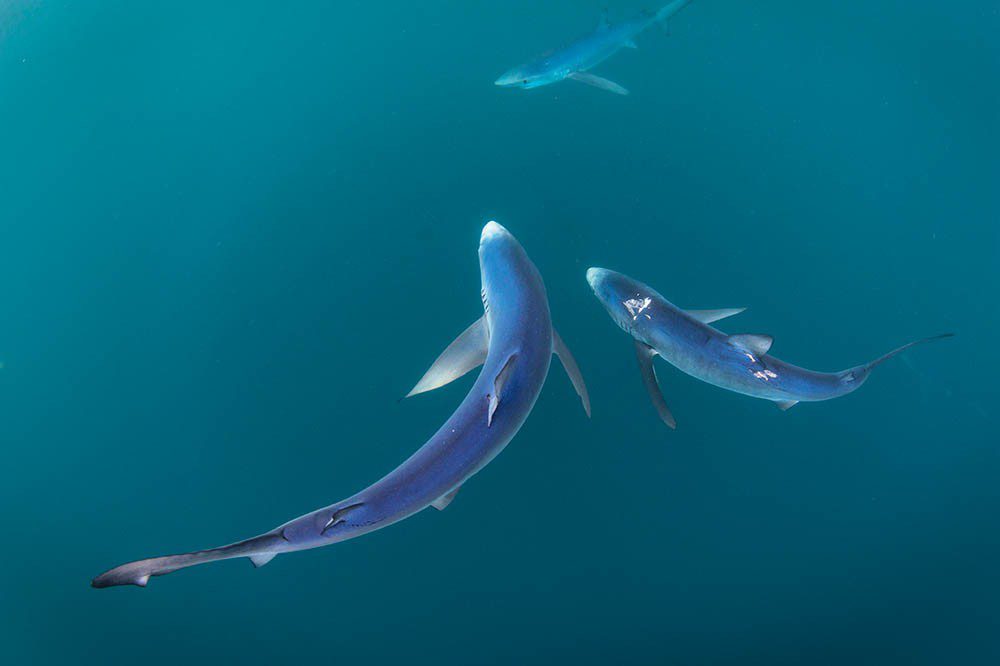 I GOT BACK INTO THE RIB ELATED, and was promptly sick over the side. Seconds later, another of our party, Mark, was also revisiting his breakfast.
In a few moments Simon had climbed the ladder and proudly joined the chorus of vomiting. Soon I was laughing, high on adrenaline and amused by the absurdity of grown men forking over wads of cash in exchange for a weekend spent spilling their guts out at sea.

Somewhere in the background, our captain quietly congratulated himself on maintaining his “100% chunder record” and the last member of our group, John, wondered why the visibility had taken a sudden turn for the worse.

The strangest thing is, I was loving the experience and would do it again in a shot!

We were floating 20 miles off the coast of Penzance, searching for the elusive blue shark in what has to count as one of the most spectacular wildlife encounters in Britain today. The trip is conducted by Charles Hood, who has years of experience leading visits to some of the most famous shark spots in the world.

Back in the 1990s, he would go in search of blue sharks Stateside but, over time, encounters became scarce. Their numbers had been noticeably diminished by commercial fishing.

Reminded that blue sharks are one of the ocean’s great pelagic wanderers and, presumably, were also present closer to home, his quest to find the blues in Cornish waters began.

These are sharks that spend most of their time in cool, deep water, beyond the limits of recreational diving.

Fishermen in Cornwall would hook the occasional blue, and provided guidance on where they could be found.

Charles tried chumming the waters to lure them in and, over a number of attempts, found reducing the amount of bait to be most effective.

This narrowed the area of the oil-slick, which led the sharks closer to the boat.

Over 10 years, the art of finding and attracting the blues was refined, and now the experience is open to an eager crowd of underwater photographers and marine enthusiasts.

Our group of four had boarded the RIB at 9am on a moderately sunny morning. We raced out of the marina to find a lumpy sea. Our outing the previous day had been cancelled because of bad weather, and conditions today were passable but not ideal.

Playful dolphins rode our bow as the coastline became a distant haze. After a 45-minute ride, the RIB came to a halt and Charles put out some pungent bait. A short while later the first blue shark appeared, boosting our spirits. However, Charles advised us to wait for another shark to appear, because this would make them less skittish around humans.

A long pause ensued, and as the boat rocked in the swell, most of us started to feel a little ropey.

Make no mistake, this is an adventure, not a luxury cruise. Once signed up, you’re in for a long day out at sea, exposed to the elements with whatever food and drink you remembered to bring aboard.

Enduring a little hardship only sweetens the taste of reaching your goal and, after a couple of hours, we had up to four blue sharks circling the boat.

A little confession: at this point, I’ve had a 19-year dive career that started in balmy Caribbean waters and never strayed from the tropics. I am, or at least was, a warmwater wuss.

Zipping up the thickest wetsuit I’d ever worn in my life, I was both excited at seeing the sharks up close, and apprehensive about my ability to deal with the cool water. Rolling off the RIB, I gasped as the temperature-difference hit, but this was quickly forgotten when a blue shark came straight at my dome-port!
My adrenaline was racing, and the sharks were now cruising just a few feet below the boat, taking turns to make passes at the small fish-head on Charles’ line. Positioning ourselves on either side of the bait, we could encounter the blues as they came in for a chomp.

This is run as a snorkelling rather than a scuba-diving tour and, as the sharks swam at pace right beneath us, it proved easier to forget viewfinders and just shoot from the hip. From a warmth perspective I was envious of those in drysuits, but the agility of a wetsuit did allow for more duck-diving to open up different camera-angles.

Adult blue sharks grow to somewhere between 2 and 3m, and these were on the smaller side. Later we found out that they were females, drawn in seasonally by the presence of squid in Cornish waters.

From about October, the squid run out and the sharks migrate back to the Atlantic, joining their male counterparts.

WHATEVER THEIR SIZE, blues are among the best-looking sharks I’ve ever encountered. Their counter-shaded bodies are white on the underside and with a glistening blue back. Streamlined, they move with an elegant lethargy and possess the oversized pectoral fins typical of pelagic sharks.

They have large, puppy-dog eyes, formed into a perfect circle on either side. They are curious without being aggressive, and swimming among them was a fantastic experience.

Henley quickly forgot about the cool water as a blue shark came straight at his dome-port.

Our eyes were on stalks in anticipation of where they would appear from next, and a mesmerising shark ballet occurred as they swept and swooped around us.
With a moderate current, the hardest part was not getting so caught up in the action as to drift too far from the RIB.

Blue sharks have large litters, typically giving birth to between 25 and 50 pups at a time. This ability to reproduce relatively fast means that, despite a gobsmacking estimated annual catch of 20 million, they are listed only as “near threatened” by the IUCN!

They are targeted for their fins, and their inquisitive nature means that they often end up as by-catch on long-lines

and in drift-nets. This is also a popular species among sport fishermen, and each morning we would pass a boatful of people out to find the blue sharks but with a markedly different objective to ours.

They do operate a catch-and-release policy, but we would see the painful side-effects on several battle-scarred sharks, some wrapped in fishing-line and with chunks of flesh missing.

All of this was a sad reminder that, at present, no conservation laws protect blue sharks in the UK.

After a full day at sea, we fell into a deep slumber and arose to do it all over again the next day. Simon had to go back home, and in his place arrived Goose, one of the most colourful characters on the British diving scene.

Known to me for having a large tattoo on his back of an underwater scene shot by Alex Mustard, he would live up to his reputation, providing an enthusiastic, expletive-laden commentary as we left the harbour.

I felt better prepared for the day ahead, dosed up on motion-sickness tablets and with a good stock of food and beverages. Knowing that we had a long day ahead and that patience was key, I decided there was no need to fully zip up the wetsuit.

However, nature had a surprise in store. As we sped out onto a calmer sea, we were again greeted by dolphins, and Goose bounced up and down in delight. Five minutes later, and Charles slowed down again as we came across a storm of birds over a disturbed sea.

Goose held his camera aloft and whooped with pleasure. The birds were torpedoing down while large fish attacked from below, thrashing the surface.

In a scene reminiscent of the South African Sardine Run, we had come across a bait-ball being feasted on! I’m no expert, but would later be told by my more experienced buddies that this was a very rare scene indeed.

We decided to try our luck at getting in, and now I regretted not having my wetsuit ready for action. Mark, debilitated by sea-sickness the day before, wasted no time jumping in, and we watched him swim into the heart of the action. Once arrived, he victoriously raised his head and gave a big OK sign back to the boat, the excitement apparent even from 50m away.

The remaining three of us scrambled around the small boat, collecting snorkel gear and cameras. Back-rolling into the cool water and heading for the swarming birds, I wasn’t sure what to expect.

AT THE SCENE, THE ACTION was fast and furious. A school of sardines swam close beneath the surface as birds dived into the sea.

From below, a group of mean-looking, barrel-chested tuna raced in unison at the silver-sided bait-ball. It was such an awesome and unexpected event that I hardly knew where to point the camera. 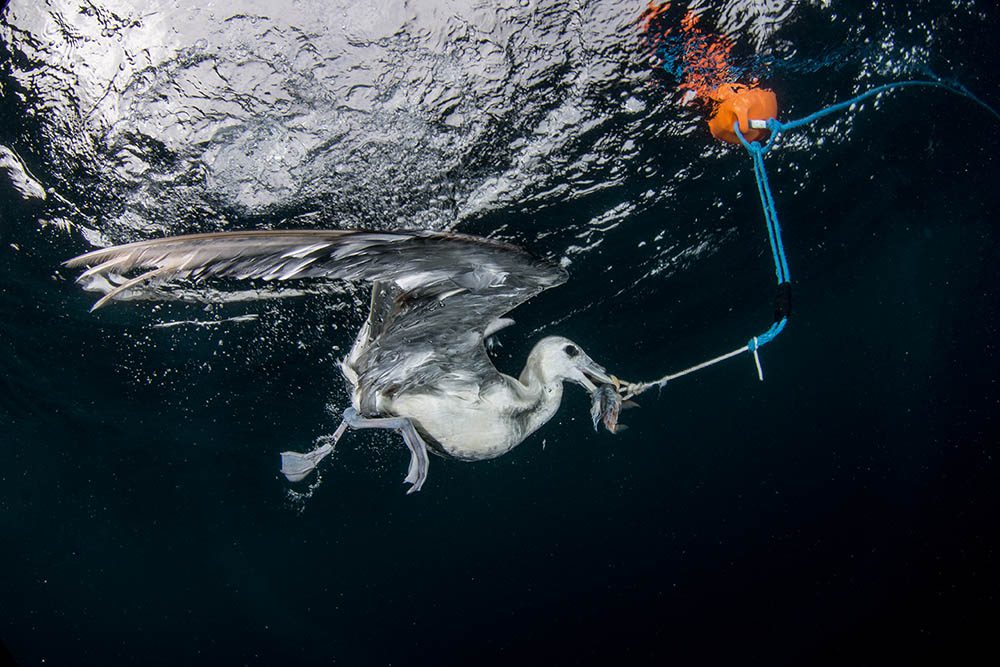 A stupendously brave seagull competes with sharks for food

It was also over after what felt like seconds, birds and fish disappearing all at once. Goose was now in overdrive, shouting out his enjoyment with childish glee. I looked up and cursed myself for failing to capture any images that could convey this incredible experience.

Glancing round and spotting the flock of birds gathered 100m away, I made a dash for it while dialling in camera settings.

Sighting the silver ball of sardines, I knew the bluefin tuna must be close.

Out of the corner of my eye, their ominous silhouettes appeared, working in unison to drive the bait-ball towards the surface. Suddenly they rushed at the sardines, splitting the group and leaving nothing but a hail of fish-scales behind.

As I watched the fearsome tuna disappear and then regather a few feet below, I couldn’t help but be wowed by their power and speed, and felt fortunate not to be among their prey.

The atmosphere was electric, completely unrehearsed and, again, over in just a few minutes. The bait-ball was either destroyed or had made it back into deeper water.

We swam back to the boat and continued into blue-shark territory on a complete natural high – what a start to the day!

The blue sharks proved to be a little more shy than previously, but even on this quiet day we each came away with hundreds of images. In fact you can get up close and personal with the blues without leaving the RIB.

We took turns at positioning two of us on the chum-side of the boat, cameras held under water as the sharks raced at the bait, eyes rolling back into their head for protection at the last moment of attack.

Seagulls had been frequent visitors to the boat, but always exhibited a natural wariness of sharks and snorkellers. That afternoon, however, we came across one stupendously brave individual intent on competing for the baited fish-heads.

Thinking of nothing but its stomach, the seagull dived fearlessly for the bait, over and over again.

Surprisingly, no blue sharks took advantage of the situation and, satiated, the bird floated merrily away.

Heading home that evening, I was elated at the British blue wonders we had encountered, and with a newfound taste for temperate-water action, resolved to no longer be a warmwater wuss!

• Charles Hood runs blue-shark tours from late June until October out of Penzance. Whole boat charter is £840 (£900 weekends) with up to four or five guests allowed on board. Visit charleshood.com for bookings. Henley stayed at the Lombard House Hotel near the marina – rooms start at £40 per night, lombardhousehotel.co.uk