Warrior II, sunk off Portland Bill in the English Channel, has drawn deep-divers since its discovery in the early 1980s. LEIGH BISHOP (left, in his younger days) investigates the wreck of a ship that entertained the world’s wealthiest and most famous people in the heyday of Edwardian splendour 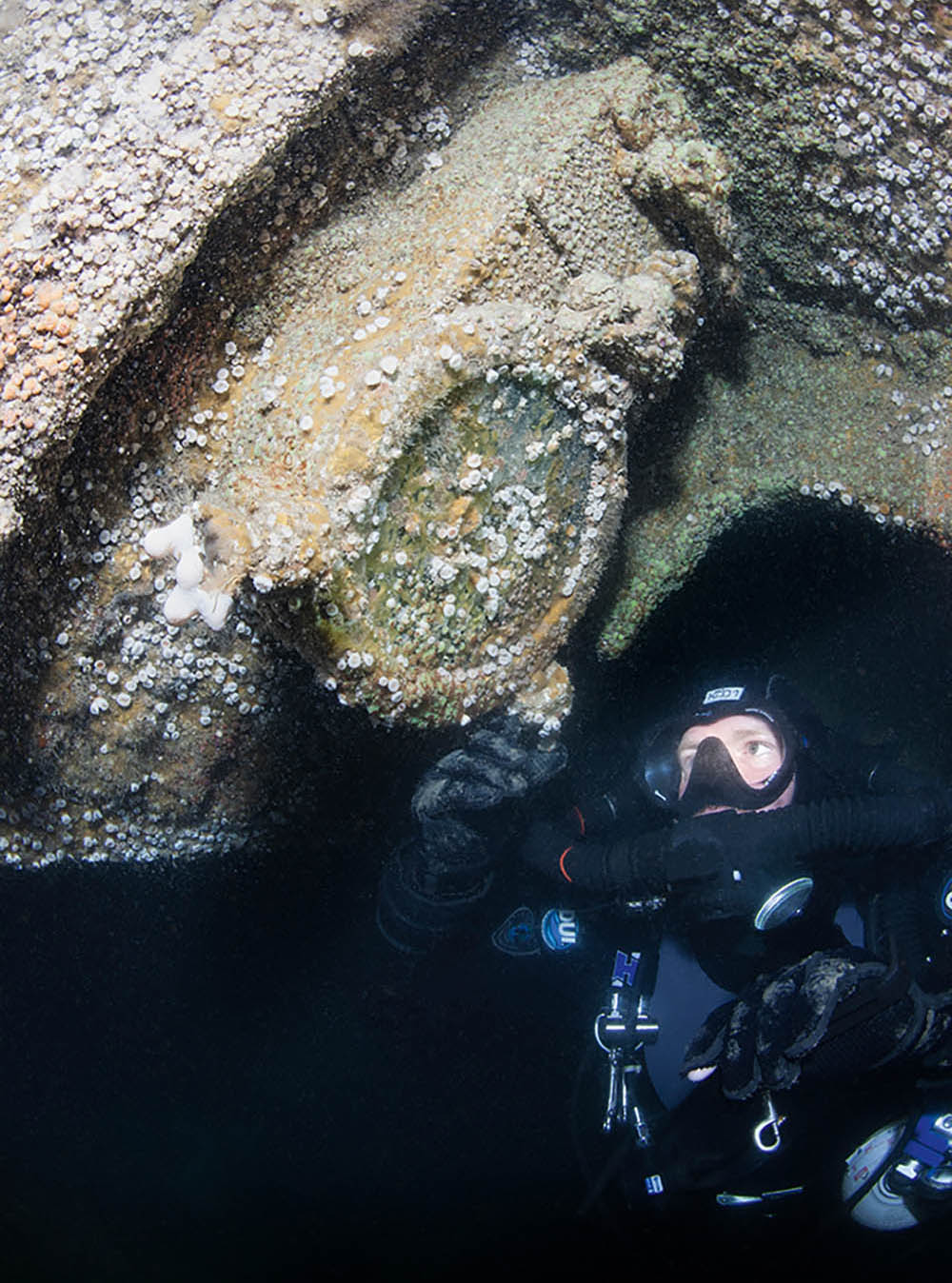 GUE diver Grahame Blackmore inspects one of the rare tropical portholes still firmly bolted to the wreck of Warrior II.

MY FIELD OF VISION stretches as far as the beam of my powerful torch will take it. Wreckage now looms above me – I have swum inside what was once an exemplar of Edwardian opulence. Decorated in fin de siècle Parisian style, HMS Warrior II was once a millionaire’s yacht.

I make my way across twisted and broken metal, searching for interesting artefacts to contemplate and photograph.

Where walls have become ceilings and ceilings walls, my attention is drawn upwards to where my lamp illuminates a tropical letterbox porthole. Fixed firmly to what was the hull, this rare artefact reflects the wealth of the ship and the wonders of the voyages she once took.

Finning across a stone-and-pebble seabed at 56m, I see more grand windows above, this time in rows, and flat to the seabed. Large and square with oval tops and still bolted into the superstructure, they once let light into stately rooms in which some of the world’s richest people talked business and took their pleasure.

At the highest point off the seabed, the remaining boilers stand to a height of almost 3.6m. From their central position I can circumnavigate the rest of the wreckage. Two engines also stand high off the bottom, each with intricate fittings, oil-boxes and pipework, some of it still attached.

Between these engines, a resident and very mean-looking anglerfish entertains us. Then, before we know it, the tide begins to run. Our bottom-time is over all too soon.

We break the surface after an hour of decompression, and the sun of a beautiful June day strikes my face. Waiting for the Portland dive-boat Skin Deeper to lift me from the water, I gaze up at the sky. It’s not easy to imagine the sight, let alone the noise, of the estimated 50 Lufwaffe aircraft that caught Warrior II isolated before setting all hell loose on her.

On that day, 11 July, 1940, Warrior II was bombed to the bottom of the Channel, and with her a rich history of voyages spanning four decades.

No expense had been spared when the Warrior was built in 1904 as a luxury yacht for the multi-millionaire Frederick William Vanderbilt. The Vanderbilts had made their fortune from financing and constructing the New York railroad, and this £500,000 yacht was regarded as one of the most elegant vessels of her day.

A swimming pool graced the upper decks, and a promenade deck aft was considered one of the earliest of its kind.

The Vanderbilt family, associates and friends would cruise the world before other wealthy aristocrats took ownership. Only two world wars could place restrictions on – or terminate – Warrior II’s voyaging.

IN 1913 VANDERBILT sold the ship to his cousin Alfred Vanderbilt, another extremely wealthy US businessman. He changed her name to Wayfarer.

When the USA declared war on Germany shortly after the infamous sinking of the Lusitania in 1915, Wayfarer was one of a number of private vessels requisitioned by the US Navy.

Ironically, Alfred Vanderbilt was one of the most influential American citizens to die as the Lusitania went down.

After the war, Wayfarer was bought by Alexander Smith Cochran, another millionaire and philanthropist, celebrated as the “richest bachelor in New York”. Cochran enjoyed the ship’s elegance for a time before selling her to Spanish shipping magnate Don Ramon de la Sota y Llana, who changed her name again – to Goizeka Izarra, Basque for Morning Star. 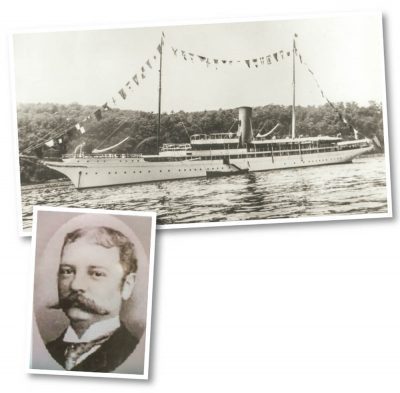 The ship became a legend among the Basques during the Spanish Civil War, when she was made available to the Red Cross to assist in evacuating women and children from Bilbao before it fell to General Franco’s forces.

private owner. He promptly renamed her Warrior but added the II.

When Britain went to war with Germany in 1939, Warrior II returned to Britain and was again requisitioned for military service, this time by the Royal Navy. Her luxurious accoutrements were exchanged for those more befitting a true warrior: a Lewis machine-gun at her bow, depth charges and torpedoes.

She would now escort submarines through the Channel between the naval depots of Portsmouth and Weymouth.

She was sailing alone on her final day when the low-flying German fighter-bombers arrived in two V formations. Warrior II’s crew fought back, but the single bow gun was no match for 50 aircraft. One bomb penetrated the deck, exploding in the vicinity of the ward-room and tearing a large hole in her side.

After 36 years serving the world’s super-wealthy, the career of this graceful ship came to an end.

FOR 42 YEARS, HMS Warrior II lay on the seabed 13.5 miles south-south-east of Portland Bill. The Luftwaffe had pounded her and harsh Channel storms did likewise.

Broken, twisted and unseen, the wreck had been largely forgotten before the summer of 1982, when divers from Kingston & Elmbridge BSAC dived the site from Weymouth dive-boat Skin Deep.

In those days, skippers would ration the wrecks they offered to clients. That week in August, the late Andy Smith produced a virgin wreck for his regular Kingston divers, but there was a slight drawback. At 56m, it ran off the end of their BSAC decompression tables and lay deeper than any of them had been before.

As luck would have it, a member had recently visited Switzerland on business and discovered a set of Buhlmann tables in a dive-shop. They incorporated a card-wheel calculator but were breathtakingly exciting, because they displayed stops for depths way beyond 50m – one at 60m,

The wreck would put the divers way beyond known sport-diving of the time – voodoo territory. They expressed varying degrees of concern, some questioning whether such a dive was survivable at all.

For a 15-minute bottom time they would serve an unheard-of penalty of three separate decompression stops. They all scribbled the Buhlmann 60m table on their slates, located the wreck by Decca, crossed their fingers and went for it!

They soon discovered that what they had originally thought was a small wreck was much bigger than they had imagined. Only the engines and boilers had shown up on the bottom-sounder – the rest of the wreck was broken around the seabed.

The depth gave the 12 divers a half-hour more decompression than usual.

As tidal as the waters are in the Channel, this meant that while hanging on the anchorline they would be pulled down by the fierce current, along with the surface buoy. Somehow they would have to overcome this dangerous situation.

IT WAS BECAUSE of the early Warrior dives that Andy Smith invented the first breakaway decompression system. Divers detached themselves from the main downline, transferring to another that then free-floated with the current under the watch of the surface-boat, which drifted with them.

The invention led to the advanced decompression station developed by Starfish Enterprise (Kingston divers themselves) for 93m-deep Lusitania dives in 1994.

The still-small European technical-diving community saw the free-floating decompression system as a secret weapon held over their US counterparts, enabling them to execute deep-wreck dives successfully in tidal waters. 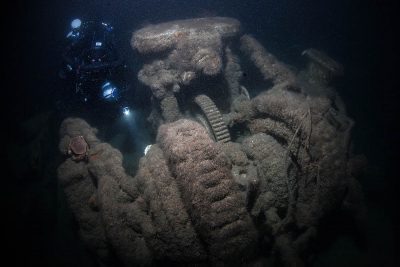 Bow windlass and anchor chains upright on the wreck.

On one early Warrior II dive, Kingston man Bruce Grahamslaw discovered the ship’s bell pinned under the bow. In the attempt to recover it the artefact was damaged and was brought up in two pieces, broken directly across the name.

When the two halves were joined together the words Goizeka Izarra could be read – but what was a Spanish Civil War vessel doing in the Channel?

The Kingston divers had a mystery on their hands. One of them, Alan Dunster, embarked on what would become one of the most extensive research projects on any Channel shipwreck, becoming obsessed with it.

This was a time when researchers had to write and post letters and waited for replies. Dunster’s collection of paperwork gradually accumulated, and eventually he identified the wreck.

He and other original Kingston divers introduced me to Warrior II in the early 1990s, and as I started reading this vast body of research the dives became increasingly interesting.

On one, I recall studying with my dive-partner Chris Hutchison the oil-boxes, gauges and machinery alongside each engine until our bottom-time had been swallowed up, so absorbed were we by early 20th-century engineering!

Over time, as Skin Deep ranged further offshore in its hunt for virgin wrecks, the Warrior was often bypassed. Its location close to Portland Bill meant that if the weather prevented offshore exploration the divers could always fall back on this old favourite. Over time, a bad-weather day became known as a “Warrior Day”!

On 22 July, 2011, Dunster made his final dive on the Warrior II. Something went wrong and, sadly, he didn’t survive.

New York wreck-diver Richie Kohler and Texan Aaron Grigsby flew to the UK to enjoy some summer British-style wreck-diving with me. When bad weather prevented us diving offshore virgin wrecks, I suggested the Warrior.

WHAT IMPRESSION did the wreck leave on US divers who had seen it all? “I wasn’t sure what to expect, but the Warrior didn’t disappoint,” reported Kohler. “Every which way we turned, beautiful historical artefacts of the ship’s construction abounded.

For a wreck often visited by many British divers, I found the Warrior a world-class wreck-dive, and I look forward to diving her again.”

“There is so much history concentrated among the sunken vessels within the English Channel, and despite visiting a wreck that has been frequented by UK divers for years, the Warrior still offered so much allure and opportunities for continued exploration,” agreed Grigsby.

“The massive brass sliding-window-style portholes scattered about the Warrior’s hull beckon to be brought up and restored, and the entire wreck constantly calls for you to spend another 30 minutes of bottom-time, combing through relics obscured in the debris.

“I know I’ve visited a good wreck when I drift along on deco afterwards and replay areas in my head that I’d have liked to spend more time on, and the opportunities possible in the areas I never had enough bottom-time to visit.”

Today Warrior II’s remains lie orientated north/south, bow facing north, at a general depth of 55m. The hull has broken down, while retaining recognisable features, and most of the decks and superstructure have collapsed and, in some areas, are missing altogether.

THE BOW IS THE MOST intact section. Resting to its port side it remains relatively intact, although broken off from the rest of the superstructure. The clipper-type bowsprit appears, as does an anchor to the port side, and divers note the number of portholes that remain fixed and intact within the structure.

It was from here that the Warrior figurehead was removed before the vessel embarked on active wartime service. It is displayed in Bilbao at the family home of the late Don Ramon de la Sota.

Many of the remaining fixtures and fittings demonstrate the high standard to which this ship was built, and no visiting diver could mistake the tiles of what was once the swimming-pool.

Close to an anchor on the port side, the Lewis gun is visible. Although still attached to the bow, it has broken away and lies in the sand.

Many portholes remain fixed into large sections of plating, and in some areas rows of elegant square windows remain with their winding fixtures.

And still visible are those rare letterbox portholes, once used to ventilate those luxurious cabins when Warrior II was in the tropics.