Grey nurse, raggedtooth, sand tiger – despite the range of names they’re all the same much misunderstood shark, with a fearsome appearance that belies its non-aggressive nature. JAMIE WATTS and photographer MALCOLM NOBBS have been spending time with them 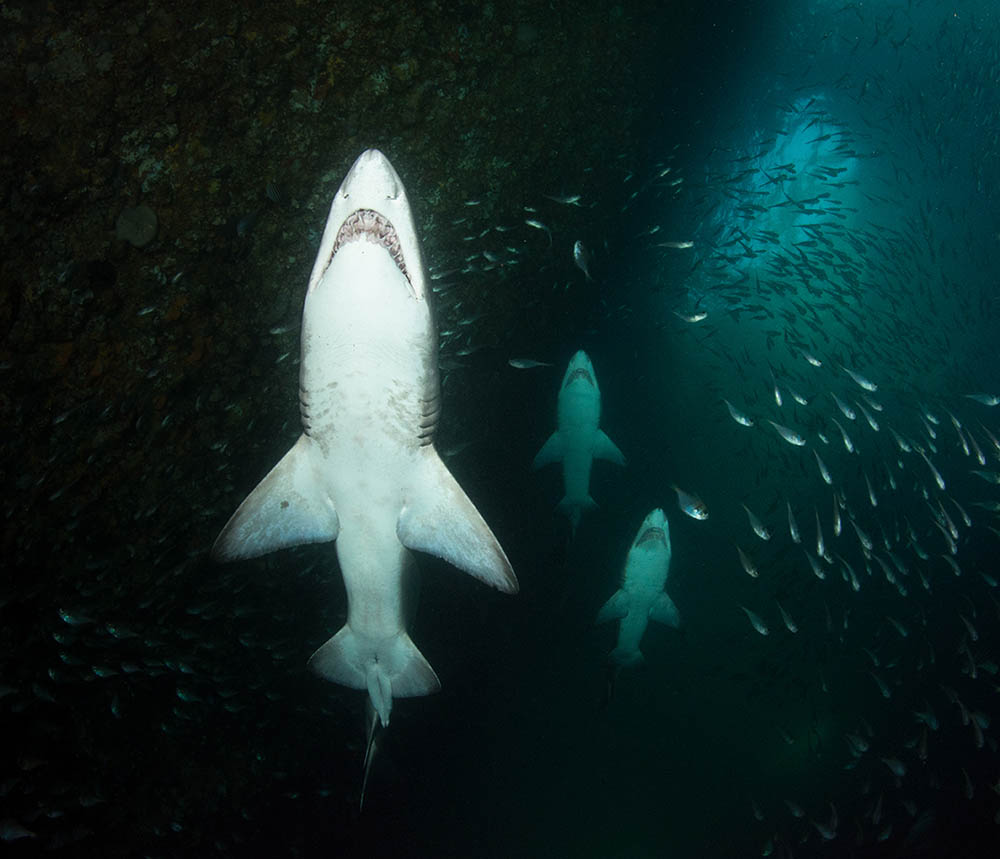 THE FIRST ONE MADE A delightfully dramatic, silent entrance. It’s an impressive form, even by shark standards. It’s properly big, much bigger than I am, thick-bodied yet sleek and tapering from the nose and to the tail, an elegant spindle.

The cloud of sweepers just eased apart in the middle, like curtains framing the rock gully. And slowly, smoothly, with the vaguest sweep of that long tail, the front of the shark pushed through to give me a magnificent view as he aimed for a spot half a metre to the side of my shoulder.

The cone snout, the small, pale eye watching me as he slid past, and the mouth, bursting with row after row of slender, curved teeth. The classic fly-by, perfect for a photographer. Gorgeous.

A wobbegong squats off to the side, managing to look slightly grumpy, as wobbegongs do, but this big beast, one of half-a-dozen I can now see as we move into the gully, exudes calm.

You can see where the South African common name “raggedtooth” came from, although the pedant in me can’t help noting that they don’t have any more side cusps than other sharks.

It’s the whole mouth that looks ragged, not any individual tooth, so “raggedteeth” would be more accurate.

Their other common names don’t make sense. The Australians call it grey nurse, but these sharks are bronze to reddish-brown, certainly far less grey than many other sharks, and they are not even vaguely related to the nurse-shark family – and it’s not clear where the nurse name came from anyway.

Americans call them sand tigers, but they’re nothing like the unrelated tiger shark in either form or habits, and they don’t have stripes, as several sharks do.

You can see instantly why they are sought after by both aquaria and underwater photographers. They look wicked, built how a scary predatory shark is supposed to look, that nightmarish mouth bursting with sharp pointy death – yet they are widely known to be extremely docile and laid-back, easy to care for in an aquarium and easy to interact with as a diver.

I’ve never got to the bottom of exactly what the cause is of the hunched back and spine curvature that invariably happens with raggies kept long-term in aquaria, but it doesn’t look healthy.

Because of how they look and their nature, some of these aquaria offer shark-diving experiences with them.

MOST SHARK SPECIES are fussy eaters of a surprisingly narrow range of smallish fishes or squids. The raggies, however, eat both larger prey and a much wider variety than most sharks. They don’t seem to often, if ever, try to attack the sweepers that shoal here at Broughton Island off the New South Wales coast, partly because they are too small or too agile, and partly because the sharks seem to eat less and rest more when we see them in these shallow sites during the day.

Raggies generally forage a little more at night, heading offshore and a little deeper to do so. The few divers visiting these sharks at night describe them as very different animals by day.

They also become perhaps a little less docile during breeding season, when males get a bit more aggressive and almost territorial around females.

And there have been instances when spearfishermen with struggling prey have earned themselves a nibble. But in most circumstances, these sharks seem to be the most inoffensive of just about any 100kg shark. 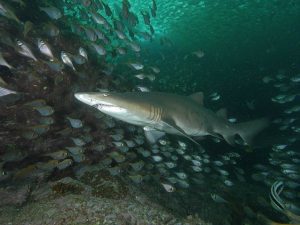 We see many sharks trailing hooks and line, not always from the mouth – they frequently seem to get foul-hooked by passing gear. Observations from local divers and researchers suggest that it might take only a small hook lodged in their throat for at least some sharks to get septicaemia, stop eating and eventually starve to death.

Raggies will take static bait throughout the day and night, although they seem far less keen on trolled bait and lures, which makes sense – they’re not really built to chase moving prey for much more than a quick lunge.

Whether intentionally or by accident, fishing has had a big impact on numbers in Australian and US colonies in recent years. We don’t really have a good idea of what the natural populations were, but based on their feeding reasonably high in the food web, and their habitat, global populations may have naturally once been in the hundreds of thousands.

Today on Australia’s east coast they are listed as critically endangered, down to perhaps a couple of hundred animals, and on the west coast they’re as vulnerable.

Worldwide, the order of magnitude may be a few thousand to a couple of tens of thousands.

Evolutionarily, these are odd beasts. They are lamniform sharks, which means they’re closely related to only a handful of unusual large sharks, including the basking shark, megamouth shark and the warm-blooded predatory makos and great whites.

Not really built like any of their cousins, if anything raggies are most similar in body shape to the unrelated lemon sharks. They’re rather sedentary compared to their closer cousins, and the flat tailstock and long upper tail hint at animals that aren’t built to travel either particularly far or particularly fast.

They are also more sociable than most large sharks, and whether off South Africa or Australia are usually encountered in groups, spending time at a handful of sites in each area in which they occur, apparently at least partly segregated by gender.

THERE ARE ONLY THREE members in the sand tiger / raggedtooth family. The most commonly seen by divers, mainly in cooler tropical and subtropical seas, is the spotted raggedtooth or grey nurse shark.

This is very much the inshore, shallow-water member of the family, conveniently spending the day in diveable depths close inshore, and heading out a bit further and deeper at night to forage. 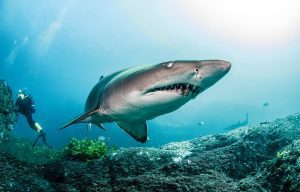 The other two longer-snouted, smaller-toothed species are less frequently encountered, found much further out over deeper water, and apparently live deeper as well as being rarer, probably less sociable and hunting smaller prey.

All three species seem to mature at about the size of a large man, the size they reach at five years old in the case of the spotted raggedtooth. All three species can exceed 3m in length by the time their growth slows to a crawl in their early teens, possibly more. These are big sharks.

Raggedtooths are infamous for uterine cannibalism. The first youngsters hatching inside the mother will eat their siblings and slower-developing eggs.

Nine months or so after mating, two survivors are normally born. Because they are quite mature before having any young, and then have at most only two young per year, recovery rates and population growth are slow, even by shark standards.

Like many sharks, raggies seem to have a temperature range in which they are at their most comfortable, which in the case of the spotted raggedtooth is the 18-24°C sweet spot in the subtropics.

Here water is just cool enough for vertical mixing to provide a richly productive plankton bloom with the seasonal changes – a necessity for a large predator with a healthy appetite for largish fishes.

SO THE SHARKS MOVE along their coasts a little towards the Equator in their local winter, mainly breeding in the late winter and spring in places such as South Africa’s Aliwal Shoals, before following the cooler water away from the tropics to feed and give birth when it gets too warm in summer.

There are places, however, like Wolf Rock in Nelson Bay, and some of the shallow sandbanks off Malaysia and Indonesia, where they can be found year-round in warmer water.

These sharks seem to change their preferred socialising areas over time. Eastern Head off Broughton Island in New South Wales was their preference in 2005, before they moved a short distance to Elephant Rock.

They stayed there for five years before relocating again, this time to nearby North Rock, where they have remained since.

Protected areas need to be revised from time to time to reflect these movements. Aggregations of large predators inevitably have an impact on the local food resources, and it makes sense for animals foraging this high in the food-web to shift around periodically.

We’ll be back, and the diving community here keeps a concerned eye on the numbers from season to season.

For now, however, after a very pleasant hour drifting about the canyon with these big, slightly dopey sharks and through the clouds of sweepers, it’s time to head up and leave them to their downtime.