It’s the start of the UK diving season, so the question is particularly important. For divers “at work” the health and fitness requirements seem quite demanding – is too much expected of them? And should similar standards be applied to all divers? MARK POWELL takes to the water to find out 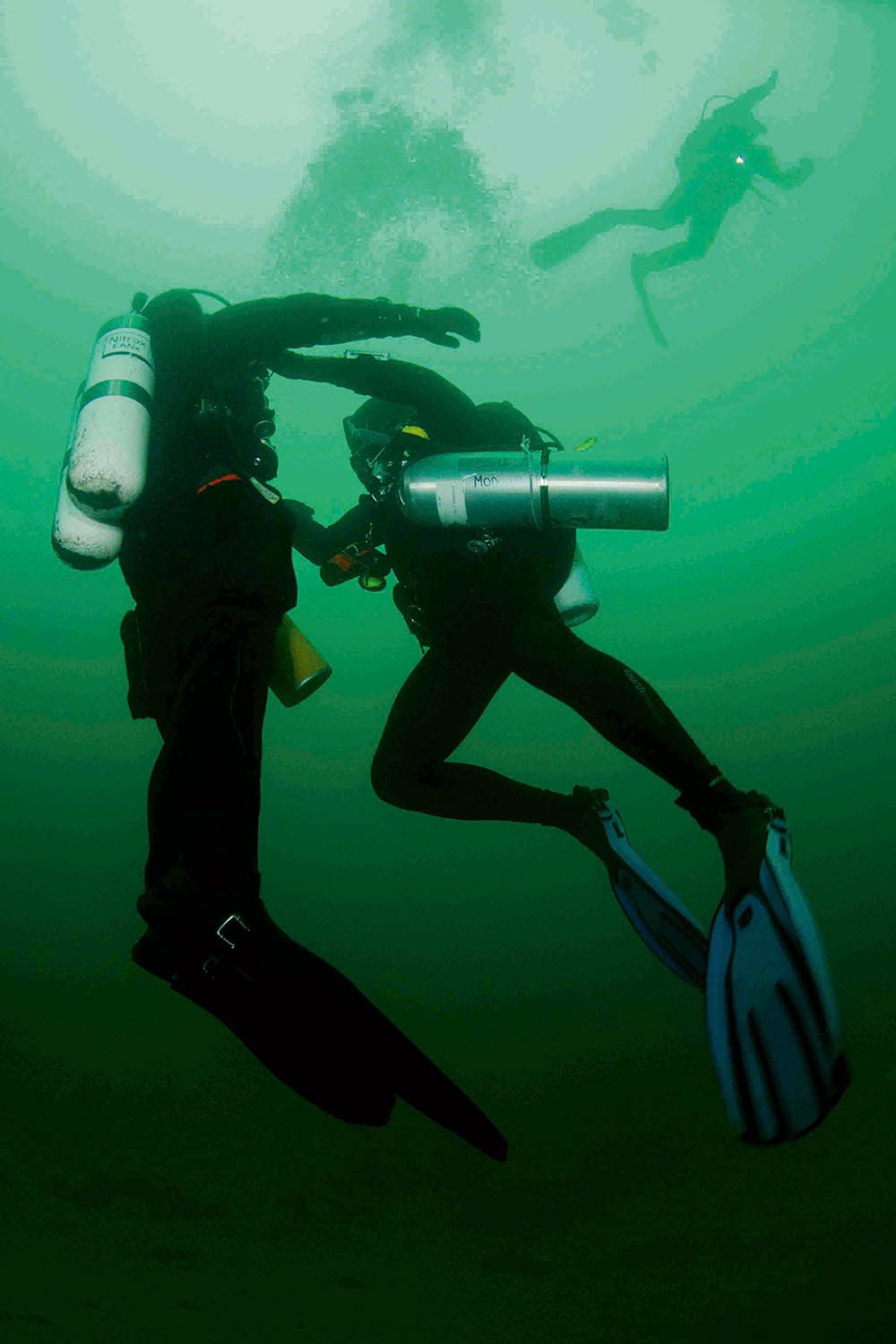 HOW IMPORTANT IS fitness for diving? Diving is actually a very relaxing sport, and in good conditions it requires very little effort and so very little fitness. However, there are times when it can require a lot of effort – swimming against a current, for example, or particularly when involved in a rescue. At these times, fitness becomes very important. 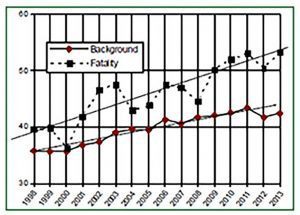 For any form of diving a good level of fitness gives a number of advantages, both for diving and in general.

Diving benefits include reductions in breathing rate, tiredness and fatigue, and in the risk of heart attack, injury, decompression illness (DCI) and death!

General benefits include reductions in risk of illness, injury and depression, as well as increased quality of life. Fitness helps with learning and can enable you to see your grandchildren grow up.

The importance of fitness and the impact of medical issues can be seen every year in the British Sub-Aqua Club (BSAC) Diving Incidents Report.

Every year a significant proportion of fatalities are attributed to “non-diving-related” medical incidents (for example, a heart attack) while in the water.

Equally, the majority of fatalities occur in divers aged over 50. Unless divers get less skilled or less cautious as they get older, it’s reasonable to assume that many of these incidents are health-related.

The proceedings of the DAN Recreational Diving Fatalities workshop also concluded that one of the major contributory factors in diving fatalities was “age/health”.

OF COURSE, you have to be careful when interpreting statistics. If the general background population of divers is getting older, we would also expect the average age of casualties to be increasing. 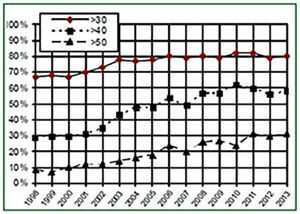 Figure 2 – Average age of the UK diving population (graphs and statistics re-used with permission of BSAC).

The database records (where known) the ages of all those involved in diving incidents: the subjects of the incidents, their buddies, rescuing divers and anyone else involved.

BSAC receives input from many sources but primarily from its members, so this can be used as a rough indication of the members’ average age.

The data clearly shows that the age of fatalities is indeed increasing, as is the background age.

We don’t have data for age-ranges in other organisations or for UK divers in general, so it’s impossible to tell if the general UK diving population is following the same increase in average age as the BSAC membership – but it’s reasonable to assume that some increase is occurring.

Of course, all this talk of demographics and populations is interesting to academics, but all you and I are really interested in is knowing our own risks.

To address this, the RNLI introduced a campaign aimed at getting divers to consider their own level of health and fitness. The RNLI invested in a number of health kiosks that divers could use to check this, the intention being to at least assess our own health and fitness and to seek medical advice if we have any issues.

These kiosks have been present at Dive Shows, dive-sites and dive-centres around the UK. They allow divers to find out if their weight, blood pressure or other factors are of concern, and whether they need to seek further advice.

The recent changes to the Health & Safety Executive (HSE) Diving at Work Medical (MA1) have generated a lot of discussion about fitness. The new guidelines define the acceptable limits for both BMI and VO2Max for instructors and other divers in an “at work” situation.

This applies to a North Sea saturation diver as well as to a recreational open-water scuba instructor or divemaster.

THE BMI GUIDELINES are that divers with a body-mass index of less than 30 are fit to dive. Those with a BMI equal to or over 35 are not fit to dive. 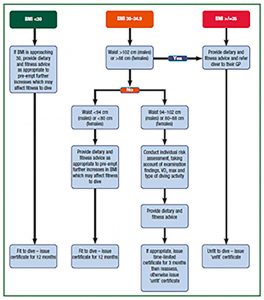 For divers with a BMI between 30 and 35, the HSE diving doctor has to perform an assessment based on waist size, examination findings, VO2Max and type of diving.

Based on this risk assessment the doctor may issue a fit-to-dive certificate for 12 months, a time-limited certificate for three months or an “unfit-to-dive” certificate.  This has generated a lot of discussion, because BMI might be a quick and easy measure to take, but it is not always a good indication of a person’s levels of health and fitness.

The second measure used by the HSE Diving At Work Medical is VO2Max,

a much less widely known concept than BMI. As people’s level of exercise intensity increases, the amount of oxygen that their body uses (VO2) will also increase. However, the amount of oxygen their body can take in and use reaches a maximum point – VO2Max – and this is regarded as a good representation of their overall level of fitness. The higher the VO2Max, the higher the fitness level.

To full test your VO2Max you would need to be on a stationary exercise bike or treadmill and hooked up to a machine that measures the exact amount of oxygen you’re breathing and using.

However, it is possible to estimate your VO2Max by using a simple step test, stepping on and off a low step at a gradually increasing pace while your heart-rate is noted.

THE HSE GUIDANCE STATES that a diver with a VO2Max equal to or greater than 45 can be issued with a fitness-to-dive certificate, while one with a VO2Max of less than 40 should be certified as “unfit”. 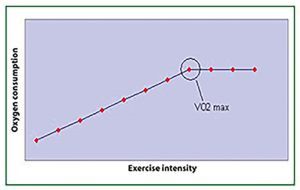 For those with a VO2Max between 40 and 45 the doctors should conduct an individual risk-assessment, taking account of other findings and type of diving activity.

Based on this assessment, they can then issue a three-month time-limited certificate or a full 12-month certificate restricted to specific diving activities, such as no-saturation diving or no diving below 50m.

There are two things to consider here. The first is that a VO2Max of 45 is a high level of fitness. It’s equivalent to running at 9mph (6 min/mile), cycle-racing, competition canoeing, sparring in a boxing ring or playing a competitive squash match.

The second is that, as shown in figure 6, VO2Max tends to vary with age and gender. So a score of 38 might be considered good for a male of 50-plus, but merely average for a 25-year-old male.

A VO2Max of 45, required for a pass on the HSE medical, is considered average fitness for an 18-year-old male but would be a good level for a 48-year-old male and excellent for a 52-year-old man.

The same passing level of VO2Max would be good for an 18-year-old female and would require an excellent level of fitness for any woman of 40 or older.

So is a VO2Max of 45 unrealistically high, and does it unfairly penalise older or female divers?

To answer the first question, I set up a rescue scenario with Tim Clements from the Vobster inland dive-site. We put a Suunto heart-rate monitor on the rescuer and filmed the whole thing.

The rescue started at a depth of 27m and the water was cold, with limited visibility. We simulated an unconscious diver rescue.

The casualty was wearing a twin-set and stage, while the rescuer was wearing a rebreather and a stage. Obviously, a single-cylinder configuration is likely to involve slightly less effort.

Even before the start of the rescue, before the rescuer had even found the casualty, his heart rate was 140bpm. This is psychological stress combined with the normal effort of diving and cold water.

As the rescuer found the casualty and got hold of him, his heart rate was already 167bpm.

The rescuer carried out a very well-controlled lift, but at this point his heart rate was still at 167bpm, gradually increasing to just over 170 bpm.

It’s worth noting that the rescuer and the casualty were both instructors and were chosen for their typical build.

We deliberately chose typical divers rather than super-fit individuals so that we could get a realistic impression of the effort required by the average instructor.

THE RESCUER THEN attracted attention and started the tow to shore. Once he started towing, the combination of psychological and now also physiological stress had pushed his heart rate up to 180bpm. 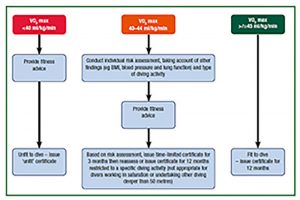 It’s worth looking at some of the details of the rescuer at this point. He was a 45-year-old male with a BMI of 31. A Chester step test had given an estimated VO2Max of 44. Under the HSE diving medical guidelines both the BMI and VO2Max put him in the borderline area, making him an ideal candidate for this test. In fact, he was issued with a diving medical but was excluded from saturation diving.

As the rescuer reached shore, his heart rate had been above 170bpm for three minutes and had been at 180bpm for over a minute and a half. During dekitting, the diver had to deal with the physical effort plus the mental stress of dekitting both himself and the casualty.

DESPITE THIS BEING a simulated event, he was under stress and at times became a little flustered. I think the stress of being filmed replaced some of the stress of a real rescue incident. 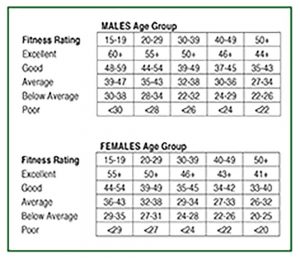 Though not the main point of the film or this article, this shows the importance of regularly practising rescue skills.

It is during dekitting and getting the diver out of the water that the rescuer reached his maximum heart rate, peaking at 186bpm. This is 106% of his maximum recommended heart rate, which corresponds to a VO2Max of just over 45  – exactly the level set out as a target in the HSE diving medical guidelines.

Once the rescuer got the casualty onto a firm surface, he started CPR. It was during CPR that his maximum heart rate of 186bpm was achieved. At this point it had been at or above 180bpm for 3.5min.

The fact that the rescue resulted in an estimated VO2Max of 45, exactly the number recommended by the HSE, was a surprise to all involved and shows that the HSE guidelines, while very high, are in fact representative of the effort involved in a rescue situation.

VO2Max is normally rated against the person’s age and gender, but the HSE guidelines make no allowance for this.

This is because it doesn’t matter who the rescuer is – what matters is the casualty. The same amount of effort would have been required to rescue this casualty if the rescuer has been an older female or a younger male.

The video of this rescue is freely available on the Internet for anyone to use, irrespective of agency. Find “Diver Rescue Film IANTD TDI” on YouTube.

Fitness is important both to increase the comfort and enjoyability of any dive but especially in case of emergency. Don’t underestimate the level of effort and fitness required to carry out a rescue.

It seems that the HSE guidelines, while not being perfect, are at least in the right ballpark.