Prolific Turkish wreck-hunter SELCUK KOLAY tells how he identified his latest discovery in the Aegean Sea – a steamship built in Britain after WW1, bought by the French, commandeered by the Germans in WW2 and sunk by a British submarine 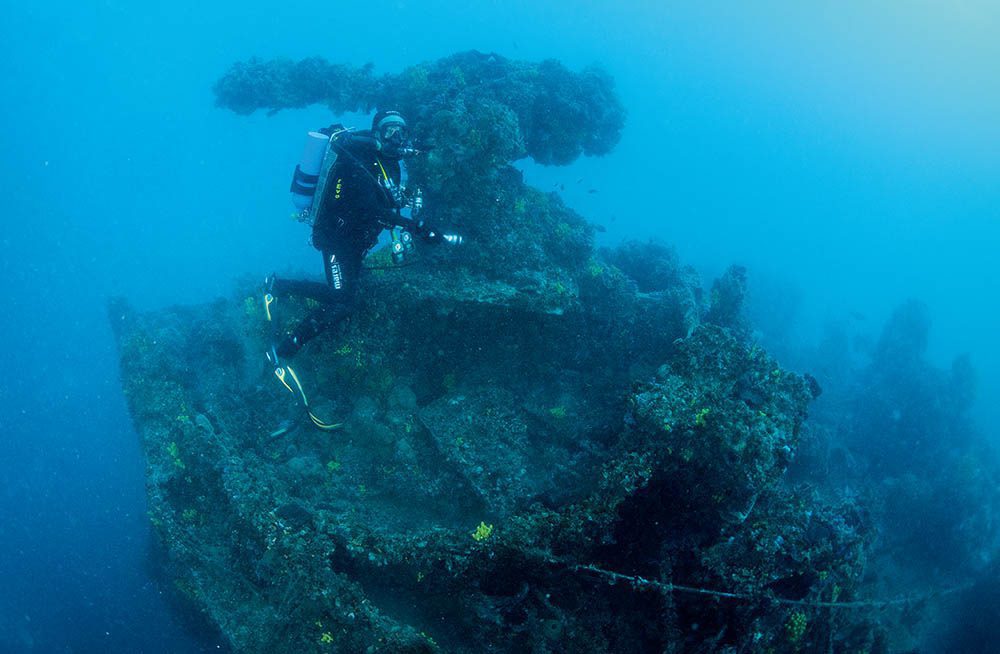 MY SONAR SCANNING of the waters around Bozcaada, aka Tenedos Island, near Turkey’s Dardanelles approaches, had already revealed the wrecks of the Greek steamer Eleni and the British submarine HMS Simoom.

But in early June last year another wreck showed up on my sidescan screen, upright in 52m on a sandy bottom, and it meant more detective work for me.

Not that I was complaining about having to sift through the archives, but in fact it was while discussing the case with Hamburg wreck-diver and researcher Dimitri Galon that the name ss Nantaise emerged as the most likely candidate.

Dimitri’s family comes from Tenedos, so he was very interested in joining other friends of ours to dive this and the other wrecks I had discovered off the island.

I learnt more about the Nantaise. The steamship was built just after WW1 by SP Austin & Son in Sunderland, for the Normandy Shipping Co Ltd of London. 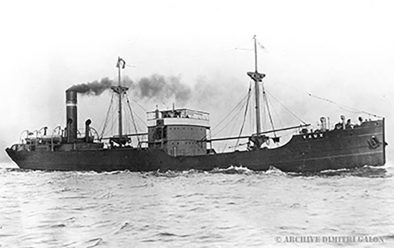 The Nantaise in her early day as the Vaux.

Launched as the Vaux and completed in March 1920, she was 79m long with an 11m beam and a triple-expansion steam engine.

She was renamed Nantaise after being bought by French company Fernand Bouet of Caen in 1925. Three years later she changed hands twice in a year, ending up with the Societe Navale Caennaise.

In June 1940 Nantaise was in the thick of WW2, and took part in the evacuation of the last French troops from Le Havre before falling into German hands at Bayonne. In February the following year she left for Casablanca in Morocco, where she was returned to the Vichy authorities to support the traffic between France and its North African colonies.

In January 1943 the Nantaise was seized by the German army in Marseille and, under the ownership of MMS, a company formed to handle all shipping captured or confiscated by the Reich in the Mediterranean, worked as a freighter for military transports.

On 7 August of the same year, Nantaise was steaming through the northern Aegean in convoy from Varna in Bulgaria to Piraeus in Greece with the French vessel Thisbe. They were being escorted by five German submarine-chasers, four R-boats and three Arado aircraft, with sub-chaser UJ-2104 commanded by Oberleutnant Nikolai von Ruckteschell leading the convoy.

This is when the Nantaise came under attack from Porpoise-class British submarine HMS Rorqual and sank, without loss of life, about nine nautical miles west of Tenedos.

MY BOAT WAS STILL at Tenedos harbour, so I decided that in advance of any group dives I would drop onto the wreck to see if it matched the descriptions I had of the Nantaise.

Long-time dive-buddy Kaya Yarar joined me for a quick tour of the wreck on air, and we did a little filming. It was a very nice day, with good visibility and no current at all. Average depth was 46m.

My impression from that dive was that the wreck could well be that of the Nantaise, but we needed more time under water to check on the details to be sure.

We fixed a date for late September, thinking it would be a great opportunity for underwater film-maker Savas Karakas and his team to produce another documentary for IZ TV.

We planned the gas-mixes to be used by both the open-circuit and rebreather divers in the group: 18/45 as the bottom and travel mix and 18/45 plus nitrox 50 for the sidemount cylinders.

We would use my research and diving trawler Milonga, and divemaster Metin Eron’s dive-boat Yunus Emre 5.

There is a frequent ferry service between the Turkish mainland and Tenedos, so when the time came it was no problem to transport the heavy equipment, including 50-litre tri-mix and oxygen cylinders, in our cars.

We had booked the Hotel Akvaryum on the island’s south coast. It’s run by Deniz and Berna Pak, who are wonderful hosts, and we were able to set up our booster pumps and compressors in the hotel garden. While the others were busy with their preparations, I decided to go out on my boat to mark and dive the Nantaise again, as well as marking some of the other wrecks the group wanted to visit.

Using rebreathers, I dived with Ali E Keskin, a well-known Turkish underwater photographer. Again it was a beautiful day, with no current and almost 15m visibility! By now I had really done my homework on the Nantaise, and felt well-equipped to make a positive ID.

18.25 hours, identified the targets as a convoy made up of two merchant vessels of about 2500 tons escorted by three AS trawlers and two E-boats. Two aircraft were also seen patrolling overhead. Started attack.

19.20 hours, no counter-attack whatsoever having developed, came to periscope depth. Target stopped; as I was in the centre of a semi-circle of six AS vessels (an armed yacht having appeared), I decided against firing a further torpedo and withdrew. Six depth-charges were dropped over a long period, none near.

20.50 hours, periscope depth; the damaged ship had disappeared and I do not think she could have possibly have steamed or been towed away. Only an AS vessel was in sight, far to the southward.

OUR SHOTLINE HAD LANDED next to the bow. We started finning just above the wreck, along the starboard side all the way past the bridge to the stern, looking for the very specific structures of the mast and the gunwale.

There was one gun on the forecastle and one at the stern by the auxiliary rudder-room. The funnel was missing but the propeller and rudder were in place. Though dislodged, both masts remained upright. 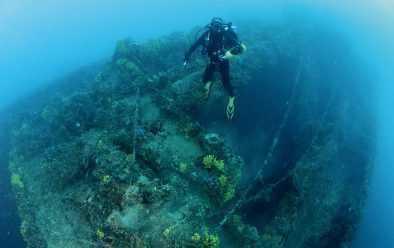 The holds were empty, with only a few oil-barrels lying around. This was another clue. Nantaise was carrying timber, which was why she had remained afloat for about an hour after the torpedo struck, and why there was no cargo in the holds.

Part of the cargo floating at the surface had been picked up by the Germans and landed at Moudros on Lemnos Island.

I’m not sure if any early salvage work was carried out, but everything else seemed to be untouched.

Measuring the beam again yielded the expected dimensions. Swimming back to the shotline along the port side, we could easily see the major torpedo damage on the starboard hull of hold 1 – exactly as described in the HMS Rorqual report.

Watching our footage at the hotel later gave us enough reason to celebrate during happy hour the positive identification of the wreck.

Further dives were carried out on the Nantaise and other wrecks by all the divers in the following days, though the weather conditions and visibility were no longer excellent by any means.

The group plan to reconvene this September to dive the wreck of the Turkish cruiser Midilli (originally the Breslau), which I discovered back in 1993 near the Dardanelles approaches – to commemorate the 100th anniversary of her sinking.