DAN BURTON is a seasoned diver and acclaimed underwater photographer, yet three of the most iconic shark species had always eluded him. It took one day in the Red Sea to fix that 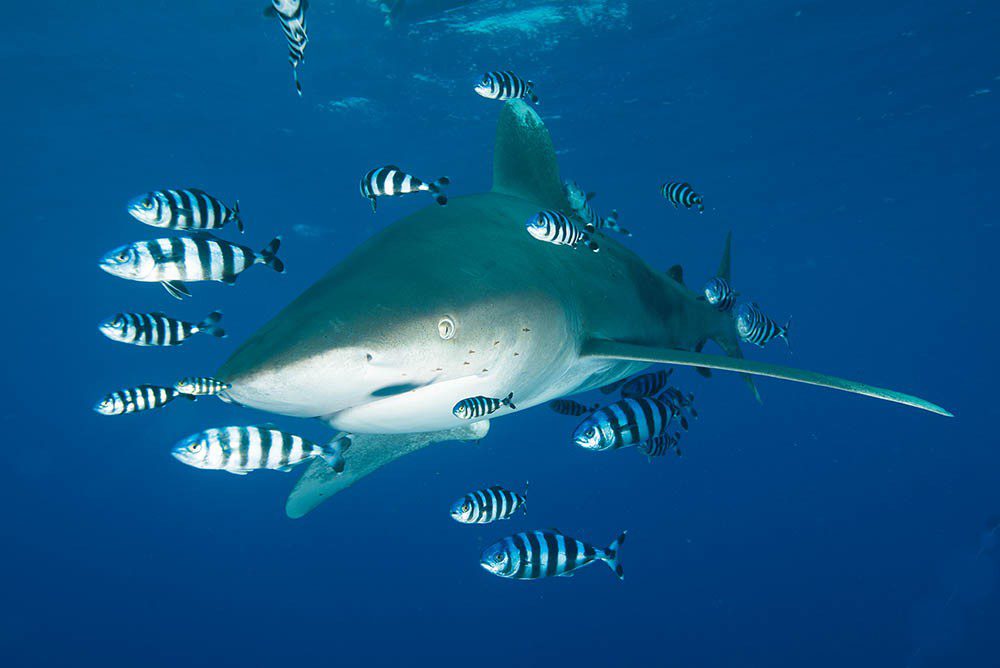 Oceanic whitetip shark with attendant pilotfish at the Brothers.

AFTER 30 YEARS OF DIVING in the Red Sea, I realised that there was one area that, although very well-known, unaccountably I hadn’t visited. So this spring I joined a group of divers aboard the liveaboard Hurricane from the Tornado Fleet, on one of its southern adventures to the pristine reefs at the Brothers, Daedalus. and Elphinstone.

It was a Hurricane Shark Quest week, and with Diver’s Sharks & Rays special edition in mind, I travelled in hope of finding suitable content.

The remote eco-systems on the itinerary are situated in the middle of the Red Sea, making them perfect sites for finding sharks and other large pelagic species.

We left Port Ghalib and headed north to the two barren Brother Islands, arriving at 6 am. I was feeling excited about the week’s diving because, apart from never having visited these sites, I had never dived with three of the sharks to be found there –oceanic whitetips, hammerheads and threshers.

I was worried only about the possibility of not seeing any sharks, having witnessed the decline in populations of various shark species since I first visited the Red Sea.

Our guide Yasser gave us a detailed briefing. We would have three ways of conducting the dive, and these depended on the current.

The final decision would be made only after he had assessed the reef just before the dive-team entered the water. At that point we went for plan A, and decided to dive Little Brother from the north end.

With precision backward rolling from the pair of RIBs, the two groups entered the deep blue water to make a negative drop to the wall, where we congregated at 20m. The current whisked us briskly south, so we weren’t really able to stop on the wall to take pictures.

Yasser clanged his tank and pointed out into the open blue. Staring down to 25m below me, I could see the faint shape of a hammerhead shark – an exciting moment, if a brief one.

The giant swam off into the shadows, swaying from side to side and tilting its head upwards occasionally in an apparent effort to keep an eye on us.

We drifted on to the end of the reef, where the current softened. Above, we could see the mooring line tied off to the reef in the lee of the southern end of the island.

SUDDENLY, THERE WAS a further clanging of a tank. Annette, our other guide, pointed ahead. In the distance

I could see another shark, and this time the long tail indicated that it could only be a sleek thresher. Again the sighting was brief, but it was thrilling to see.

It was about time to head back to the boat, but we had been told there was a good chance to see the iconic oceanic whitetip shark too. And, almost on cue, the first of that species appeared from out of the blue – the third shark on my long-held wish-list!

A few minutes later, two more arrived. Shortly after that a larger shark turned up with a full complement of pilotfish. This was the one I really wanted to photograph.

I sat there motionless at about 10m, set my camera to manual shutter and aperture to give a nice deep-blue background, and set my flash to manual half-power, creating this lighting so that I could shoot from about 1-1.5m away. This would, in theory, fill the frame and give me the shot I wanted.

After a short wait the first shark came to within 1m of me, though with only a few of the pilotfish that make such pictures so viewable.

I sat patiently and enjoyed four passes from the other shark, but the one I most wanted as my model was keeping its distance. After 20 minutes I had average results, but not the shot I wanted.

AFTER OUR THREE MEMORABLE dives in the south, Hurricane lifted anchors and headed north to Big Brother, just half an hour away. The crew reset the anchors for the night, while the divers reviewed a great day of diving.

I popped my head out of the saloon at 5.50 the following morning to be greeted by the sight of a flotilla of safari boats around us. 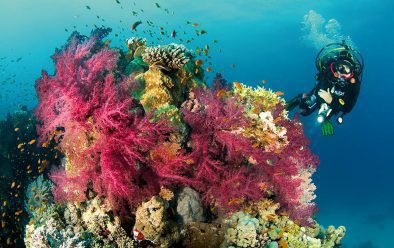 Liveaboards from Hurghada and Port Ghalib had caught up with us. I hadn’t expected to see so many, but we had to be grateful to have had Little Brother to ourselves on the previous days.

The plan was to dive the most northerly part of the island and check out the Numidia, the Scottish steamship that lies at depths between 8 and 80m. The RIBs headed off through the choppy seas to the drop zone, just on the edge of the drop-off.

We entered the water like a team of synchronised parachutists, and reassembled at 15m.

The current took us west along the reef and onto the wreckage at 20m.

I met up with Yasser and we hid away from the flow in the lee of the wreck. We then dropped to 37m to take a few shots of the superstructure with its vast covering of pink soft corals.

The wreck started to become extremely crowded as more and more divers arrived – the site was soon all bubbles and fins and I had soon had enough, so we moved to a different, shallower part of the wreck, where Yasser showed me a great area inside to photograph.

Our computers started to bleep, and with light kicks of our fins the divers slowly drifted away from the wreck and were taken back onto the main reef.

In a few minutes we had arrived at the western side of the island. It was after 11am, and the sun started to brighten up the wall, bringing it alive. We drifted past colourful schooling anthias as they danced over the dappled coral-head.

I had been told that there were some small caves and caverns along this site, so I quickly scouted them out as we moved into the shallows.

To ensure a great shot of any cave or overhang I always bring a torch for my dive-model. Yasser positioned himself in the entrance and I slipped to the back so that I could get a silhouette of him entering the cave with a beam of lights, surrounded by a garden of soft corals and seafans.

As the dive drew to an end, one of the team spotted a thresher out in the blue. The 2.5m shark patrolled along the outer reef, keeping a safe distance from us before drifting back and melting into the murky grey background, but the brief encounter left us mesmerised.

IT WAS TIME for the long 11-hour transfer to Daedalus, famous for the strong currents that make it a good place for spotting hammerheads. The best place to see them there is on the northernmost plateau.

We kitted extra early at 5.30am and speedily left for the northern reef before any other boat could have a chance to follow us. After a current check, everybody dropped to 25m and waited.

Visibility was exceptional, making it possible for us to see the steeply dropping seabed at 60-70m below us.

On the reef, pipework was strewn all over the slope. The site had hardly been explored, so it could be that it contains an interesting wreck to explore on future trips. The guides say that much of the main hull lies beyond 100m, and this location is also subject to strong tides and down-currents. 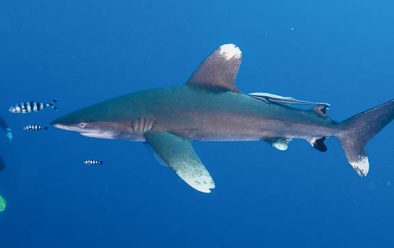 The group hovered motionless in the blue, waited patiently until finally our first hammerhead appeared, 15m below us. The 2m shark turned its head 45° to eye the intruders in its hunting ground, then thrashed its tail and disappeared back into the grey depths.

We made our way up the reef and followed it around, coming across another shark, but both kept their distance. That might have been disheartening for me, but the big positive was that we had seen sharks in numbers on every dive since the beginning of this shark-dedicated trip.

Those dives extended to the hours of darkness, too. On the second night at Daedalus we noticed a large group of silky sharks congregating under the boat to intercept any scraps of food from the evening meal being thrown overboard.

A number of guests got out selfie sticks and improvised broomsticks to film the sharks at the rear dive-deck. This was highly entertaining, as we had up to four 2m sharks thrashing around under the boat. I was tempted to get into the water, but not sure if I would have ever get back out again!

The final part of this grand tour was a visit to Elphinstone. After the overnight crossing, it was difficult to moor in the windy, choppy conditions, and we managed to get in only one dive, at the northernmost plateau.

The current was strong, making it difficult to stay in one place. Below us a few grey reef, whitetip and blacktip sharks patrolled the rocky peninsula.

We spent just 10 minutes at 35-38m, continuously kicking just to stay in one spot, but it was certainly rewarding to see these amazing sleek creatures. I just wished I had brought my rebreather!

WE DECIDED TO STOP over instead at Marsa Shorna, a shallow sandy reef near Port Ghalib known as a good spot to see dugongs. None of us saw one under water, unfortunately, though we did see one surface in the distance.

Just as the boat was ready to go, a school of common dolphins swam by. Some of the group launched themselves into the murky waters and so spent the last 20 minutes of the trip snorkelling with this friendly school as they dived

and twisted below, squeaking and clicking. What a finale to an amazing week of diving!

I’d had the pleasure to be one of the first divers on Hurricane after a four-month refit, and the vessel did look superb. I thoroughly enjoyed my Hurricane experience. The crew was welcoming and I felt part of the family.

THE LIVEABOARD is just one of the five in the Tornado fleet, which celebrates its 30th anniversary next year and seems to go from strength to strength. Another vessel is currently being built for the occasion, and I look forward to seeing what’s next to hit the high seas.

These Shark Quest trips are not suitable for beginners but aimed at advanced divers. They are perfect for snappers who enjoy wide-angle photography, because most of the diving is on walls and in strong currents.

And this one yielded far more than I had expected in terms of sharks encounters, even though others who had been on the trip described it as an average week.

I can live with that sort of “average”!

GETTING THERE> Flights from UK to Marsa Alam, road transfer to Port Ghalib.

DIVING & ACCOMMODATION> Hurricane is 36m long, has 11 cabins and has been voted DIVER Liveaboard of the Year five times, including 2017, tornadomarinefleet.com