SHERWOOD IS A BRAND THAT always seems to be playing catch-up. Which is a shame, because the line was founded by an engineering company that has built industrial gas-control systems since the 1930s, and this has given Sherwood the expertise to develop some very innovative scuba regulator models over the years.

Its unique dry-bleed first stage enabled the piston to sense pressure changes while surrounded by air, not water as was usual, protecting it completely from contaminants such as salt deposits and sand. At the time, this was a real advance in piston first-stage design.

Isolating the simple and inexpensive mechanism afforded the level of protection then associated only with far more expensive and complicated diaphragm-type first stages.

Another Sherwood first was to have heat-retaining vanes near the mouthpiece. These captured the warmth from the diver’s exhalations to warm the second stage to prevent freezing on ice dives. For warmwater use, similar vanes condensed and returned moisture to the diver to mitigate dehydration.

Sherwood made under-the-arm regs for streamlined hose-routeing and joined forces with Poseidon to offer a joint high-performance side-exhaust model.

Today Sherwood offers only a limited product range and, although it doesn’t affect the equipment’s performance, the official website is both uninformative and needs spell-checking, which further undermines the brand.

In the UK, Sherwood has had a succession of distributors over the decades, none of which seem to have really made a success of a line that deserved to do better.

Following an industry shake-up, the brand has passed to the former UK distributor of Oceanic, now called Fathom Outdoors. With its track record, perhaps it will be the one to turn Sherwood’s fortunes around.

The Brut Pro is Sherwood’s entry-level regulator. It meets CE standard EN250A, meaning that its ease of breathing is certified for diving to 50m, where it should also be able to support a second diver breathing hard from a matched octopus.

It’s not certified for diving in water cooler than 10°C, however. The reg is compatible with 40% nitrox out of the box.

The time-proven balanced-piston design can be expected to provide high flow-rates with little effort at recreational depths, and with minimal difference in inhalation performance between starting and near-empty tank pressures.

Most manufacturers’ entry-level first stages are unbalanced, so are cheaper to make, but are more prone to greater breathing effort, especially under high demand, such as when working hard, diving deep or tandem-breathing with another diver using the octopus. 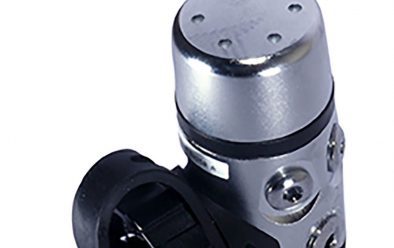 The first stage has four mp and two hp ports.

The first-stage mechanism is dry-sealed, so no water enters the spring chamber. This feature should reduce servicing costs by protecting O-rings, piston and spring from water-borne contaminants.

I would also have expected it to prevent icing, so I’m a little surprised that the Brut Pro isn’t coldwater-rated.

The first stage has four outlets for medium-pressure accessories such as direct feeds and safe seconds (octopuses). Although these ports are not fitted on a swivel turret, I had no problems routeing my hoses (I had three mp hoses feeding primary and octopus second stages and my BC direct feed).

There are two high-pressure ports for a pressure gauge and/or a transmitter, mounted on the left and right sides.

Fathom provides the Brut Pro with a 300bar DIN fitting only, so a screw-on yoke adapter might be needed if you travel.

When I had a dive shop, all the regulators I sold had balanced-piston first stages in the hope that they would support an octopus if it was ever needed (there was no EN250A standard for guidance back then) and we sold them only with a 300bar DIN fitting and included a yoke adapter.

Most experienced divers recognise the safety benefits of DIN over yoke, so Sherwood was pressing all the right buttons with me.

The second stage is pneumatically balanced, a feature until recently normally associated with premium-priced regulators, not entry-level models.

The advantage is reduced cracking effort, the effort demanded of your lungs to “open” the second-stage valve to start the air flowing.

As when trying to open a fire-door against its spring, most second stages, including the Brut Pro, have a door-like valve held closed by a spring. Without it your regulator would freeflow, and most of the air would be wasted.

In a non-balanced second stage, the spring must be comparatively strong to hold back the incoming air from the first stage.

Because air-pressure from the first stage increases in line with increasing depth, the spring must be strong enough to prevent a freeflow even on deep dives, but it’s stronger than it needs to be at shallow depths.

A pneumatically balanced second stage is more refined. The spring is contained in a tube that fills with pressurised air, which helps it to close the valve by also pressing on the valve to keep it shut. 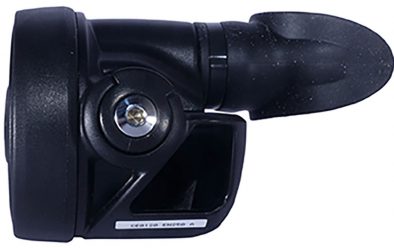 The second stage is light and has a comfortable mouthpiece.

While the steel spring in a second stage has a fixed strength, and so exerts a constant closing force, in the Brut Pro the air pressure varies with depth changes. In effect, it works with the spring, supplementing its closing force as you go deeper and slackening off as you return to the shallows – hence the term “balanced” second stage.

This means that a lighter spring that needs less effort to crack can be used, making inhalation easier. The effort needed to crack the valve is much the same at any depth.

Once the valve has been cracked on each inhalation, you don’t want to exert a lot of energy keeping the air flowing.

On an hour’s dive you might take 1200 breaths, so sucking air out of your tank could start to feel like extracting a McDonald’s shake through a thin straw.

To keep the air flowing with the least effort on your part, a venturi takes over – the flowing air is routed through the second stage to create a vacuum that keeps the diaphragm depressed and the second-stage valve open for you.

When a train flies by and you feel the air behind it tug at you, that’s the venturi effect.

It’s usual for even a basic second stage to have an on/off control for the venturi, to prevent freeflows when it isn’t in your mouth, such as when surface-swimming or chatting at the surface. It’s also used to prevent octopuses purging unintentionally. 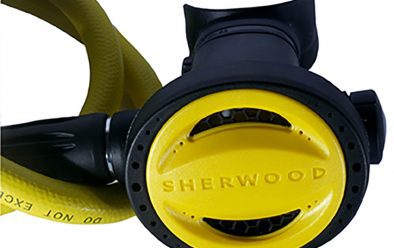 The Brut Pro lacks this switch, and I think that’s commendable. Here’s why. When you turn off the venturi, you make breathing harder. So when divers forget to turn the switch to the dive position, or don’t even know that they should, carbon dioxide headaches can result.

When an octopus is set this way, there’s anecdotal evidence to suggest that the breathing resistance can send an already stressed out-of-air diver into a panic and cause the reg to be abandoned altogether.

Sherwood has eliminated the chance of any such confusion as well as reducing production costs.

On Sherwood’s website, some pictures of the Brut Pro do show the second stage as being fitted with a venturi switch, however. Go figure.

I used the Brut Pro on a recent trip to the Maldives. I’m used to swift currents there, but on this trip we hit them only once. With a 30m limit, I and the Brut Pro got a fair work-out, though I’d have liked to have tried it deeper.

All regulators have their own breathing characteristics, and evaluating and reporting on them is highly subjective.

I never felt air-starved using the Brut Pro, but I did feel that I was making more effort to inhale than I might have expected, given the balanced first and second stages.

That said, breathing resistance seemed uniform and smooth regardless of workload.

When I tested the octopus at 30m with Christoph of Aquaholics breathing as hard as he could in time to my own inhalations, I could not detect any decline in performance whatsoever.

Even sharing, Christoph thought the Brut Pro compared very favourably to his own top-of-the-line reg, which surprised me a little, until he let on that he had detuned it to save air!

The second stage is lightweight and the mouthpiece comfortable on long dives. The exhaust T does a good job of diverting bubbles away from the user’s field of view. It’s low-enough profile that I had no problems getting my mask up to my camera viewfinder. The purge is easily pressed with gloved hands.

I like to test how easy it is to clear a flooded second stage that’s inverted, because in a sharing situation it’s easy to insert regs, other than side-exhaust models, upside-down by accident.

The Brut Pro was a little harder to clear consistently than my own regulator. I retested this several times, because sometimes it cleared perfectly but at other times I’d have to breathe past a few dregs of water.

Once cleared, it doesn’t leak – some second stages I’ve tried continue to flood until turned the right way up.

The combination of balanced first and second stages and octopus performance is creditable in an entry-level regulator. I liked the omission of a venturi control and the inclusion of the 300bar cylinder connection.

I’m used to premium-performance regulators, which breathe a little easier – or, at least, breathe differently, giving that impression – but in fairness I’m comparing to regulators costing 50% more.

I did make the Brut Pro work hard, and it never left me out of breath.

The Sherwood Brut Pro is an OK budget regulator. It’s inexpensive and could be a good choice for someone wanting to keep costs down, or dive-schools wanting the performance benefits of the balanced first stage for a low outlay.

In its price bracket it has to compete with more familiar brands that also offer balanced first and second stages and the security of long-standing distributors.

Sherwood’s Achilles heel may prove to be its track record of speed-dating suppliers in the UK. It is the resulting anonymity of the brand that Fathom Outdoors now has to overcome.