It’s one of the planet’s greatest annual diving events, though you have only an outline idea of where to go and when to be there each day. It’s well worth the uncertainty, says EDOARDO SPACCA 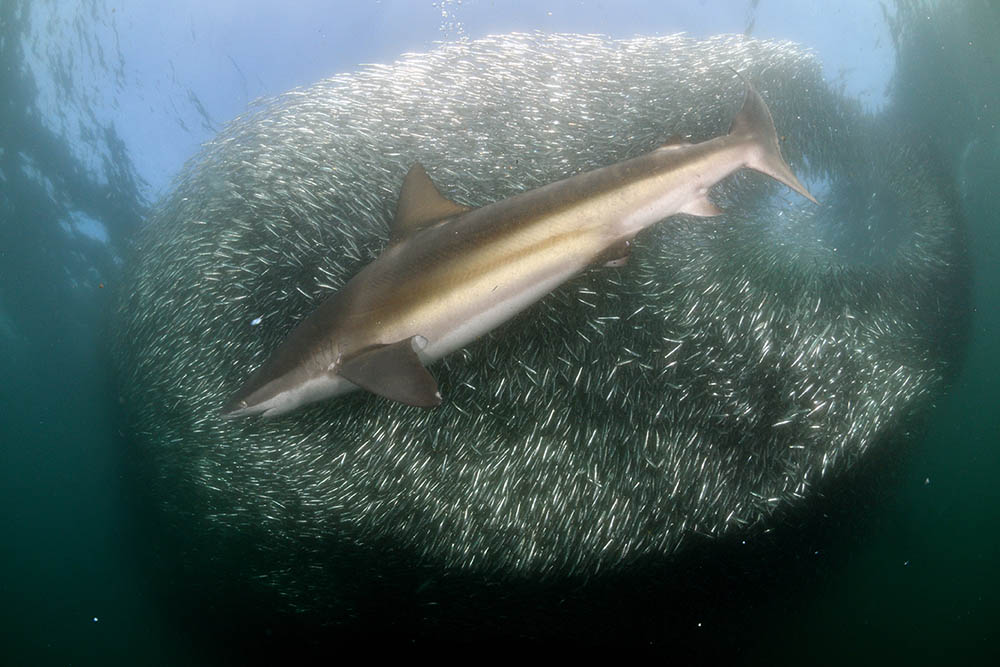 An oceanic blacktip shark in action south of Port St Johns around the end of July. This was a medium-sized stable bait-ball, with more than 100 sharks in attendance – the number was calculated using an aerial photograph taken from a Microlight.

SOUTH AFRICA’S Sardine Run is one of the most spectacular and addictive annual shows Nature puts on for us. It’s a run for life and the survival of the species, to be or not to be.

It’s an enduring and determined effort on the part of the sardines (Sardinops sagax) to migrate from the Agulhas Bank, in the southern waters of the Cape, to the coastal area off Durban, all the way north in KwaZulu-Natal.

During their odyssey they are confronted by a sea of troubles, in the form of all sorts of predators – from many kinds of shark, dolphin, orca and whale to tuna and other game fish, birds, seals and whatever else counts sardines in their diet, including of course humans.

Hundreds of millions of sardines, forming a long river through the inshore coastal areas, engage in a journey on which they have no friends, and where the only rare living creatures that don’t want to eat them alive – that is, humans with cameras – are there hoping to witness a massacre at first hand.

The sardines prefer cold waters, so follow the cooler current that runs shallower and closer to the coast. This allows for easy detection by the army of predators (including humans), which for the rest of the year

do not have that many feeding opportunities.

Normally it’s the common dolphins that do the leg-work for the other predators. They dive down where the river of sardines flows, and by breaking it up with co-ordinated attacks, also using bubble-netting, push the sardines towards the surface.

They’re trapped there and, as a defence mechanism, stick together by forming baitballs, having more chance of survival as a group.

However, in this way they also become easier prey for all the other predators, which basically free-ride on the dolphins’ work.

Sharks, dolphins, birds and tuna all go at it, taking turns, and the fun starts when you, the diver, are in the middle of it.

THIS INCREDIBLE MIGRATION starts every year in the South African summer (February-March) and ends during the second half of winter (July-August).

It can be accessed through operators based mainly in two locations of the primitive and rough Wild Coast in the Eastern Cape Province: Port Elisabeth, from late March to mid-May, and some 370 miles north in the area between Port St Johns and the Mbotyi river, in June and July.

At the end of July the survivors reach the coast around Durban and, after spawning, disappear into deeper and cooler waters, to undertake the far less perilous trip back to the Agulhas Bank. There they rest and start all over again the following year.

The reasons for their journey are debatable, one way of saying that we don’t really know much about what lies behind this phenomenon.

For the visiting diver this hardly matters – we just count our blessings to be able to witness the show live and fall in love with it.

Every morning I would wake thinking that today the genie of the Run would take me inside a real-life action movie.

At first, however, everything seems intimidating. The Wild Coast in winter and the idea of the chilly air and waters, the powerful Indian Ocean and the vast magnificence of the surroundings can overwhelm. Then the sheer adventure kicks in and carries you away.

I have been to the Run twice now, and after the first time wondered why I’d waited so long. The mouth of the Mbotyi where I stayed on both occasions is a lost paradise, at the end of 18 miles of dirty track that suddenly opens onto the infinity of the ocean. The white sandy beachfront and the views are inspirational.

African Watersports has organised operations for the Sardine Run since 1998, and over the years Walter Bernardis, its “Chief Pirate”, has seen every spectacle the Run can produce.

His operation, not unlike others in the region, uses 8.5m twin-engined RIBs producing at least 180hp. Every morning these launch with a reserve of 200 litres of petrol, to allow for the long distances often required in chasing the action.

The Sardine Run is no typical diving holiday, where you select a site and go dive. Here, your dive-sites cover 50 miles of Wild Coast, six miles or more out into the ocean.

Winds permitting, a Microlight aircraft roams above, seeking shoals and radioing in promising co-ordinates. The hotspot can of course be anywhere in those 300sq miles. 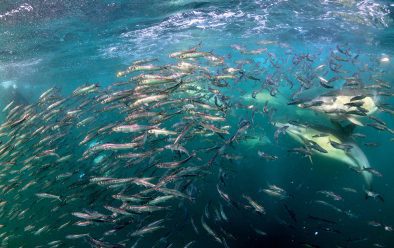 Long- beak common dolphins get among the sardines.

The essence of the action lies with the bait-balls, which offer unmatched adrenaline-filled hunting action. There are two kinds, depending on which sardines (or at times mackerel) compose them.

Moving bait-balls can shift quite fast. Dolphins fly all around you to attack the fleeing fish, which often seek refuge in the shadows of the divers witnessing the hunt. And if it’s not dolphins it could be sharks, in which case you don’t really

wish to be taken for refuge; the feeding frenzy could become such that you really don’t want to find yourself right in the middle of it.

Stable bait-balls, on the other hand, occur when the fish are trapped and revolve on themselves. They’re going nowhere because they don’t know which way to go, what with predators arriving from everywhere, including from the air above – the most daring birds such as gannets can plunge to 20m or deeper.

This is when you can finally put your tank on, sit back at a reasonable distance, and just watch in a state of bliss Nature unfolding in front of your eyes and lenses.

And if it is your day, you might even witness a Bryde’s whale arriving and closing the show by taking all.

I’ve been lucky on both years I went – the second time this year – and although no Bryde’s whales marched through my bait-balls I did witness several stable ones featuring both dolphins and sharks.

The former are organised and determined hunters, both attacking in groups and taking turns, with some going for the catch while the others continue to scare the sardines from the same position.

I noticed that at least one or two would check me out regularly, just to ensure that I was not a danger or a nuisance. Luckily, they didn’t mind me taking their pictures.

THE SHARKS ATTACK in a more individualistic way, though they also take turns unless there is a bigger one present that decides on the turns.

I have been on baited dives in open sea, with dozens of sharks all excited by the bait and, though aware of my surroundings, always felt at ease. 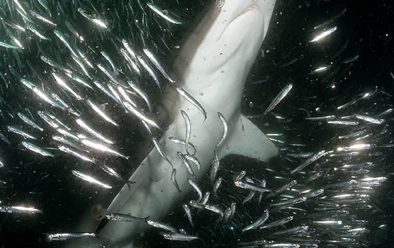 A shark pops out of a baitball at around 5m. For photographers, the moment the sardines start to swim in the same direction is the moment to shoot.

But a real feeding frenzy, in which the sharks dip into the ball open-mouthed and gobble as much as they can, is very different. You learn to realise when discretion takes precedence over photography, such as whenever I felt some blacktips or copper sharks coming a wee bit too close and slapping my legs. I would assume that was the shark saying “move!”, and of course I always obliged.

The Run is not all about panicked bait-balls, and dramatic hunting. There are many sideshows within the main show as, for instance, when the surface filled with leaping dolphins from a mega-pod of thousands of individuals, flashing through the waters as if on a mission to save the world and disappearing over the horizon, as we stood watching during an exhilarating hour spent following them.

Then there are the humpback whales, which proceed with their migration on exactly the same route at the same time, though they continue further north, up to Mozambique and beyond.

Although they use the same current corridor as the sardines, they are not concerned with them. Often these are family pods, and once we were able to spot a pod of as many as 11 whales.

The sheer numbers travelling at once make it possible to witness social behaviours, such as when we jumped into the water to hang around four whales that were flapping their tales and fins at the surface in what looked to us like a dance of pure happiness.

DURING THE VERY LAST HOUR of this year’s Run, I discovered just how much they are in charge of every part of their body, and to what extent they might actually pity us silly little humans.

We were trying to catch the last opportunity for a whale portrait, following a 14m mama with her calf.

The female seemed curious about us.

I headed in her direction with my eye stuck on the viewfinder, and then realised that she was just below me, centimetres away in fact, and clearly could not believe I had not seen her and kept my direction.

The next moment she must have made a conscious effort not to crash her tail onto my back. The look she gave me said it all.

It was the same expression as that of my mother when, aged 12 or so, I had launched myself at full speed on my bicycle down a whole flight of stairs.