Scientists know next to nothing about how whale sharks reproduce. A recent expedition to Galapagos hoped to take a step closer to solving this puzzle. MELISSA HOBSON talks to the team; pictures by Dr SIMON J PIERCE 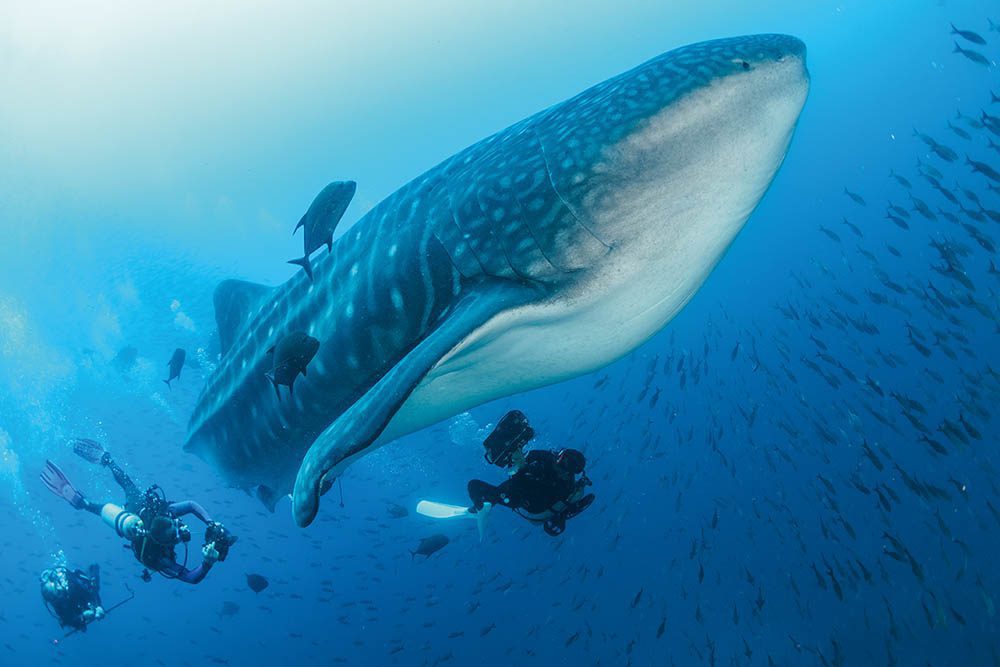 The scientific team move in on a whale shark, each with a specific task to perform.

PICTURE IT – you’re cruising through the blue waters of the Galapagos, after spending 36 hours on a tiny boat to reach the remote Darwin Arch. And now before you is what you came to see, an enormous shape emerging from the deep – an adult whale shark.

At well over 10m long, this female must surely be the biggest creature to have shared the water with you.

Or perhaps not, you think, as another “mega-mama” cruises into view, this one even bigger than the first.

As you brace yourself against the current, a diver approaches the shark clutching a large metal briefcase, like some kind of futuristic underwater commuter.

You blink. The diver zooms effortlessly through the water alongside the shark. Looking more closely to see how he’s able to move so quickly, you notice that he is propelled by a jet-pack.

It might come across as something from a sci-fi movie, but had you been in the Galapagos last year you might have seen just this sight. For two weeks in September, a team of experts were using cutting-edge technology to find out more about whale-shark reproduction.

Until this point, we knew pretty much nothing about how whale sharks breed. No-one has ever seen a whale shark give birth. Ever. And only one pregnant female has been physically examined.

Incredibly, she had more than 300 eggs and tiny pups inside her – twice as many as any other shark species.

Since then – and that was in 1995 – nothing. Researchers have had lots of questions and few answers.

Where could they find the clues to solve this mystery? The Galapagos promised to hold the key. It’s one of the few places in the world where adult female whale sharks nine to 14m long are regularly seen.

Jonathan R Green, founder of the Galapagos Whale Shark Project and leader of the expedition, thought the presence of these females presented an opportunity to learn more. Could they solve the mystery?

The expedition scientists dived the same site three times a day, yet each day was different, according to Dr Simon J Pierce, co-founder of the Marine Megafauna Foundation. “Conditions are really variable, so you never know quite what you’re going to get,” he told me.

“One day you can have 26° blue water with stunning visibility, no current and sharks everywhere. The next, the temperature could have dropped to 21°, with a current so strong that you have to hide behind rocks for shelter. I’ve watched hammerheads swim past me sideways because of the current!” 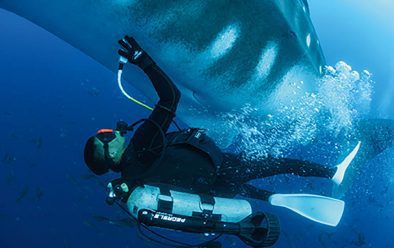 What’s more, there are a lot of sharks. Scalloped hammerheads, silky, Galapagos and, of course, whale sharks.

Being surrounded by so many sharks is refreshing for Pierce because, elsewhere in the world, sharks have been overfished so much that it’s rare to see one at all.

Around Darwin Arch and neighbouring Wolf Island, the waters have an average of 17.5 tonnes of fish per hectare: “It’s the highest biomass of reef fish recorded anywhere, and most of these fish are sharks,” he says.

“You’ll see enormous schools of fish coming through, especially jack and huge yellowfin tuna which, for some reason, all the fish are terrified of. I’ve never done a dive there and not seen at least one hammerhead.”

There are several reasons for the Galapagos being so “sharktastic”, as Pierce puts it. Upwellings of deepwater plankton make it rich in food for plankton-feeders (although whale sharks don’t seem to be feeding there) and the fish, in turn, attract the sharks that come to feed on them.

The seafloor around Darwin is made up of magnetic rings from previous volcanic eruptions, and these align either

with the Earth’s current polarity or its opposite. This is because minerals within volcanic lava align themselves with the Earth’s magnetic field, which reverses itself roughly every 500,000 years.

They also “record” irregularities in this magnetic field, so each ring has its own unique magnetic fingerprint that marine animals can use for navigation.

When whale sharks come to the Galapagos they are, essentially, stopping for directions, or calibrating their GPS.

Lastly, and importantly, the Galapagos Marine National Park, which was established in 1998, is a haven for endangered species such as whale sharks and scalloped hammerheads. If fisheries targeted somewhere like this, where endangered individuals are found in such dense concentrations, the species could quickly be obliterated from the area.

With the Galapagos being such an attraction for sharks, and whale sharks

on occasion, the research team have only to wait at a depth of around 15-25m until they see one.

Often a solitary individual will appear as if from nowhere. “You’ll be trying to scan the whole area, because you just don’t know where the shark will come from,” says Pierce. “It could be ascending from 30m, appear right at the surface or even come from behind you on the coral plateau. Usually, if there’s no current we’ll be hanging in mid-water doing 360s looking for them – but they still manage to sneak up on us!

“That’s why we work in teams – it helps give us the best chance of spotting a shark fast, so we can record all the data we need before it swims off again.”

His colleague Chris Rohner, who was capturing ID photos as well as taking video footage of the expeditions, told me: “We have only around one minute with each shark from when it first appears out of the blue. Then all the action happens in a flurry – tagging, ultrasound recording, blood extraction, tissue sampling.

“It was often tricky to get into the right filming position to capture the science work smoothly on camera while also getting the identification photo of the shark so we knew who we were working on. Luckily, we saw quite a few sharks, so

I had several chances to get the shots that made the story.”

As well as the photo IDs and video footage, there was a lot of data to collect: ultrasounds, blood samples and biopsies as well as attaching fin-mounted and pop-up satellite tags.

Dr Rui Matsumoto – the guy with the jetpack – was using a normal human ultrasound encased in a waterproof briefcase to conduct the scans. Weighing 17kg out of the water, it wasn’t at all hydrodynamic.

THAT’S WHERE HIS Rocketman-style jetpack came in. Because of their size, these huge sharks have a fast cruising speed, and often swim into the current to get more oxygen over their gills.

While swimming into the current slows the sharks down somewhat, it also means that Rui and the team have to battle the current too. Without his futuristic propulsion system, it would be almost impossible for him to keep up with the sharks and get his scans.

The team has about 30 seconds with each shark in total, so needs to operate like a well-oiled machine. Rui’s colleague Kiyomi Murakumo was taking blood samples while Jonathan Green and Alex Hearn attached fin-mounted tags to transmit the sharks’ position.

“After the first couple of days you get into a really nice routine,” Pierce told me. “It depends who sees the sharks first, but our highest priorities were getting the ultrasounds and blood samples. Anything after that was a nice bonus.”

The thickness of these sharks’ skin makes it necessary to use a pneumatic speargun to attach the tags: “The sharks don’t react at all. Whale sharks have the thickest skin of any animal, up to around 30cm thick, so they barely feel the tag. Sometimes they do turn around and swim past me again though – I guess they’re trying to work out what just happened!”

When the team started reviewing their data, what they found was pretty astonishing. Excitedly looking through the first ultrasound scans back on the boat, they found… nothing.

Well, not nothing – they identified reproductive organs, such as the ovaries, and even developing follicles.

On one smaller shark, they could even see that there was food in its stomach. But this was far from what they’d been expecting to see – evidence of pregnancy.

Undeterred, they tried again on more sharks. This time, they focused the scan on the large bulge behind the pelvic fin that they had always used as a visual indicator of pregnancy. 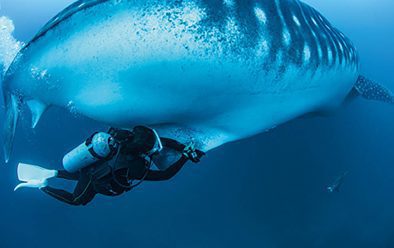 Still nothing – none of the images captured embryos or egg capsules inside the uterus. After scanning 18 of the 35 sharks they saw, they determined that these females weren’t pregnant after all!

Given how little is known about whale-shark reproduction, the successful use of ultrasound on the sharks is promising news in itself. Knowing that it works, Dr Matsumoto hopes it can now be used to judge sexual maturity and determine pregnancy of whale sharks in the field.

While these specific sharks weren’t pregnant, they might be on their way to mate further offshore.

FOR GREEN, WHILE these females aren’t going to give up their secrets easily, it’s a mystery he still hopes to solve: “One thing is clear,” he said, “there’s a lot of work still to do to understand the reproductive processes of this endangered species.

“However, this trip proved that it is possible to research their breeding in the wild. We’ll continue to hone techniques and build on this knowledge, as we need to understand these enigmatic sharks and protect them through their life-cycle.”

also hopes that future expeditions will bring the team “another step closer to answering the question: where do whale sharks give birth?”

In the meantime, she told me, GCT is working to improve the protection of whale sharks: “While the whale sharks found in the Galapagos Marine Reserve are protected, they are a migratory species and therefore are often found outside of protected waters.

“We’re working with partners, including GWSP, on a ground-breaking project to improve the protection of whale sharks and other migratory shark species as they migrate through the wider Eastern Tropical Pacific where they are at risk from industrial fishing.

“The ultimate aim is to create a protected ‘swimway’, or migratory corridor, between the Galapagos Marine Reserve and the Cocos Island National Park in Costa Rica, another marine biodiversity hotspot.”

Expeditions to Galapagos led by Simon J Pierce are offered by Aqua-Firma from 19-26 August this year, 4-14 September, 2020, and 6-13 September, 2021, and cost from $5590pp, aqua-firma.co.uk/destinations/galapagos; simonjpierce.com