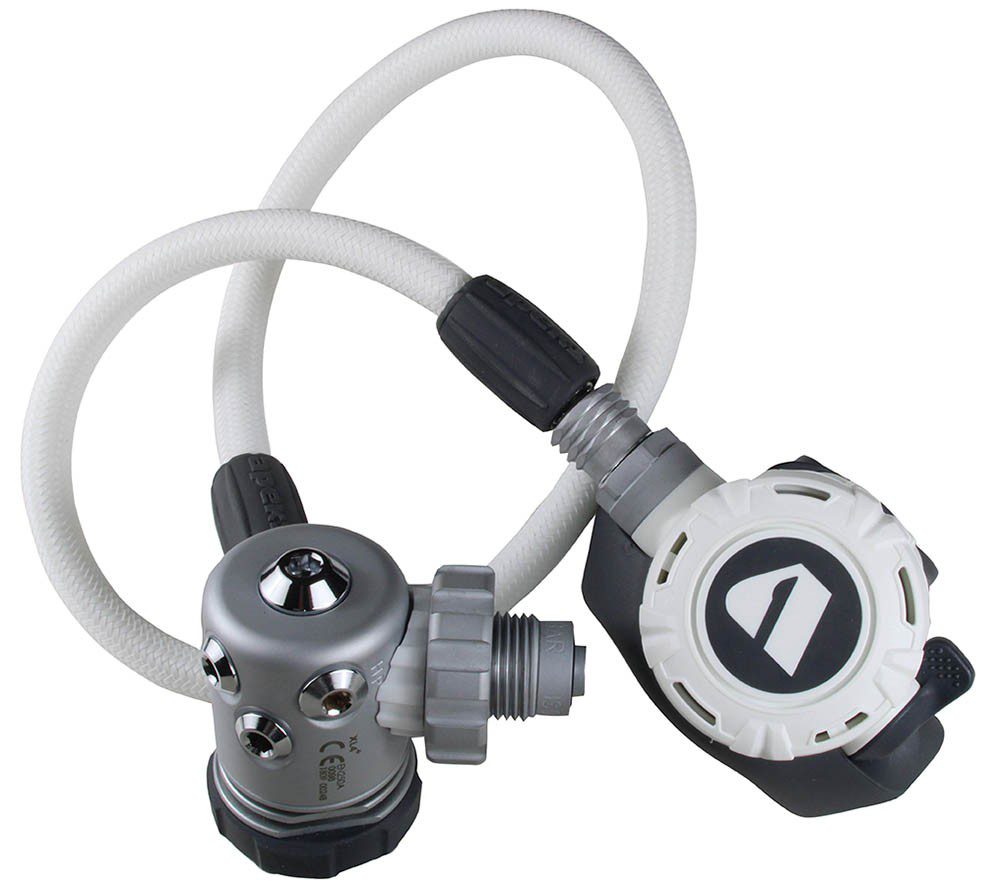 A few years ago, I was sitting on the boat after a dive in Watamu Marine Park, north of Mombasa on the Kenya coast, listening to a pair of South African divers congratulating themselves on purchasing environmentally sealed coldwater regs. These they said had gone on working despite a marked temperature-drop on the dive.

And indeed there had been a cold patch, a sudden sweep of cold current running from north to south that reduced the water temperature, for a short time, from 28° – all the way down to 24°. That’s Centigrade, not Fahrenheit, just in case you were confused.

Apeks clearly has a different definition of water that’s cold enough to freeze your regs. When I reviewed its XL4 last year, I talked about the work the manufacturer had done to produce a regulator with excellent freeze-resistance, so I was looking forward to testing the XL4+ in this regard.

As usual with Apeks the quality was oozing out of the unopened box, but when I did flip the lid I found that the XL4+ has a white second stage and a white low-pressure hose, braided rather than rubber for better coldwater performance.

The materials used have UV inhibitors moulded in to prevent discoloration to an unattractive yellow over time. 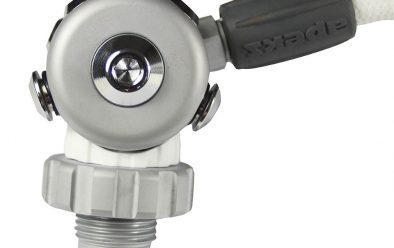 First stage from above, with the two backward-facing hp port-plugs slightly unscrewed so that you can see the positioning.

The first stage is, of course, still based on the DS4. It’s environmentally sealed and features the same maximised surface area. This allows for heat exchange and prevents icing, and the over-moulded end-cap adds to the anti-freeflow properties and helps to protect the regulator from knocks.

Four medium-pressure and two high-pressure ports are featured, and my only real niggle with the first stage is that the hp ports point slightly backwards, forcing the hoses you plumb into them to curve in a longer arc than strictly necessary – and a tank-transmitter can be less than well protected.

The lp ports are extremely well thought-out in terms of positioning, however, and on such a small first stage there isn’t oodles of room to place ports where you want them. 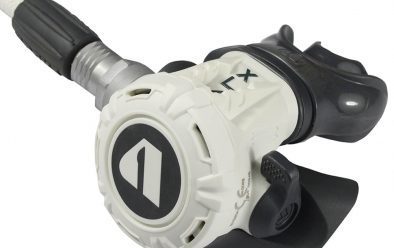 The second stage is as compact and lightweight as the XL4’s, and looks pretty much indistinguishable, colour apart.

Its light weight plus the positive location provided by the standard Comfo-Bite mouthpiece should make jaw fatigue a thing of the past. Certainly for me two-hour dives and four dives a day with the XL4 had been no issue.

The reusable clip that holds the mouthpiece in place and allows quick and easy replacement has also been retained.

Internally, the second stage continues with the over-balanced diaphragm design that allows the intermediate pressure between first and second stages to increase more quickly than ambient pressure on descent. The result is a regulator that Apeks claims breathes better at depth.

I couldn’t say that the effect was noticeable, but given Apeks’s reputation in the technical arena I’m not about to argue. The reg certainly stayed smooth at depth.

As you’d expect, there’s a venturi +/- switch to the left of the second stage, where it falls easily to hand.

As with the over-balanced design, I’ll admit that I’ve never really noticed much difference in breathing resistance when I’ve flipped venturi-equipped regs mid-dive to see what happens, though a friend who services regs for a living tells me I’m wrong, and that it make a very noticeable difference to him. Well, potatoes, tomatoes, the switch is there if you want it.

Time to see what the XL4+ is made of, and I waited until I could find some proper cold water, determined to see if I could make this baby freeflow. See how much dedication you get from us at DIVER?

What I did was attach it to a steel 15 and leave it immersed in a horse-trough outdoors overnight when the forecast was for frost.

The following morning the trough even had a thin layer of ice on the surface that I had to break before I could reach to press the purge on the second stage.

Gas flowed and, when I stopped purging, gas stopped. I pulled the second stage above the surface to encourage icing, and tried again.

I stood the bottle up to encourage the wet first stage to ice up, re-dunked the second stage to make sure it was wet and still couldn’t make the XL4+ freeflow.

And don’t think I just tickled the purge; I hit that sucker good and hard and held it down for a fair while before releasing it. Actually, 30 seconds, reasoning that even the slowest breathers among us won’t take only two huge breaths per minute.

I’ll be the first to admit that it wasn’t a scientific test, but after that I’ll just say that I had no hesitation using the XL4+ in water at 2°. That’s still Centigrade.

What else? Well, the XL4+ works really well as a reg, breathing smoothly and staying dry regardless of orientation or depth, but that wasn’t exactly a revelation.

This regulator is an all-round excellent performer, just like the XL4 before it.