As divers get older, if they’re sensible rather than getting bolder they learn to tailor their diving to their capabilities. But eventually there may come a time to take stock, as JOSS WOOLF reports 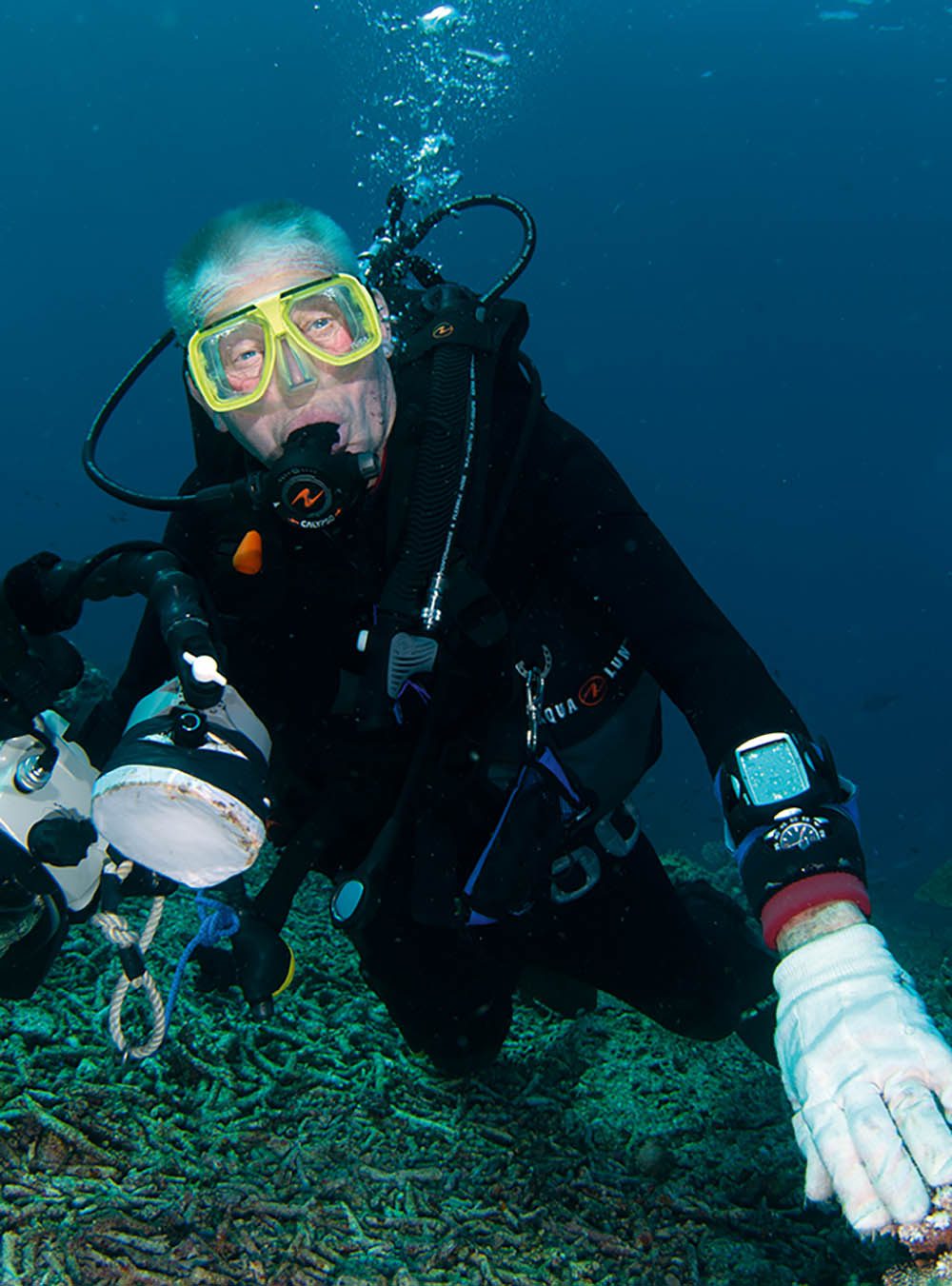 PRINCE PHILIP’S RECENT road accident and subsequent retirement from driving at the age of 97 has made a number of people face the question of whether they should still be behind a wheel in their old age.

It’s such a difficult decision to make, when you either depend on driving to stay in contact with society and for shopping or, simply, because you love it.

My own father insisted on keeping up his insurance and road tax for several years after he had given up driving, just so that he had the option – even though we knew he would never take it.

The same surely applies to diving. A week after his 90th birthday, in April 2013, Stan Waterman, pioneer of underwater photography and cinematography, and famous for his filming of such epics as Blue Water, White Death and The Deep, carried out his final dives from the luxury of the Cayman Aggressor.

“Having reached the age of 90, I have entered an age of hedonism,” he was quoted as saying. “Delights like being comfortable, air-conditioning, lots of hot water, home-made food – that’s the Aggressor.”

This coming June, our usual brigade of dedicated divers will head off on the annual pilgrimage to the Red Sea. One will be 83, and several others have already exceeded their three score years and 10.

A couple of years ago one newcomer changed his mind and dropped out after deciding that we were all too old! I think only one of us was under 40. However, it could be argued that is simply the demographic of the majority of the diving fraternity today; we’re a relatively mature bunch.

On that same trip another chap was told, after he’d booked, that he was no longer allowed to dive because of a heart condition. He came along anyway, and was content to sit and read.

After the ritual of completing our waiver forms before the boat could depart, the Cruise Director (that modern, elevated term for a dive-guide) decided that another of our group should seek the approval of a diving doctor, because he had ticked a box to declare that he was on steroids.

Although this meant that our entire group was obliged to wait half a day for the result, thankfully he passed the test.

He was probably fitter than the person who examined him, a doctor whose considerable girth posed an obvious challenge merely in standing up.

FINALLY WE ARE UNDER WAY. However, it was clear that the dive-guide (sorry, Cruise Director), had taken one look at us and said to himself: “Huh! No RIB-diving for you lot”, and we all had to make do with dive-sites that required only a not-so-giant stride off the back of the boat. Still, who am I to complain?

Talking of giant strides, last year our octogenarian, despite his long legs, didn’t quite do a big-enough stride, and the bottom of his tank hit the deck.

This caused the top of the tank to hit his head, and there was much blood.

He was banned from diving for the next four days by a retired GP guest we were lucky enough to have on board.

Unfortunately, on the last day when we all thought it would be safe for the casualty to do the last dive of the trip at only 12m, and although he was assisted by two members of the crew, this time he entered the water in such an awkward manner that he actually cracked several vertebrae in the process.

But he is still looking forward to coming again this year!

So, back to the morning of day one, and it was time for the dive-briefing upstairs. I was just thanking my lucky stars that I probably still had a decade or two to go before I’d start to suffer the consequences of age-related illnesses when I missed my footing (tripping on my sarong) at the top of the highly polished wooden staircase on Whirlwind.

I fell down the entire flight, instinctively protecting my precious camera, as you would a small child, all the way. Miraculously, thanks to my generous “padding” no real harm was done to anything other than my ego.

From my screams, the rest of the group, patiently awaiting my arrival upstairs, had visions of blood and broken bones at the very least.

THERE ARE, AS IT HAPPENS, some advantages to being a little more mature: years of experience, a broad knowledge, perhaps a little more money in your pocket, consideration for and a tolerance of other people’s habits as well as being expert drinkers!

There is also the great wealth of after-dinner stories that are reeled out year after year, and it doesn’t matter that we may have heard them all before because we can’t remember them! 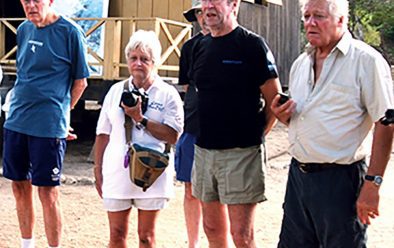 ‘Living fossils’ at the World Heritage Site in Komodo – Joss Woolf’s description, not ours!

Then there is the deafness. On a recent visit to Komodo, our lovely queen-of-the-60s Linda jumped into the sea at the beginning of the trip with her hearing aids still in.

This was not so that she could hear the fish. As any self-respecting underwater photographer will testify, water and electronics do not make good bedfellows.

It was actually quite a tragedy, because without the aids she is stone deaf. But it didn’t stop her asking us questions all the time to which she couldn’t hear the reply!

Many divers suffer from hearing loss later in life; it goes with the territory, but it can be quite entertaining listening to two elderly deaf divers shouting a conversation at each other.

Uh-oh, the first camera flooding has taken place. Never leave your camera in the rinse-tank. The water gets warm – actually, it gets quite hot – and the metal housings expand and the water seeps in.

I can remember on one of these trips that there were no fewer than six floods, all for different reasons, but the best had to be the most recent. It was the last dive of the last day and, at the last moment, the hapless gentleman concerned decided to change lenses.

This also required a change of port, but what he forgot to do was put any port at all onto his camera housing.

Then there are all the bad backs. One of our group, who hadn’t dived for a couple of years, had piled on the pounds and it was probably quite some time since he had last seen his feet.

Having to carry all that weight – as well as a 15-litre tank – is no mean feat! Hardly surprising that something had to give. Still, you can always make up for the loss of diving days by having some very expensive massages at $83 per hour.

BUT IT’S NOT ONLY large or older people who get bad backs; some of the leanest, fittest divers can suffer in the same way. And neither are accidents confined to the elderly; they happen to people of all ages.

On a recent trip to the Azores, we were happily dangling on a rope at 15m waiting for blue sharks to come along and inspect us.

Suddenly, like an Exocet missile from above, a diving cylinder complete with BC and free-flowing regulator could be observed hurtling, much to the surprise, no doubt, of some rather startled crabs, to the seabed 147m below.

It took a few moments to realise what we had just seen. The rig’s former owner (because it now belongs to the sea) had decided to abort the dive while still at the surface. He had handed up his weightbelt (at least he remembered to do that first) but had forgotten to put any air into his BC. The weight of his still-full steel tank was all it took.

Let that be a warning to us all. 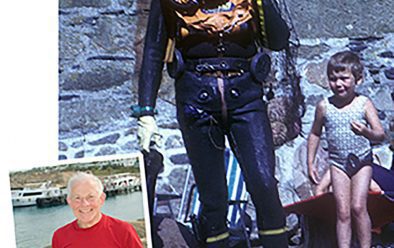 Ken Sullivan now (inset) and on his very first dive in 1965. His daughter, seen beside him, is now a grandmother.

I asked two of our older diving comrades, Ken Sullivan and Colin Doeg, one who is still diving and one who has given up, for their views on when to stop.

Ken is well into his 80s and still dives regularly: “An old friend once told me that the only problem with growing old is that you start to lose your friends.

“This also applies to your dive-buddies, to the point that not every diver, particularly underwater photographers, wants to spend his entire dive looking over his shoulder to check if their ‘old buddy’ is still in this world.

“I’ve had some experience of this, and it’s not fun for either diver. There are lots of what-if’s in this, but it has to be faced by all divers and clubs, to keep us all safe in all conditions.

“That includes divers who don’t want to stop diving and think they’re just fine. As long as a diver has regular annual medicals and is not just buying insurance for the trip, and has a consenting and aware buddy, there should not be a serious situation.”

MEANWHILE COLIN, co-founder of BSoUP, is now 91: “Every time I glimpse a suitable stretch of water or an intriguing length of coast I yearn to slip in with a camera and search for some striking photos, but I still believe I made the right decision 11 years ago that it was time to stop diving. 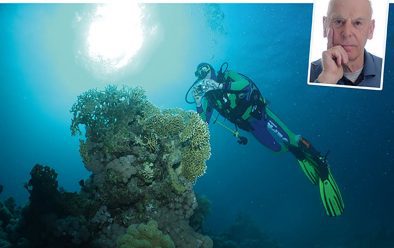 “After all, I had enjoyed 50 years of getting wet, and am still around to show some of my photos.

“In their own way I hope that everyone who dives today gets the same pleasure and excitement that I have enjoyed, but I count myself lucky to have done most of my diving when everything was, shall we say, less regulated.

“Indeed, as soon as things became more regulated some of the more adventurous and entertaining spirits immediately turned to hang-gliding.

In those early years it was easy to walk in from the shore, dive on your own from a Zodiac when no-one else was around, or slip into a salmon run when all was quiet.

“We were pioneers, breaking new ground all the time; we were doing something few others ever dreamt of doing. Based on the UK population, one member calculated that every underwater photographer was a person in a million.

“Of course, there is a time to stop unless you want to come home in a body-bag or have helicopters and lifeboats searching for you.

“I enjoyed my last week of diving in the Red Sea. I was with a very select group of friends. I could still kit up and step off the end of the dive-boat without any assistance… and get back up the ladder. But I couldn’t fight and play the currents as I used to, and I also got puffed.

“The decision was made easier by the fact that I have always enjoyed even more my holidays with Mary, my wife, and I knew I had many more holidays to look forward to.”