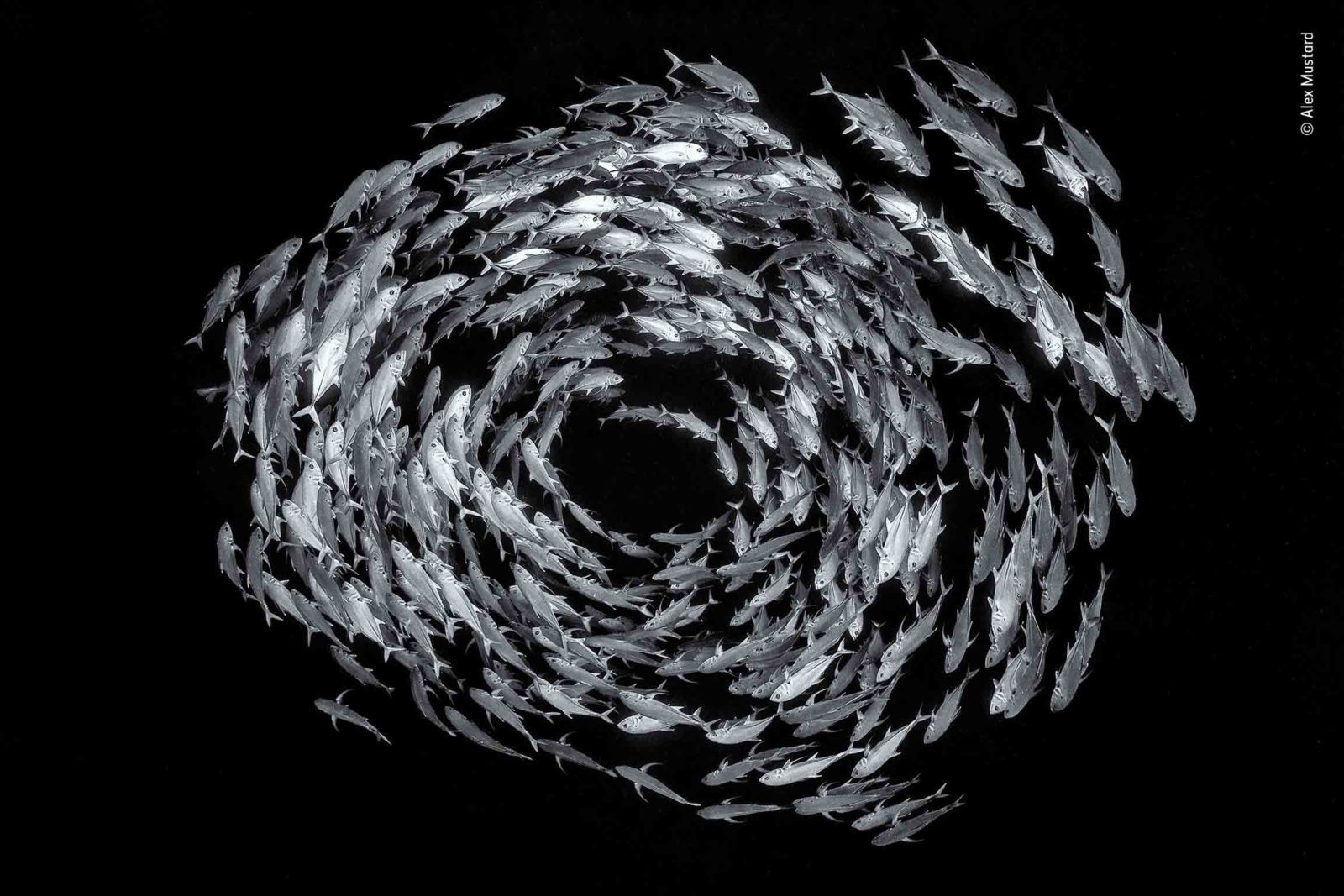 This black & white image, Circle of Life, has been Highly Commended in the prestigious 55th Wildlife Photographer of the Year competition.

One of 15 preview images released by the contest organiser, London’s Natural History Museum, it was taken by Alex Mustard, who contributes the Be The Champ! underwater photography column to DIVER magazine every month.

Mustard has travelled regularly to the Red Sea for the past 20 years to photograph the summer spawning aggregations of reef fish.

“The big lure is that I always see something new,” he says. “This time, it was the high numbers of bigeye trevally.”

The circling behaviour of the fish, photographed here at the edge of the reef at a depth of 25m, is described as a “dating exercise” prior to pairing up, although it also deters predators. Such spawning gatherings could easily be fished out if the Ras Mohammed national park were not a no-fishing marine reserve.

A lens system with a 130-degree angle of view was used to capture the shape of the shoal against the deep blue water below, with the iridescent angled fish reflecting the light from the sun and the strobes.

The 2019 Wildlife Photographer of the Year competition has attracted almost 50,000 entries from professionals and amateurs across 100 countries, says the NHM.

The 100 winning images, selected for their creativity, originality and technical excellence, will be announced at an awards ceremony at the museum on 15 October and go on display there three days later. The photographs are later sent on a UK and international tour.

The competition showcases the world’s best nature photography and photo-journalism as an artform, says the NHM – setting out to “challenge us to consider both our place in the natural world and our responsibility to protect it”.

Two other underwater images are among the Highly Commended entries released. One, Touching Trust, is also mono and shows a young grey whale approaching a pair of hands reaching down from a tourist boat in Mexico. It was taken by German/South African photographer Thomas P Peschak.

The other, Jelly Baby by Fabien Michenet of France, is a blackwater shot from Tahiti showing a juvenile jackfish inside a small jellyfish that it has adopted as an overnight travelling shelter.

Find out more about the competition here.