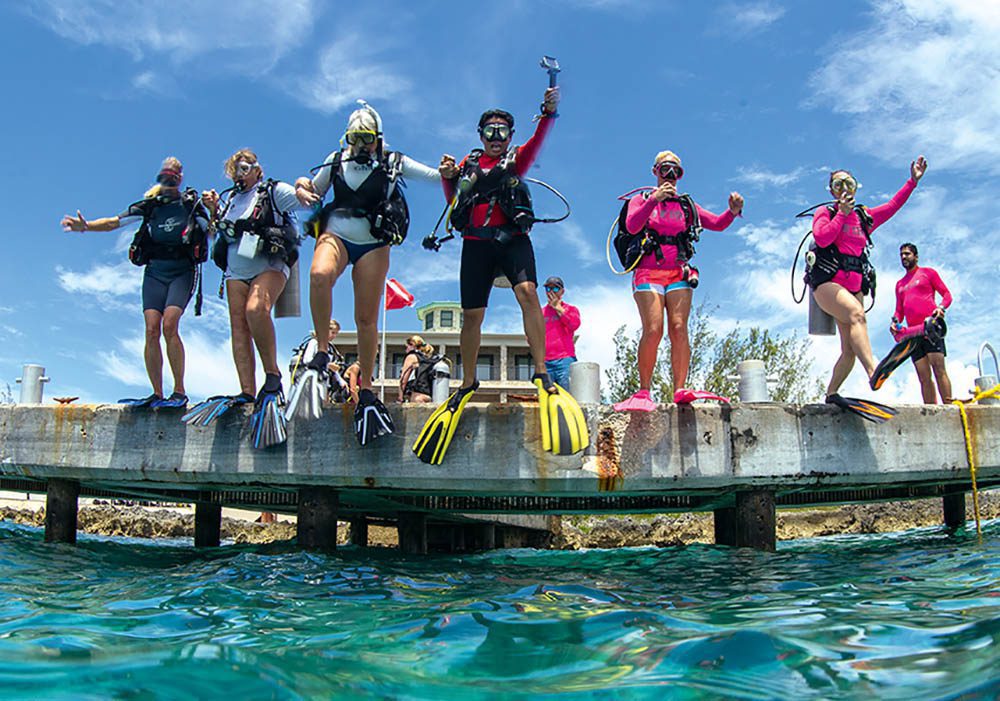 Lisa’s group jumps in from the dock.

I held tightly onto the rope and the hand of the lady next to me. Looking down, I saw a small soldierfish gazing quizzically back up at me from a couple of metres below.

Turning to my right, I could see in the far distance woman after woman, holding one another’s hands to form a chain along a line strung between three buoys, extending further than I could see.

I was taking part in a Guinness World Records attempt, on International Women’s Dive Day in July.

The record was for the longest female scuba chain, and the event was organised by Divetech, a company in the far west of Grand Cayman Island, owned and run almost exclusively by women.

It was a second attempt. The previous year a line of 87 women had been attempted, but the record wasn’t upheld because the strict GWR guidelines had not been met. This time, nothing was to go wrong.

Check after check was made both before and on the day to ensure that this time round the world record would be official.

Arriving early that Saturday morning, I had managed to park my car near the dive-centre and carry my equipment to my assigned group’s official set-up space in the dive-centre.

Women dressed in fluorescent pink tops were busy setting up tanks, checking participant lists and ensuring that everyone had enough weights before getting down to organising the groups as they arrived.

This year 120 women had signed up to take part, paying the KY $25 entrance fee that was to be donated to the Cayman Breast Cancer Foundation.

Men were allowed to attend the event, but only as support staff of course.

My dive-buddy Maria and I set up our tanks and waited while Julia from Divetech’s staff briefed us on how the event was to unfold.

Most important was that we had to continue holding hands for the duration of the record attempt. Three videographers, two men and a woman, would be filming along the 100m-long line three times over, using underwater scooters to help them move along it quickly.

Divetech’s owner Jo Mikutowicz was our group’s leader. Each group had someone from Divetech or another island dive-centre that had offered help with both staffing and equipment.

As more people arrived, I could see that there was a whole mix of women from different walks of life. Their diving experience ranged from newly qualified to instructor level, and their ages from teenager to retiree.

It was heartwarming to see the joy and excitement on their faces. The dive-centre buzzed with camaraderie as women found their groups and introduced themselves to each other.

From the dock our group would make giant-stride entries and swim to the buoys around 50m offshore, Jo told us. We would descend just before these and hold the rope strung between them at around 5m. We should hold the rope with one hand and the next woman’s hand with the other.

As I had my camera with me and we were the first group in, I jumped in just before the others to take some photos of their entry. 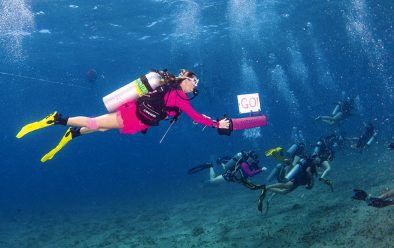 Julie with her pink DPV bearing the GO sign.

I signalled that I was ready and gave a ‘123’ countdown before my group held hands firmly and jumped together, my buddy Maria front and centre.

As they surfaced, laughing, Jo instructed us to inflate our BCs and follow her, resplendent in fluorescent pink rash-vest, fins and mask and swim on our backs to the furthest buoy on the left.

I got the space at the end of the line, giving me room to sling my camera over my arm while the record bid was made.

Julia was on a DPV, bright pink naturally, with a sign saying “GO!” on it. She had told us that once the line of women had been checked for hand-holding and everyone was ready, she would drive up the line to signal that the record attempt was underway.

There was now a sense of nervous excitement as we looked at each other, praying that we wouldn’t be the one to break the line at a critical moment.

It would be easy to forget, when your mask is slightly uncomfortable or you need to equalise or even scratch your nose, how using your hands to do any one of these would break the chain and disqualify the record attempt.

Being made aware of this made it even worse. It was like being told not to blink for a photograph and feeling that blinking was all you wanted to do.

My nose began to itch constantly, and I had an almost overpowering need to adjust my mask. But I kept my hands squeezed firmly over my partner’s and onto the rope.

Relaxing into it eventually, I began to look around the small coral outcrops, spotting fish darting in and out of them, and that little soldierfish.

Time seemed to stand still as we hovered on that line. It was a slow process, checking that everyone’s hands were together while the videographers did their job.

Finally we were ready. Julie gave a thumbs-up and drove slowly along the line once, before returning to tap each of the group leaders. They had been floating in front of their groups in case anyone needed help adjusting their buoyancy, and were now required to take their own places on the line.

Again the videographers filmed us, until satisfied that they had enough footage of the unbroken chain of women.

Thirty minutes after our dive began, Julie proceeded down the line to tap each group leader on the shoulder, signalling that she could release her hold.

All along the line we could see women pumping fists and making cheering sounds through their regulators in celebration of the successful record bid. As our turn came to let go we did the same, with a real sense of joy at being part of this momentous occasion.

Jubilation on completion of the record bid.

Jo led us back towards the dock and we surfaced to join the many other women chattering away excitedly.

As we took turns to climb the exit ladder, we could see a crowd of spectators cheering us from the restaurant.

De-kitted, we toured the various stalls raising money for charity, while enjoying a glass of champagne and some lionfish ceviche. The number of women who completed the record totalled 107 and KY $6500 was raised for charity.

Another such event is planned for next year, and I certainly plan to attend. If you would like to do the same, check the divetech.com website or contact the dive-centre at info@divetech.com