Ghost Diving – but only outside UK

Ghost Diving – but only outside UK 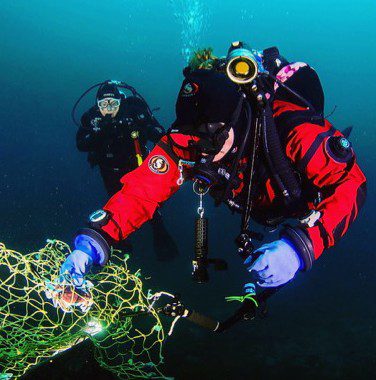 Ghost Fishing, the original body of divers dedicated to clearing fishing-nets discarded at sea, has changed its name to Ghost Diving “to make it easier for the public to understand what it does”. However Ghost Fishing UK, until now one of its chapters, has gone its own way and is retaining its name.

The Netherlands-based Ghost Fishing organisation was started in 2012 by Pascal van Erp, and now works on environmental projects with volunteer divers in various parts of the world. With chapters in the Adriatic, Costa Brava, Egypt, Greece, Korea, Lebanon, New Zealand and Poland, the charity has, says van Erp, “managed to bring the ghost-fishing problem into the public spotlight”.

“We decided to rebrand our organisation and bring the divers on centre stage, as they are the ones who recover the lost fishing-gear,” says van Erp. “They deserve recognition for their truly heroic efforts.

“Our goal is that in only a matter of time our new name will become a generic term for all divers working to remove ghost-gear from wrecks, reefs or the seabed.”

Meanwhile, the volunteers who make up Ghost Fishing UK, set up in 2015 and now one of the largest chapters with almost 100 members, have voted unanimously against changing their name, and are set to go it alone.

“We are a ‘household name’ in the diving industry, we are recognised at government level and we are a UK-registered charity,” says chair Rich Walker. “We work with several universities and are developing methods of collecting meaningful data on the problem.”

An important reason for retaining the Ghost Fishing UK name is that the charity is increasingly gaining non-diving members, says Walker. They are able to help with activities such as moving nets, counting trapped animals and recording dive data.

“We do not wish to curtail this by changing to a name that implies our work is only about diving,” he says. “We are so much more than that.”

Referring to the Ghost Diving chapters, he adds: “We remain united in our missions and wish each other well in our dedication to cleaning up the oceans of deadly ghost gear.”