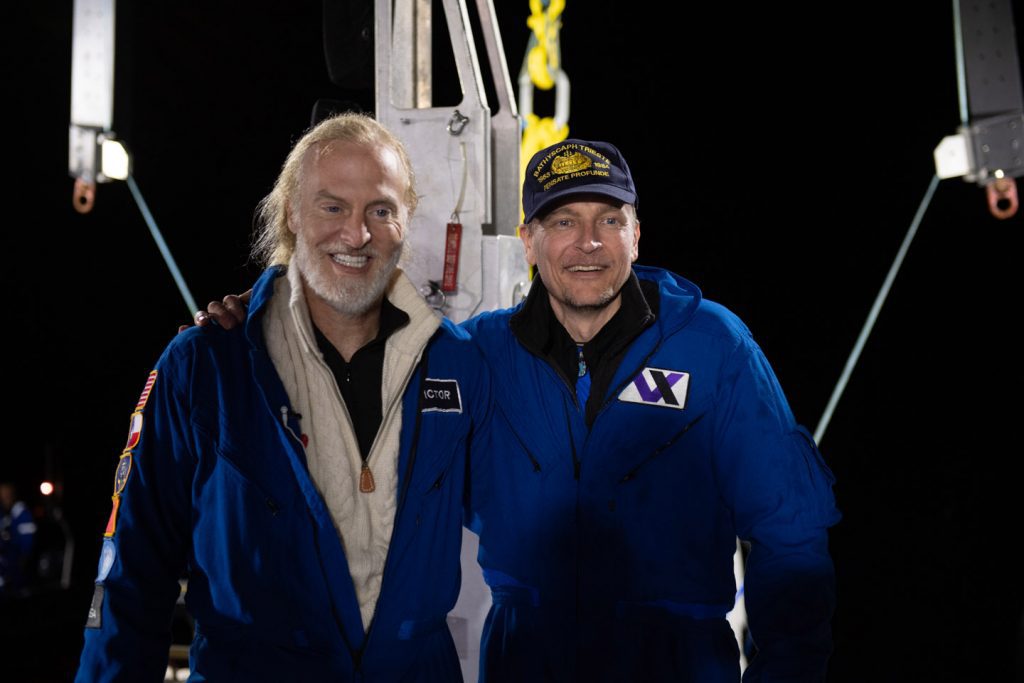 Fifty-two-year-old American Kelly Walsh has undertaken a 10.925km-deep submersible dive in the Western Pool of Challenger Deep – the location famously first visited by his father Captain Don Walsh in the bathyscaphe Trieste 60 years before.

The 20 June dive, timed to coincide with Father’s Day weekend, was carried out aboard the two-person Triton 36000/2 submersible Limiting Factor, piloted by its owner Victor Vescovo. It was the latest dive in this year’s “Ring of Fire” expedition, jointly organised by EYOS Expeditions, Vescovo’s Caladan Oceanic and Triton Submarines.

Challenger Deep, the deepest location on Earth, lies in the Mariana Trench 200 miles south-west of Guam. The dive took 12 hours, with Vescovo and Walsh covering almost two miles as they spent hours traversing the seabed at the bottom.

“It was a hugely emotional journey for me,” said Walsh, once back on the expedition’s mothership DSSV Pressure Drop. “I have been immersed in the story of dad’s dive since I was born – people find it fascinating.

“The leap in technology from 1960 is immense. Dad spent 20 minutes on the bottom and could see very little. I had the opportunity to spend four hours on the bottom with excellent lighting and a 4k camera running the whole time.

“We had complete control over our vehicle; great lighting, manoeuvrability and a comfortable cabin, whereas dad had none of those things. The Limiting Factor is an amazing vehicle; a true platform for exploration and a credit to the ‘out of the box’ innovation at Triton Submarines.”

Don Walsh has long been a scientific advisor to EYOS, and was aboard Pressure Drop last year when Vescovo become the first person to dive to the deepest point of each of the world’s five oceans.

“Kelly’s mom and I are so pleased and proud that Kelly got to experience the same adventure I had 60 years ago with the Navy’s bathyscaphe Trieste,” he said. “He grew up with the continuing story of my history with deep ocean exploration, and now he’s part of it.”

Kelly Walsh is only the 12th person to have visited Challenger Deep. His father made the first descent with Jacques Piccard in 1960, and it was not visited again until James Cameron made it aboard Deep Challenger in 2012.

Vescovo visited the site twice last year in Triton and has since returned with various passengers. Earlier this month (7 June) he was accompanied by 69-year-old Kathryn Sullivan, who as a Space Shuttle astronaut in 1984 was the first woman to walk in space, and is now the first to have visited the deepest point on the planet.

A series of dives in the northern Mariana Trench is next on the agenda for Vescovo’s team, working with the US National Oceanic & Atmospheric Administration (NOAA) to explore a number of sub-10km deeps never before visited by humans.

The expedition is set to climax in a bid to make the deepest-ever wreck-dive, visiting the WW2 naval battlefield off Samar Island in the Philippines at a depth of more than 6km.

“My father and I dived in the same place, but with very different technology,” said Kelly Walsh. “My dive heralds the next generation of deep-sea exploration; we now have the technology to explore any part of our ocean. No one could be happier about this than my father or me.”